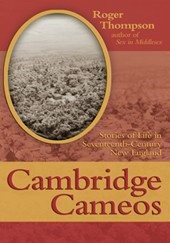 Reading Alicia Crane Williams’s post on Sex in Middlesex reminded me of another great work by Roger Thompson – Cambridge Cameos – Stories of Life in Seventeenth-Century New England, which contains forty-four sketches from the period 1651 to 1686. They are fascinating stories involving mostly ordinary people. Some of the more colorful chapters cover Brutality or Bloodsucking; Town versus Gown; Witchcraft or Madness; and A Subversive Physician. These vignettes are based on thousands of original documents Thompson examined that provide a rare chance to hear firsthand accounts of many seventeenth-century New Englanders.

This book came out in 2005, a year before I began working in Publications, but I was interested in the title on the chance that it might shed more light on my ancestor William Healey (ca. 1613–1683) of Cambridge. A Healy genealogy had the following intriguing item regarding this immigrant ancestor:

“An esteemed citizen, a church member, a landholder, and prison-keeper for ten years from 1672 to 1682, at the age of seventy years he was charged with a misdemeanor. Fabricated accusations prompted by jealousy or vindictiveness were not uncommon in the Colonies between 1656 and 1692. He died within a year, 11/28/1683, and his remains lie in ‘The Old Burying Grounds’ in Cambridge.”[1]

I had never had a chance to research this “misdemeanor.” I thought maybe Roger Thompson found something more on William. I quickly found a chapter entitled “William Healey, Married Man, 1661–1683” on pages 123–28.

Thompson in part went through numerous pages of Middlesex County Court records at the Massachusetts States Archives as cited in this chapter. William Healey was married five times and had thirteen children by his first four wives. The first part of this chapter discusses allegations by William’s fourth wife and mother-in-law of physical violence against members of his household; Thompson also highlights additional evidence that cast doubt on some of the credibility of certain witnesses. However, the more colorful story concerned Healey’s time as prison-keeper, which Thompson states was often a means of employment for poor townsmen. Testimony is taken from Deborah Cane, 28, who went to visit the jailer’s quarters at Cambridge prison in October 1682:

“The door being ope[n], she first called and then went upstairs to the prison chamber. [There she found William and] Mary Lovell who was near her time with a bastard both half naked, to her great amazement and shame, so that she turned back and left them together.”

Mary later admitted “She could not help it… It was not the first time; he had done the like more than once before.”

At age seventy, William was fired as jailer and lived in a cell that winter. The former official court flogger in April 1683 was himself sentenced to twenty stripes for having committed fornication with his pregnant inmate. Some misdemeanor! William went on poor relief after his termination and died a few months later with only six pounds to his name.[2]

If you have ancestors in seventeenth-century Cambridge, you may very well find more about them than you were expecting from this terrific work!