At an earlier stage in my research, I was surprised to find my great-great-grandmother living in Phoenix in the household of one of her younger sons;[3] indeed, this sojourn proved to be brief – but long enough for Jennie Jackson to appear in the 1920 census, far from her residence in New York.

5 August: Took trip to Annapolis with Estelle to arrange for Fred at preparatory school. Went from there to New York and returned on the 9th.

30 August: Fred left tonight on the Chesapeake Line for Annapolis where he enters a preparatory school[4] for the Naval Academy.

28 November: Fred spent Thanksgiving with us.

25 December: Christmas morning. Our little family all alone and happy. Lots of callers in the afternoon and evening, when we enjoyed a wonderful bowl of eggnog.

See no hope for drinks on future Christmases.[6]

27 December: Frances[7] took part in an entertainment at Christ Church. 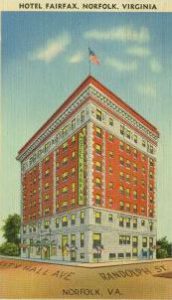 The Bells were becoming a naval family:

26 February: Estelle went to Annapolis to visit Fred, and from there to New York.

14 May: Fred received notice from Col. Holland that he passed the Annapolis Exam.

9 July: Getting along without anyone on the farm. Labor very hard to get.

7 August: Estelle, Frances, and I went to Annapolis to visit Fred. After which we went to Baltimore, Washington, and Buena Vista, Pa., where Frances first saw the mountains.

1 October: My 42nd birthday. Estelle made cake and candy and I was admitted to the firm[10] today with an interest of 25%, thus making it a very happy day for me.

[6] The Eighteenth Amendment, banning “intoxicating liquors,” was ratified by the necessary number of states on 16 January 1919 and went into effect on 17 January 1920.