Joseph Kenny was a soldier in the 169th infantry, 43rd Infantry Division, during the Second World War. He was born in 1910 in Rhode Island, one of the nine children of Michael and Catherine (Mangan) Kenny – both Irish immigrants. My great-uncle Joseph died on 11 August 1944 in the Philippine Islands.

He was stationed at Fort William McKinley. Although we don’t know much about how Joseph died in combat, we do know a lot about the after effects of his death from the telegrams and letters written by the Kenny family to the Army for more than a year – all trying to learn about Joseph’s last days on Earth. My grandmother also received letters from Joseph’s army buddies marveling at his effect on his unit. Stanley E. Johnson, an Army friend, wrote to my grandmother in August 1944 saying, “Joe was known as a great morale builder in Company C.  Even when the going was tough with him and the boys, he always had something to say to give the boys a laugh. I don’t think half of the boys would have gone as far as they did, if it wasn’t for him building up their morale.”

The kind and poetic nature of Charles’s writing always brings a tear to my eye.

Now, as we celebrate Memorial Day, I am grateful for my great-uncle. As part of my family collection, we have the following letter, which was written to my grandmother Camilla (Kenny) Dery in October 1944 by a war correspondent from the Providence Journal-Bulletin, Charles H. Spillman. Charles’s letter gives us a glimpse into Joseph’s final send-off. The kind and poetic nature of Charles’s writing always brings a tear to my eye. I’m hopeful that his letter helped my family grieve the loss of their son, brother, and friend. Charles wrote to my grandmother again in December 1944 reporting a conversation he had overheard about Joseph between two officers: “It was a great loss when he was killed, because there aren’t many men in the world with his personality.”

You will remember that before I left I promised you I would find Joe. I have kept that promise. It was not as either you or I would have willed it, but perhaps you would like to hear about it.

It is Sunday here, although it is still Saturday where you are. There is a long road paralleling the shore, a road heavy with grey dust which the passing trucks throw up in clouds. A way along this road a side road turns off towards the beach. 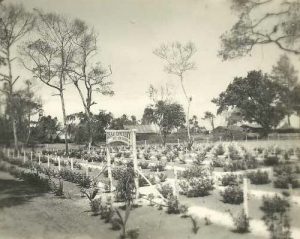 You walk a little distance with the sound of the sea loud in your ears and then you come to a white fence. An arch of wood frames a gate. From it a path of white coral leads on to a tall pole from which an American flag flies. On either side of this path the white crosses stand row on row.

It is in the fifth row on the left, the fourth cross. It has his name lettered neatly in black, the designation of his company and regiment, the hospital in which he died and the date, Aug 11 1944.

You can walk down a path of crushed coral, white in the sunlight, and stand before the cross.  Between you and the cross a small plant with broad green leaves pushes up from the sandy soil. It has blossomed since the rain of yesterday, deep pink trumpet-shaped blossoms.

A tall tree raises its gnarled and twisted trunk to the sky a little to one side. Its branches bend toward the cross and soften somewhat the harsh sunlight. The wind blows softly through its branches, and the sea rolls loudly in with the song of eternity.

You know how he died. Johnson told me he has written you.

They brought him back from the jungle, from the river where he fell. The men of his company filed slowly through the white gate and down the coral path. Men who had fought beside him, who had prayed beside him as he died, bore him more slowly still. The chaplain walked behind.

They laid the litter on support besides the open grave. The chaplain opened his book and read words which have been repeated all too often since war began. An officer gave a command. Seven men raised their rifles to their shoulders. Three times they fired and three times the echo of their firing crashed through the trees which hold the little cemetery close. Softly a bugler breathed the slow notes which end the day for men of the Army. The soldiers who had borne him so far gently lifted the flag which had covered the brown blanket in which he was wrapped. Carefully they folded it and handed it to the company commander.

Then the men turned toward the flagpole. Slowly the flag there which had been at half mast, rose to the top of the pole. The men turned again and slowly walked from the grave, back down the coral path and out through the gate, leaving him there, alone with his God…