I recently attended a gala celebrating the 150th anniversary of my high school in Portland, Oregon. When I was a student there, and even at its 125th anniversary, Lincoln was billed as the oldest public high school west of the Mississippi. However, it turns out that Lowell High School in San Francisco (presumed to be private because it’s open to only a few select students, like Boston Latin) was actually the first. Curiously enough, both schools use the colors red and white; they share the cardinal as mascot. This coincidence is even stranger when one considers that zero cardinals live on the West Coast!

But I digress. You’re probably wondering, “Why is she writing about her high school, anyway? What does that have to do with family history?” In this case, there are a lot of family connections. For instance, I spent most of the evening with a friend whose two older siblings and young adult son were all there as former students, and her aunt also served as Lincoln’s principal from 1989 to 1992.

…Grampy had also attended Lincoln, where he met his first wife in math class.

Our own principal (looking much the same, four decades later!) was with his wife at the next table; they lived across the street from my grandparents when I was in high school … and Grampy had also attended Lincoln, where he met his first wife in math class. Then I caught a glimpse of Grampy’s brother’s daughter and her husband, who served as Lincoln’s principal between 2000 and 2006.[1] 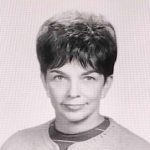 Some other family connections featured at Lincoln’s 150th anniversary celebration are familiar to many of you readers. The featured speaker was Matt Groening, creator of “The Simpsons” and “Futurama,” and a member of the class of 1972. Matt confirmed that – just like Bart Simpson – he has sisters named Lisa and Maggie, and his mom’s name is Margaret (or Marge, as they’ve redubbed her). He even showed us a picture of his mom with big hair, which he assured us appeared even taller to a small boy looking up from the ground.

He also confirmed that Crusty the Clown, as we all suspected, was based on local cartoon-show host Rusty Nails … played by a man who happened to be a drama coach at Lincoln during Matt’s years. That was something we’d never suspected! Matt also dispelled the belief that Homer Simpson’s evil boss was based on Mr. Bailey, who retired last spring after teaching at Lincoln for fifty years.

Matt was a student at Lincoln when its then-most-celebrated graduate, Mel Blanc, spoke at the school’s centennial celebration.

Matt was a student at Lincoln when its then-most-celebrated graduate, Mel Blanc, spoke at the school’s centennial celebration. According to the voice actor’s biographical sketch on Find-A-Grave, Mel Blanc was Matt’s soul brother. They both terrorized teachers and administrators with their bad-boy antics, but I’m sure “Bugs Bunny” never dreamed he was passing the mantle of cartoon greatness to a young man in the audience when he visited his alma mater in 1969.

I’m lucky to possess my maternal grandfather’s actual high school yearbooks, and even my great-aunt’s diploma from Lincoln, but I’ve been able to make discoveries about other relatives through digital yearbooks and other school ephemera online.

I found out where my great-great-grandfather lived in Boston thanks to the 1855 Chauncy Hall school directory, and I discovered that his mother was one of four boarding students from Nantucket at Boston’s Young Ladies’ High School in 1831. According to the school’s catalog, they offered quite a progressive education for females at that time, teaching Latin (in addition to French, German, Italian, and Spanish), plus Algebra and Geometry, Rhetoric, Astronomy, and Ancient and Modern Geography.

While it’s great fun to see what your relatives looked like in high school or college, don’t stop at the pictures. Be sure to check out whether they were in drama, or ROTC, or on the track team … and take time to check out who else was there with them. I discovered that Agnes and Margaret de Mille (nieces of film director Cecil B. DeMille)* were in the same sorority as my paternal grandmother, thanks to the 1926 UCLA yearbook. And no living soul knew that my paternal grandfather was a classmate of his future son-in-law’s stepfather … until I found them on the same page of Berkeley, California’s University High School yearbook for 1924. My cousins were amazed to know that “Papi” and “Dadoo” had gone to school together! Who knows what discoveries you can make!

[1] Believe it or not, there are actually quite a few high schools in Portland, and even my mother and brother did not attend Lincoln.

7 thoughts on “Passing the torch”