Writers find inspiration in other writers. As Vita Brevis celebrates its fifth anniversary, I have been inspired by rereading the scope, depth, and variety of the blog’s posts. These essays have also nudged me out of my comfort zone – to share what I hope to accomplish in my leap into the unknown: in this instance, the mysteries of autosomal DNA.

Sometimes our most carefully reasoned genealogical constructions crumble like a house of cards. Few other ancestral haunts have gripped me like Block Island, Rhode Island. Of all places in the Ocean State, it is the most remote for on-site research. To give myself the maximum amount of time in the town vault, I would fly to Block Island from Westerly rather than take the ferry. I spent years combing through land evidence page by page to sort out confused family relationships. In the end, even after publishing two articles, I had to unlink every one of my eighteenth-century Block Island ancestors. Here’s why: 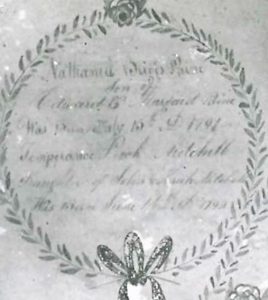 According to a hand-painted family register created in 1848, Nathaniel Briggs Paine was born on Block Island on 14 July 1791, the son of Edward Paine. Family fiction: Edward, a Revolutionary War soldier died in 1785, having fathered only one daughter, Nancy Welsh Paine. No amount of wishful thinking could fill in that gap.[1]

As Nathaniel’s mother, née Margaret “Peggy” Welsh, lived alone on an island without a husband, I am left with no other clues as to Nathaniel’s paternity other than inherited autosomal DNA. Peggy’s birth and parentage also remain elusive. Was she native-born or, as descendants speculated, from Ireland?

At 19, her son, Nathaniel, married eighteen-year-old Temperance Lock Mitchell, presumably from Block Island. The family register recorded her parents as John and Sarah Mitchell. One John Mitchell, son of Jonathan and Catherine (Rose) Mitchell, born on Block Island in 1769, was the nephew of Temperance Rose, who married Nathaniel Lock. Catherine and Temperance were sisters. This HAD to be the right family – so I persisted. Sadly, and mournfully, I had to accept there was absolutely no proof that this John Mitchell lived to adulthood. Land evidence made that clear. Finding the right John Mitchell remains a work in progress. Thus, Nathaniel and Temperance’s son Reuben Welch Paine has three open slots for his grandparents.

And so, I join the ranks of those who hope to make discoveries when the paper trail does not provide answers. My mother’s willingness to contribute her DNA sample brings me a generation closer to undiscovered ancestors. Several DNA matches that prove to be Nathaniel and Temperance’s descendants share DNA with my mother but not with me.  Mother never dreamed her saliva was so valuable! As I construct other links through matching DNA relationships, I confess to bewilderment at names and places I have never heard of before. Nonetheless, exciting possibilities beckon.