When I became Editor-in-Chief at NEHGS in June 2013, one of the new initiatives Ryan Woods and I discussed was a blog for the Society. Current and former colleagues worked with me to establish the blog’s purpose and name, and – in time – got me set up on WordPress. (Two years later, when I was on a sabbatical, three current and former colleagues managed the blog in my absence.) So Vita Brevis has been a cooperative venture from the beginning, relying on the energy and commitment of the NEHGS staff and some dedicated outside contributors to produce fresh content. 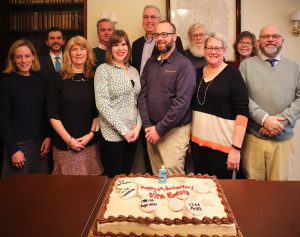 Today marked the fifth anniversary of the blog’s official launch, with a post by Robert Charles Anderson. Coincidentally, Bob has a new book out, while tomorrow will mark the blog’s 1,250th published post. (In a few days Vita Brevis posts will have been read two million times.)

Naturally, we marked all of these things with a cake. (The saga of the cake’s creation is an amazing one; kudos to Claire Vail, who had the cake made and took all of these photographs.) 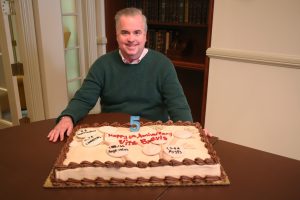 Other NEHGS staff members, many of them contributors to the blog, later joined us for cake and Prosecco in the Society’s Education Center. We have set a strong precedent for future celebrations – we shall see where we are five years from now…!