When people ask me which DNA test I recommend, I turn around and ask them some questions. If what they are after is taking is an “autosomal DNA test,” I may tell them different reasons to take a test with Ancestry or 23andme (and then usually recommend they also upload their Raw DNA onto GEDMatch, FamilyTreeDNA, and MyHeritage to connect with more matches). While I have had many examples of successful connections with the first four sites, I had not any significant breakthroughs with MyHeritage until very recently.

My wife’s grandmother Zoila (now 87), had taken a DNA test with 23andme a few years ago. We have uploaded her RawDNA onto all of the sites above (except Ancestry, since they currently do not have that option – I’d need to get another test, and having her take the first test took a very long time!). At the time of the test, I wrote a post about an interesting match she had on 23andme with someone who was also related to her late husband. I recently looked at her matches on MyHeritage. After her four known relatives whose DNA kits I also manage, her highest match was Francisco, someone unknown to us (see test results, above).

This was a very close match, predicted to be around second cousins; Francisco had an online family tree that went back several generations, but there was no immediate way I could find a connection. However, as the chart below will demonstrate, Francisco had a rather large amount of “recent endogamy” – cousins marrying and having children with other cousins. One set of his great-great-great-grandparents – Juan Gonzalez and Francisca Tejada – were his ancestors in four distinct ways; another set – Bernardo Pantaleon and Maria Tejada – were his ancestors in five distinct ways. To further complicate the kinships, Maria Tejada was a niece of both Juan Gonzalez (her mother’s brother) and Francisca Tejada (her father’s sister). While I was reasonably sure Zoila and Francisco were not second cousins, if they were related through these families that Francisco descended from multiple times, that connection would more than account for the closer DNA match.

The common surnames in their trees were Tejada and Gonzalez. Zoila’s maternal grandmother, Clemencia Tejada, was the daughter of Blas Tejada and Carlota Faña of Las Vega, Dominican Republic. Zoila’s father’s maternal grandparents were Nicolas Hidalgo and Felisita Gonzalez, who married in San Francisco de Macoris in 1822 (no parents were listed on this record). I had no ancestors behind Blas Tejada or Felisita Gonzalez but, now aware of this significant DNA match, set out to do more research.

I remembered that in tracing Zoila’s late husband’s ancestry, I had identified some of his ancestors in the 1812 census of San Francisco de Macoris. This was a document I could have looked at before; I knew of its existence, but had never thought to review it. This census was taken just ten years before Nicolas and Felisita married. Sure enough, I found both of them there in the same neighborhood (but not right next to each other) of Arroyo Caña:

Nicolas’s parents were Tomas Hidaglo and Petrona Tejeda [sic] and Felisita’s parents were Juan Gonzalez and Francisca Tejada – the couple above that are Francisco’s ancestors in four distinct ways. From this parent identification alone, this chart below demonstrates fourteen ways that Zoila and Francisco are cousins: 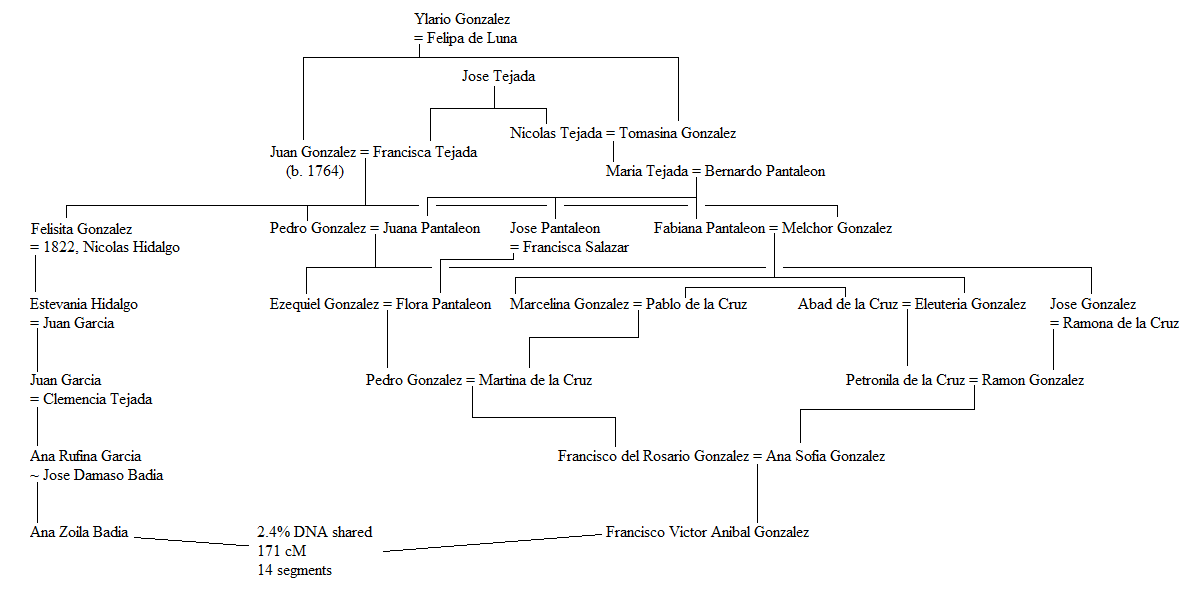 I still have not found a way two of Zoila’s Tejada ancestors tie in (Blas Tejada above, and this newfound ancestor Petrona Tejada, Nicolas Hidalgo’s mother), but Francisco has connected me with another cousin who is aiding in this research. Thanks to this DNA connection, I identified nine new ancestors of my wife from records I had already seen before, and records that this distant cousin had researched himself. Not bad for my first “fruitful” connection through MyHeritageDNA!

4 thoughts on “A family thicket”