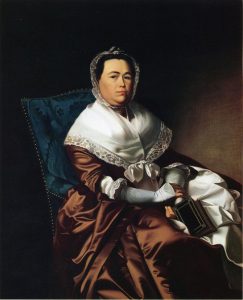 At the end of October, I shared the exciting experience of touring the Gov. Bellingham-Cary House, where my distant cousin – the Rev. Thomas Cary (1745–1808) – spent time as a young adult. I mentioned near the end that I’d found something curious at New York’s Metropolitan Museum of Art vaguely related to his family, and now it’s time for the “reveal.”

While I don’t know what Thomas’s father or mother looked like, his mother’s sister, Katherine (Graves) Russell of Charlestown, Massachusetts, was painted by John Singleton Copley around 1770. The portrait, at left, is in the collection of the North Carolina Museum of Art. 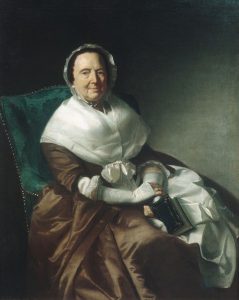 Two days after leaving Boston, I spent all day at the Met with my husband and older son. We were among the very first to see their exhibit of Armenian art, and also saw a ton of armor, ancient Egyptian art, and early American paintings and furniture. Imagine my utter astonishment when I came across this portrait of Mrs. Sylvanus Bourne, painted in 1766 by Copley.[1] Does it remind you of anything?

I was stunned, and literally stopped in my tracks! I knew that Copley often painted his subjects in dresses copied from other artists’ work (especially for his American customers who wished to be painted in fancier English fashions than they personally owned), but I didn’t know that he used the exact same pose for multiple sitters. It’s hard for me not to feel that one of these ladies got ripped off, and I think it was Thomas Cary’s aunt.[2] 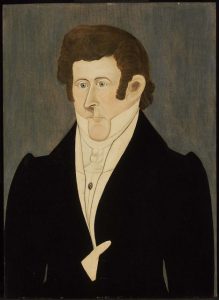 On the other hand, each lady had a much better portrait than a gentleman known as “Mr. Tiffen of East Kingston, New Hampshire,”[3] who was painted around 1820 by an artist known only as A. Ellis. When my husband saw this painting at Boston’s Museum of Fine Arts (where the Rev. Thomas Cary’s own Copley portrait hangs), he laughed out loud and said that the sitter must surely have demanded of the artist: “Hey, Mr. Ellis, I want my money back!”

[1] According to the portrait’s description, Mercy (Gorham) Bourne was born in 1695 and died in 1782, and sat for this painting three years after her husband’s death. The couple lived in the village of Barnstable, on Cape Cod, and had eleven children.

[2] To my eye, the nail heads on the chair look more differentiated in the portrait of Mercy Bourne; those in the picture of Katherine Russell are simple dots repeated at regular intervals. “Lazy painter!” was the comment of a friend who majored in art history.

[3] The museum’s website [www.mfa.org] states that it’s uncertain whether the name long attached to this painting is accurate, since no one bearing the name Tiffen appears in the census for East Kingston during the corresponding period.

6 thoughts on “The dress is all”