As we begin the countdown for 2019 – and look forward to the blog’s fifth anniversary in January – I have selected some posts from the first half of 2018 to showcase the range of subjects covered in Vita Brevis during the last year.

Alicia Crane Williams started the year with a series of posts on establishing criteria for what constitutes an “excellent” genealogy, as distinguished from a “good” (or a “poor”) one:

A “scoring” system for genealogies would be interesting. If, for example, we had ten categories on which to judge a genealogical source, and each category had a potential ten points maximum, the “perfect” score would be 100. Of course, this would all be subjective, but it would give us a way to group works for comparison (top 10%, bottom 50% etc.).

Her list of criteria includes “Age and Methodology”: “When was the work compiled? What was the prevailing genealogical methodology of that time? Would the author have had access to records or family information not available to us now? Does the work state information for generations long before the author’s birth without giving sources?”

In all, the series covers Who’s who, Citations, Completeness and restraint (in two parts), Format, Scope, Age and Methodology, Peer Review, Analysis, and Accessibility. 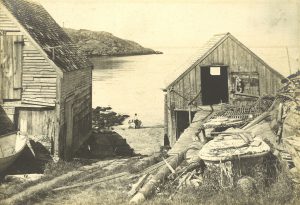 Sharon Inglis elicited a lively correspondence from readers with her article on a mysterious set of photographs, evidently of the Maine coastline, that had belonged to someone in her husband’s family:

In one of Scott’s boxes, we found seventeen pages of photos taken probably about 1900 and pasted into a little album. The contents of the various boxes has been mixed up over the years, so we aren’t sure to which family the person who owned or took the photos belonged. The images depict what seem to be everyday scenes in a turn-of-the-century coastal (perhaps island?) community. By sharing them here, I hope you will enjoy them and that someone may be able to help identify where they were taken.

Go ahead and read the article to learn more about the results! 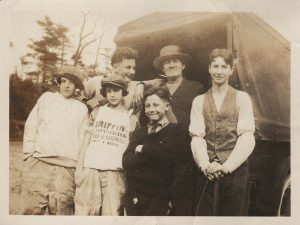 Decades ago, Michael Dwyer had photo questions of his own: How could he find and identify images of his maternal grandparents? He embarked on a search, reaching out to his grandparents’ friends and painstakingly reading through the Wareham (Mass.) city directory for 1974 to find other contemporaries.

Little did either of my grandparents realize that the photos they gave to friends would make their way back to me more than fifty years later. Even better than a boomerang returning to its owner!

Now having a sense of what Lois and Emory looked like, their faces jumped out to me from uncaptioned snapshots pasted in scrapbooks, like the one [above left] from about 1922. 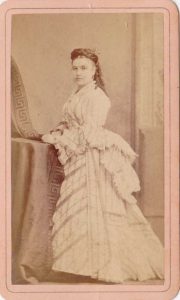 A successful search is the focus of Pamela Athearn Filbert’s article on her great-great-grandmother Maria del Refugio Susana Elizalde, previously known within Pamela’s family by the (identity obscuring) name of her first husband as Susan Goodrich.

Discovering my great-great-grandmother’s identity substantially changed my own. Through her I am a ninth-generation Californian, and heir to a culture very different from the British, German, and Scots-Irish ones I grew up knowing about. When I visited Susana’s unmarked grave eighteen months later, I’d planned to bring flowers but couldn’t find any for sale. Then I noticed two ladies putting red roses on a nearby grave. With tears in my eyes, I asked if they would share a rose for the grave of my long-lost great-great-grandmother. It turned out to be the perfect tribute to a woman whose name and identity had been obscured for more than a century: “A rose by any other name would smell as sweet.” 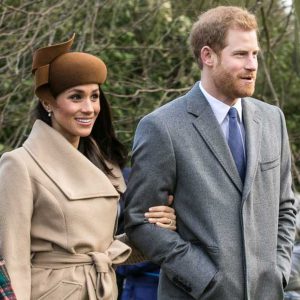 The day before the royal wedding in May, Chris Child considered the maternal ancestry of (Rachel) Meghan Markle, now HRH The Duchess of Sussex:

With Mother’s Day last Sunday and the wedding tomorrow of Miss Meghan Markle and Prince Harry of Wales, I thought I would write a post on some of her maternal ancestors. Often on Mother’s Day, genealogists consider their matrilineal ancestry as a way to honor their female ancestors. 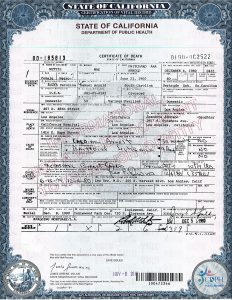 He has since followed that article up with a recent post on his successful search for death certificates for the Duchess’s grandmother and great-grandmother:

The other California death certificate I ordered was for Jeanette’s mother (and Meghan’s great-grandmother) Nettie Mae Pritchard. According to the California Death Index, Nettie died in Los Angeles County on 4 December 1980. However, according to the “certificate of search” I received … from the Los Angeles County Registrar-Recorder/County Clerk, no such name appears in their indexes. 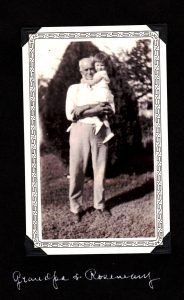 Finally, in June Jeff Record went looking for a cousin – or, rather, for the identity of a child held in her grandfather’s arms. But who was Rosemary? And who was Grandpa?

Rosemary’s picture had arrived en masse with a lot of other old photographs, forwarded for safekeeping, and sent with kindness from the family of my biological great-grandmother, Opal Young. Most of these old pictures had belonged to Opal’s older sister, Mary, with some of these pictures inherited by Mary’s daughter Maxine. And like most old pictures they had been labeled as Mary Young and her daughter Maxine had preferred – for themselves, and for their own easy identification.

So how did Jeff set about identifying this mysterious pair? Read on!