African Founders , a recent publication by David Hackett Fischer, discusses Anthony Jansen van Salee (1607-1676), known as the “Black Mohammedan.” His mother was of African origin, and his father was Jan Jansen van Haarlem, known as Reis Mourad the Younger, a highly successful Dutch pirate in Algeria and Morocco. Anthony and his brother or half-brother, Abram Jansen van Salee (d. 1659), were early settlers in New Amsterdam, now New York City. Their surname “Van Salee” refers to their origin in the Republic of Salé in modern Morocco. Anthony had considerable landholdings in Manhattan and later, after some disputes with other Dutch settlers, in Brooklyn near Coney Island. Abram lived in Brooklyn as well. Anthony’s descendants largely married into other Dutch families of the area, while Abram’s descendants largely married other people of African descent.

Abram’s descendants are treated through the 20th century in a three-part article by Register editor Henry B. Hoff, published in 1990 in the New York Genealogical and Biographical Record, titled “Frans Abramse Van Salee and His Descendants, a Colonial Black Family in New York and New Jersey.” The last section refers to several descendants of Abram Van Saleee through his great-great-great-granddaughter Maria (Van Salee) De Grasse: “her sons and sons-in-law included a minister, a doctor purported to be the first black member of a U.S. medical society, two Civil War veterans (one in the 54th Massachusetts Volunteers, the subject of the [then] recent movie Glory), and a wealthy Newport hotel owner and civil rights activist.”

However, descendants of Anthony Van Salee have been mentioned in several works without specific lines of descent. Fischer’s work African Founders states: “Among their descendants were a progeny of Vanderbilts, Whitneys, Frelinghuysens, two Dukes of Marlborough, President Warren Harding, Humphrey Bogart, and Jaqueline Bouvier Kennedy. Mrs. Kennedy told New York genealogists that she had known about a line of descent from Anthony van Salee, but had been informed that he was a Jewish gentleman. The genealogists did not pursue the subject.”

A 1972 article by Hazel Van Dyke Roberts titled “Anthony Jansen Van Salee 1607-1676,” also in the New York Genealogical and Biographical Record, provides genealogical detail on Anthony, his wife Grietje Reyniers, their four daughters, and their husbands. It also asserts an even more cryptic list of descendants: “Among [Anthony and Grietje’s] descendants were one and possibly two governors, an Episcopal Bishop, a Rector, a United States Senator, who was for a time acting Vice-President of the United States, and whose son was in the House of the Representatives at the same time.”

Of course, I wanted to find out how many of these individuals were Van Salee descendants with their specific lines of descent. Hazel Van Dyke Robert’s list of descendants is a bit too cryptic to know who she is referring to, but I believe the “acting Vice-President” refers to Samuel Lewis Southard (1787-1842), a U.S. Senator from New Jersey, and President pro tempore of the Senate from 11 March 1841 to 31 May 1842. When William Henry Harrison died on 4 April 1841, Vice-President John Tyler assumed the presidency, and the office of Vice-President was left vacant until the following election. As President pro tempore of the Senate, Southard would have presided over the Senate and was referred to as “ Acting Vice President.” (This practice stopped after the Presidential Succession Act of 1886.) However, none of Southard’s sons were Representatives in 1841—although his father Henry Southard had been a U.S. representative from New Jersey from 1801-1811 and 1815-1821, as well as his brother Isaac Southard from 1831-1833. Samuel Lewis Southard also served as Governor of New Jersey and U.S. Secretary of the Navy.

Now to examine the descendants of Anthony Van Salee as claimed in African Founders. The ancestor table of Warren G. Harding in Ancestors of American Presidents takes Harding’s ancestry back to Anthony’s daughter Sarah Antonise Jansen and her husband John Emmons. The path to the Vanderbilts (and by extension the Whitneys and Dukes of Marlborough) is nicely summarized in an article in our former magazine NEXUS by Scott C. Steward and Richard Evans: “ Family Connections of Cornelius Vanderbilt (II) and Alice Gwynne Vanderbilt.” The Frelinghuysen connection arrives early, as Anthony’s great-granddaughter Eva Terhune married the German immigrant to New Jersey, Rev. Theodorus Jacobus Frelinghysen (ca. 1691-ca. 1747).

However, the claims of descent from Humphrey Bogart and Jackie Kennedy appear flawed. A fairly detailed ancestor table for Bogart appears on the Rich Hall’s website FamousKin, and while the actor certainly has many ancestors in New Amsterdam, no Van Salee descent is evident. Bogart’s ancestors Joris Jansen Ralaljie and Catalyntje Trico are mentioned in the 1659 probate of Abram Van Salee, but as executor and witness, not relatives.

Jackie Kennedy’s claim is even more strange, as she appears to have hardly any colonial ancestors in New Amsterdam. A detailed ancestor table appears in the Autumn 2016 issue of Executive Papers (journal of the Hereditary Order of the Families of the Presidents and First Ladies of America). Of Jackie’s ancestors in the fifth generation born between 1794 and 1821, one is born in France, one in Philadelphia, two in Maryland, four in England, and four in Ireland. One of her three American-born ancestors, Philadelphia-born ancestress Louise Catherine (Vernou) Bouvier, is also the daughter of a French-born father. The only ancestry taken to the 17th century in the ancestor table is through her Maryland forebears. There is one ancestor, Dr. Jacob Sanderse Glenn (1686-1746), who was born in Schenectady, New York and later moved to Delaware and ultimately Maryland, where he married and left descendants. The New York connection for this ancestor was only recently discovered by Alexander Bannerman, the editor of this journal, and while it does provide Jackie Kennedy with a descent from King Robert III of Scotland, there is no connection to the Van Salee family. Dr. Glenn’s father’s parents were from Scotland, while his mother, who was baptized in New Amsterdam in 1651, was of Dutch and Walloon descent.

So, where did the claim about Bogart and Kennedy come from? African Founders cites a page on WikiTree which no longer asserts that they are Van Salee descendants, but an archived version of the page from 2016 does, as well as other connected pages on the same website. These pages cite a PBS Frontline page by Mario de Valdes y Cocom on the Van Salee family as their source. I immediately saw a red flag in the summary of Jackie Kennedy Onassis’ Van Salee descent:

“Either Professor Hershkowitz, or Tim Beard, former head of the Genealogical Department of the New York Public Library related this incident regarding van Salee genealogy. At the time the Kennedy administration began implementing its civil rights agenda, the New York Genealogical and Historical Society approached Mrs. Kennedy hoping to discuss the opportunity her African ancestry, through the Van Salees, could have in possibly assisting her husband to realize his social goals regarding race relations. Mrs. Kennedy insisted on referring to the van Salees as ‘Jewish,’ and the New York Genealogical Society did not push the subject further.”1

As this article is not even clear on which of these two (now deceased) men related this incident, and without any clear way for this descent to even be possible, I believe that this entire story has dubious credibility. As shown on my chart below, the 11th Duke of Marlborough married his second wife Athina Onassis in 1961, herself the former wife of Aristotle Onassis, who married Jackie Kennedy in 1968. This is a tangential connection at best, and would not have even existed at the time when Jackie was First Lady. If anyone has any plausible theories for how Jackie Kennedy or Humphrey Bogart could be Van Salee descendants, I would love to hear about them.

The chart below shows the several selected Van Salee descendants that can be proven:2 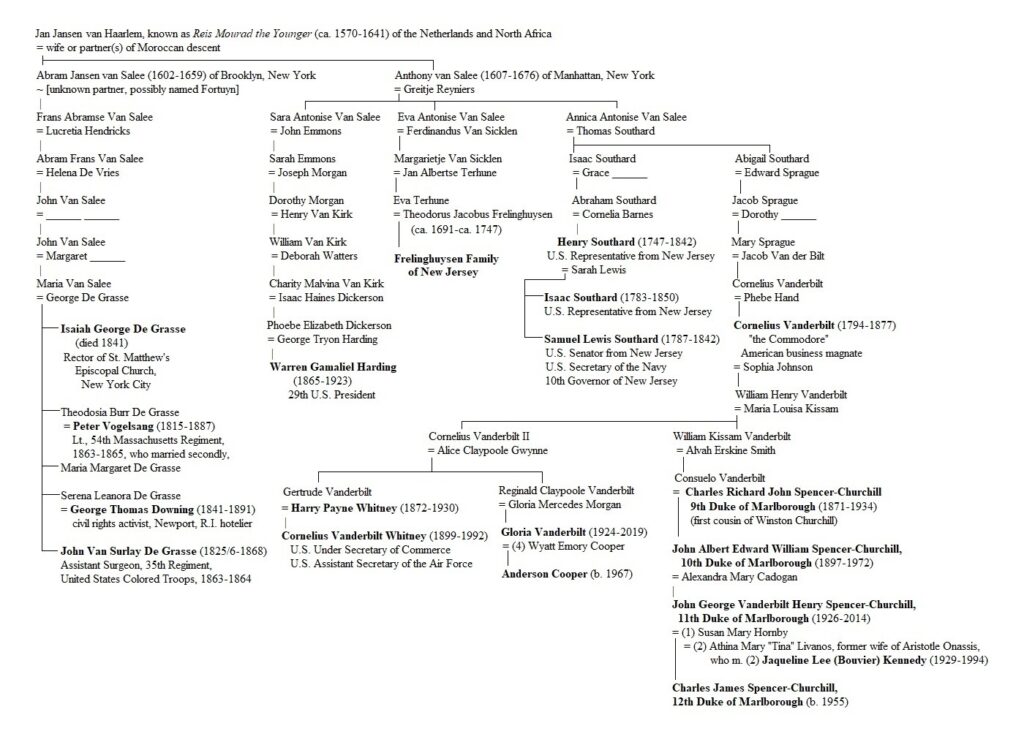 1 Leo Hershkowitz (1924-2017) authored an article on Anthony Van Salee in New York History, October 1965, Vol. 46, No. 4 (October 1965), pp. 299-310, entitled “The Troublesome Turk: An Illustration of Judicial Process in New Amsterdam,” available on JSTOR. No mention of later Van Salee descendants are stated in this article.