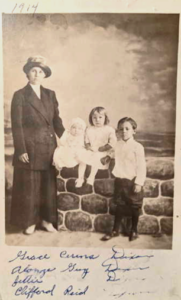 Sometimes it starts with that picture in the attic. It falls out of its black corners and yellow cellophane as if to say, look at me, I’m here for a reason—challenging you to rediscover its past, to make the voice of its subject heard.

I think it must have happened this way for my sister, as she explored the small attic of our mother’s house a few months ago. Here among the musty bric-a-brac and old pictures, a single photograph shook itself free. Mrs. Grace Dixon: a woman none of us in the family had laid eyes on before, waiting buried deep within our archives for one of us to uncover her story.

Sis called me right away, and indeed, I was impressed with her find. I’d first heard of Mrs. Grace Dixon1 years ago, not through any family member, but rather via a brief biographical sketch in Phillip Judd and his descendants.2 At that time, I’d attempted to explore some of the facets of Grace’s life, and I admit that I’d given into genealogy’s worst enemy: assumption. Seeing her there in that old photo with her children, I winced at some of my previous speculations. My sister’s discovery became my opportunity to revisit Grace, and reevaluate what I thought I knew.

Grace Cerina Reid, aka Mrs. Grace C. Dixon, was born in Los Angeles during the last decade of the nineteenth century. Married at age fifteen, she was a mother of four children and abandoned by her husband by the time she was twenty-three. My grandmother Alta Sage (then Mrs. Alta Lee) married Grace’s son Clifford as her second husband, doing so twice, and well, the rest is history . As I have written before, growing up there was never any mention of Clifford’s parents – and certainly no mention of Grace. Indeed, any memories about Grace passed away with her son Clifford, nearly forty years ago.

It was about then that my somewhat-clairvoyant sister told me to “recheck the census” for Grace. I explained that I’d already found Grace living with her kids in Los Angeles in 1930, and had never found any trace of her after 1934. But being an obliging brother, I went back to the 1930 census to see what I could find. And what do you know? There, at the very bottom of the page listing people of the same household was a name I’d missed: “Leroy Horry, a cousin.” I hadn’t paid any attention to this stray cousin before, but as it turned out, he was the key to unlocking Grace’s mystery.

I quickly was able to locate a Leroy Robert Horry with birth and death dates in Boulder, Colorado. I even found a FindAGrave.com memorial containing a brief bio, saying that he’d lived in Los Angeles for a few years before marrying his wife—identified as Grace C. Dixon. 3 A somewhat vague Utah marriage index confirmed the union.

Records show that Grace Horry died in 1939, and that she is buried in Boulder without a headstone next to her husband Leroy. If this was the same Grace Dixon, it would explain why I never found record of her after 1940. I realized that I needed to get my hands on a death certificate for Mrs. Grace Horry, to see who were named as her parents and if that matched the meager information I had on Grace so far.

The thought of getting a death certificate out of Colorado was daunting, as the state is known for keeping close guard of its vital records. But then I realized: maybe the actual marriage record would help. I sent off a quick email to the San Juan County, Utah, Recorder’s Office, figuring I’d get the standard robotic answer: “Fill out this form and send your check here.” But that didn’t happen. Through the kindness of someone at a Utah county clerk’s office, a marriage record arrived in my inbox without any further ado. 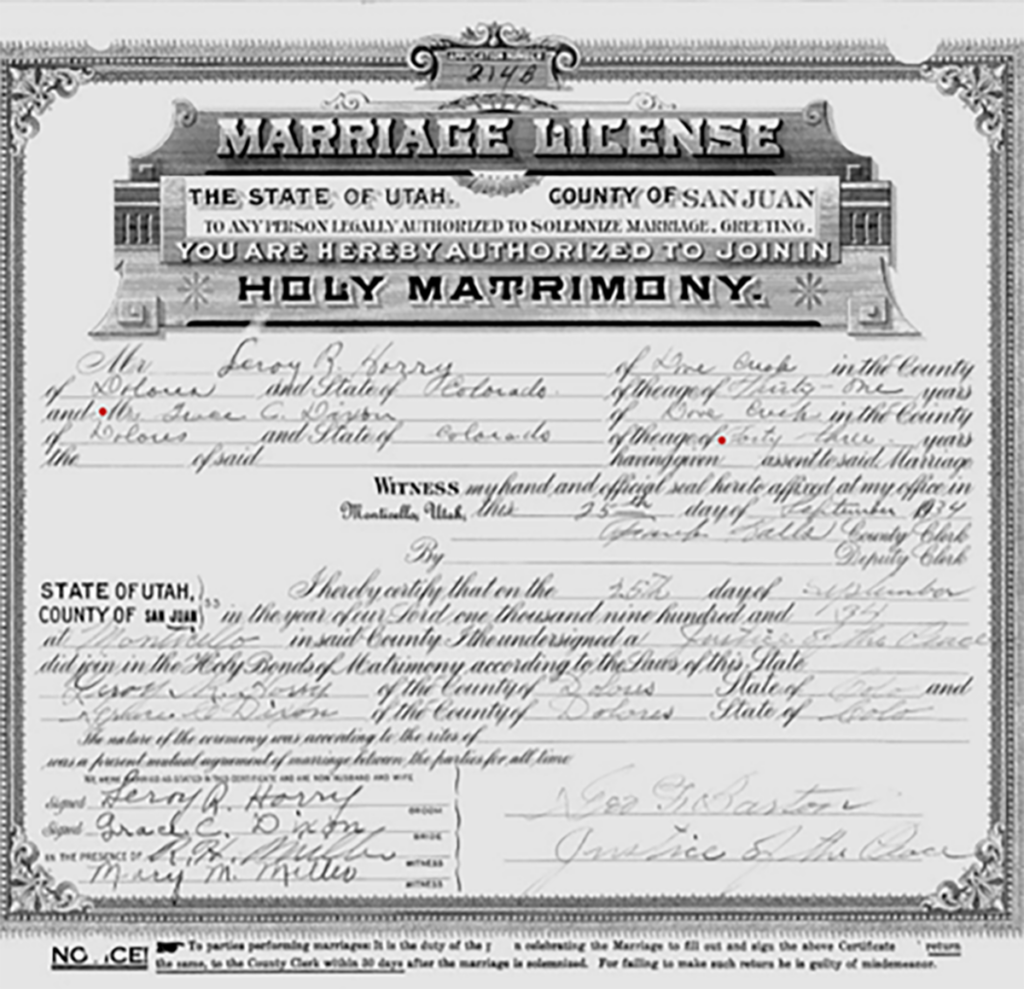 While the document isn’t definitive, it’s at least pretty telling. Mrs. Grace C. Dixon of Utah lists her age as 43 on this certificate, the exact same age “my” Grace would have been in September of 1934. At this point, it very much looks to me like Grace ran off to Utah and married her younger cousin. I can understand how why nobody ever talked about Grace in later years, and why the only picture anyone has ever seen of her is over one hundred years old, left forgotten in an attic for much of that time. 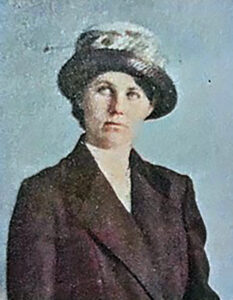 I believe that in genealogy, it’s especially important not to be judgmental about the people who have gone before us. I know this is easier said than done. Right now, I’m just trying hard to fill in the true story about Grace without putting too much spin on her choices: a girl who was married at age fifteen, an abandoned mother raising four children. She was a woman who must have endured much, only to die by age forty-eight. Some will say that people like Grace are “survivors,” but perhaps it is better to say that Grace endured. I believe that she took one last grab for happiness when her cousin, perhaps a lonely guy himself, offered her a dream of a better life together.

Grace and Leroy were only married a few short years before she passed away. I’ve wondered if she was sick, or if alcoholism played a role, but that’s merely speculation on my part. I admit too that I’ve never explored just how closely related Leroy and Grace were—part of me doesn’t quite want to know. I would like to say that during the next thirty-five years, Leroy Robert Horry never remarried. He stayed in Colorado until his death in 1974, at which time he was placed next to the apparent love of his life, a woman once called Mrs. Grace C. Dixon . She lies there now, oddly without any gravestone, and only her smile from a once-lost photograph is left to tell her tale.