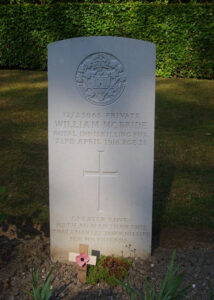 Have you ever wondered if a favorite song of yours had a basis in fact?

In the song “The Green Fields of France,” the narrator reflects upon the grave of Willie McBride, a young man who died as a soldier in World War I. In one verse, he asks Willie:

Or are you a stranger without even a name
Forever enshrined behind some old glass pane
In an old photograph torn, tattered, and stained
And faded to yellow in a brown leather frame?

As family historians, we hate to leave photos of relatives unidentified. The more that I have played the song, the more I have wondered if there was a real Willie McBride—and I finally decided to do something about it.

I confess that I only discovered this song long after it was written, when I started listening to the Dropkick Murphys in about 2008. It was originally titled “No Man’s Land,” written in 1976 by the Scottish-born Australian folk singer Eric Bogle. Many other anti-war folk songs were written in the 1960s and ‘70s, such as “Where Have All the Flowers Gone”(1961), “Blowin’ in the Wind” (1963), “One Tin Soldier” (1969), and “Billy Don’t Be a Hero” (1974). I remember singing some of them as a child during school Memorial Day programs. Like those songs, “The Green Fields of France” has a tender and sad story. 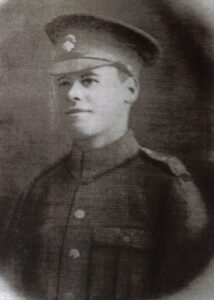 The real Willie McBride can be found buried in Authuille Military Cemetery , in the Somme region of France. County Armagh historian Trevor Geary researched Willie’s life, but found a discrepancy—he was 21, not “only 19” as stated in the song. However, Geary verified with the song’s writer, Bogle, that the William McBride who was a member of the Royal Inniskilling Fusiliers, and who died 22 April 1916, was indeed the man he wrote about.

Willie McBride was the son of Joseph and Nicholina “Lina” (McBride) McBride, born 23 September 1895 at Rathcarbry, Co. Armagh, Ireland (now Northern Ireland).1 His parents were married 22 March 1888 at the Parish of Keady.2 Joseph, a farmer, was the son of George McBride, and Lina was the daughter of Thomas McBride—both of whom were also farmers.

I noticed that, as is traditional in Irish naming conventions, the oldest two sons carried the names of first the father’s father, and second the mother’s father.

I made one final search in the Valuation Revision Books of Northern Ireland (available on PRONI) , in which George McBride was found residing in Racarbry <sic> from 1882 to 1896.4 George was occupying land leased by William Gardiner, consisting of a house, office, and land. There was no strikeout of his name, which indicates that he was still living there in 1896. 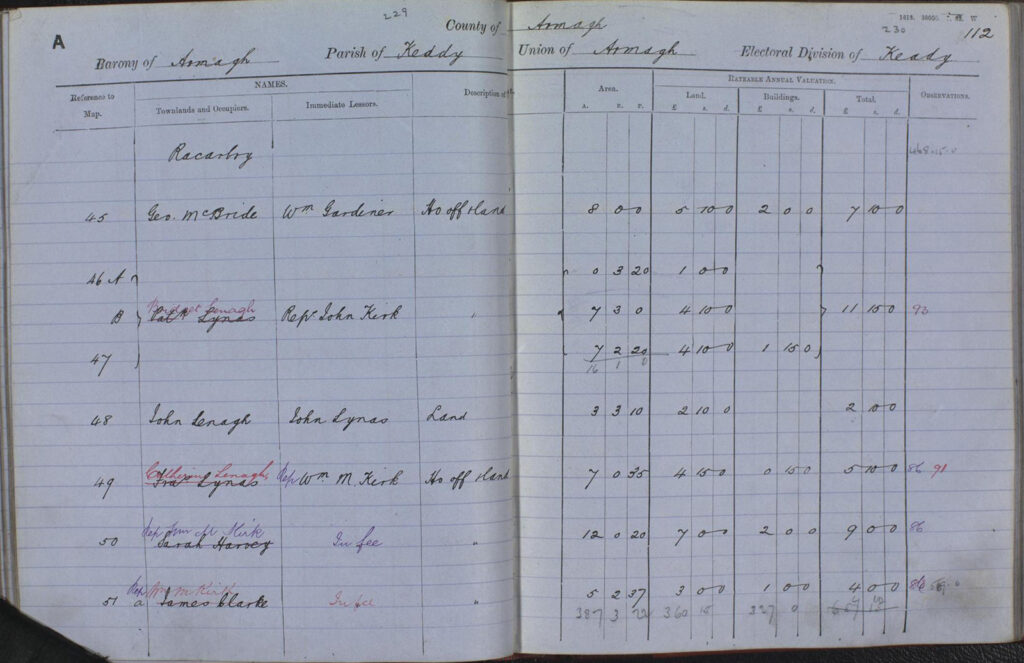 “The Green Fields of France” strikes many chords within me, particularly as a genealogist. Researching the story of Willie McBride gave me an excuse to explore records which my own family research has not afforded—and helped me put a face to the name of a young man whose tragic story still resonates over a century after his death.

16 thoughts on “The True Story of Young Willie McBride”