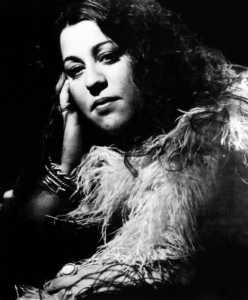 Even the smallest bit of nostalgia can set me off down a new genealogical rabbit hole. The other day, when I heard Cass Elliot singing Make Your Own Kind of Music1 in a car commercial on television, I knew right away that I was in trouble. Wouldn’t it be incredible to discover a genealogical connection with that legendary 1960s chanteuse? Okay—maybe it wouldn’t be for you, but for this aging flower-child, the thought of it was uber-cool. Curiosity piqued, I decided it was time to dig deeper.

Almost immediately, I saw that Cass Elliot, born Ellen Naomi Cohen in 1941, was Jewish by way of both her parents.2 Let’s face it—unless I’m ever able to find a 14th-century synagogue on the Orkney Islands , I have little chance of finding any similar lines here. This was disappointing, but I figured there had to be more to the story. I began to wonder who Cass had married, and if she had any children to whom I could establish a connection.

Unverified sources allude that Cass Elliot was married twice3 —but her only child, a girl named Owen, was not the daughter of either husband. Because Cass died when Owen was a little girl, it is said that Owen did not learn the identity of her biological father until many years later:4 a man named Charles Wayne Day, also known as Chuck, or Bing Day.5 Well, I had plenty of Days in my family tree, so this was a good start. I began building a tree for Mr. Bing Day, and was even more pleased to discover that his paternal grandmother was Mary (Judd) Day, a lady with strong indications of New England ancestry.6 Vainly, I figured I could drum up some proof if I could get Bing Day’s ancestors within a stone’s throw of Anthony Day7 or Thomas Judd. 8 I know, it all seems a little far-fetched—remember, I started the search on a whim, after hearing a car company’s new jingle. All I could think was that proof would come later.

I spent some time unceremoniously chasing the Days and Judds in Bing’s family from Vermillion County, Indiana to Vermillion County, Illinois, and further to Vermillion, South Dakota—I kid you not. But then my digging led me to an anomaly: while the trees I’d looked at previously had shown Bing Day’s parents as Paul Noah Day and Mary Ruth (Vandal) Day9, I stumbled upon one which listed his mother as a woman named Frances Jane Jeffrey10, and didn’t list a father at all. Then I noticed the first name of this particular tree’s owner: Owen.

Yes, it seemed I had found the public family tree actually belonging to the daughter of Cass Elliot—or at least someone using her name. Tired of looking at Days and Judds, I was grateful for the course correction. The missing identity of Bing’s father pointed to the possibility that he had been adopted, and that the other trees had listed his adopted parents as his only parents. It seemed bittersweet that a woman who only learned of her biological father late in life, should have one whose own patrilineage is unknown.

So, not all the leaves are brown11 here. I found Frances Jane Jeffrey’s ancestry to be an eclectic mix of mostly Scottish and southern U.S. roots, and was lucky to uncover a single New England line. It’s an ancestry that connects Cass Elliot’s daughter all the way back to Daniel Boone and even President Lincoln.12 I’m going to have to dig a lot more remotely to connect my own lineage with hers, including some “wonky” lines we could possibly have in common.13

Like music, genealogy helps me balance the craziness of today’s world. Chasing down rabbit holes like this one is a good excuse to work on my skills as a researcher, and it brings me closer to both my past and my present. Even if I didn’t uncover any solid connections, I got to take a closer look at the life of a great songstress, and I found the type of connection that I think we all seek—a connection to one another. Maybe it’s only about the uncertainty of a genealogical possibility, but hey, that’s quite a lot to get out of a car commercial. Sometimes, you just gotta go where you wanna go.14

1 Make Your Own Kind of Music, a song written by Barry Mann and Cynthia Weil and sung by Cass Elliot in 1969.

4 Per: https://nexttribe.com/cass-elliots-daughter/ Owen’s father was revealed to her as Chuck “Bing” Day (1942-2008) by Cass Elliot’s fellow band members on her nineteenth birthday.

11 All the leaves are Brown , a song written by John Phillips and Michelle (Gilliam) Phillips, 1965.

12 Ella Hazel Atterbury Spraker , Jesse Procter Crump , The Boone family : a genealogical history of the descendants of George and Mary Boone, who came to America in 1717 : containing many unpublished bits of early Kentucky history : also a biographical sketch of Daniel Boone, the pioneer, by one of his descendants, Tuttle Co. , Rutland, Vt., 1922.

13 These possible “lines in common” are still to be determined…

14 Go Where You Wanna Go , a 1965 song written by John Phillips. It was originally recorded by the Mamas & the Papas.

9 thoughts on “California Dreamin’: Looking for Connections to Cass Elliot”