The myths and stories in any family history are tenuous things. Often self-serving, they mesmerize us—trapping us in visions of the past filtered through glossy hindsight and half-baked truths. The tales in my own family’s history are certainly no exception. However, even these spurious and specious tales may be lost and forgotten, ravaged by time, and become yet another casualty of Alzheimer’s Disease, dementia, or memory loss. I believe that “true or not,” we as family historians are obligated to protect, explore, and secure these stories. It’s what makes our pursuit somehow different from more academic fields: the preservation of the personal.

My step-mother was the source of many family tales of dubious origin, particularly when she was suffering through the early pains of dementia. Her best story will always be the one about her evening with Elvis Presley, and how that famous crooner sang a song for her one night. In light of the cruelties of her dementia (and my skepticism of her other tall tales), I wondered—how I could ever possibly know if it was true? Was there any way to trace back her shadowy tale of Elvis to see if what she said might ever have happened?

The story went like this: my stepmother claimed that her second husband’s mother, a woman named Opal Russ, was connected to Elvis. Opal may have known or worked with Elvis’s mother, Gladys, at some point in their lives, though my step-mother was never clear on the details. She was married to that husband between 1963 and 1971, and lived with him in Los Angeles. Apparently during that period, Elvis decided to either rent or purchase a house in LA, and contacted Opal Russ to “help make the house ready” for him. After moving in, he invited “them” up to the house for an evening, during which he played the piano and serenaded my step-mother with the song Moon River.

Now I don’t doubt that like any of of us, my stepmother was capable of telling a good fib. But please keep in mind that at the time my step-mother told me this tale of Elvis, there was no Google, and no easy way (outside of perhaps the newspapers of the day) for her to research background for any tall tale she might want to tell. As with most legends, myths, and lore, where was the kernel of truth to start it? I had to know more.

Consider the first part of the story: that her former mother-in-law, Opal Russ, had somehow known Gladys Presley or been associated with her. I went back to basics and started with the 1950 census. While the Presley residence at 185 Winchester Ave in Memphis is well celebrated,1 I was somewhat surprised to see Opal Russ and family living not far from there at around the same time, at 446 Malvern Place. So I did what we all do these days: I looked up the distance from the Presley’s to the Russ’s on Google Maps. As you can see, they indeed did not live very far from each other. 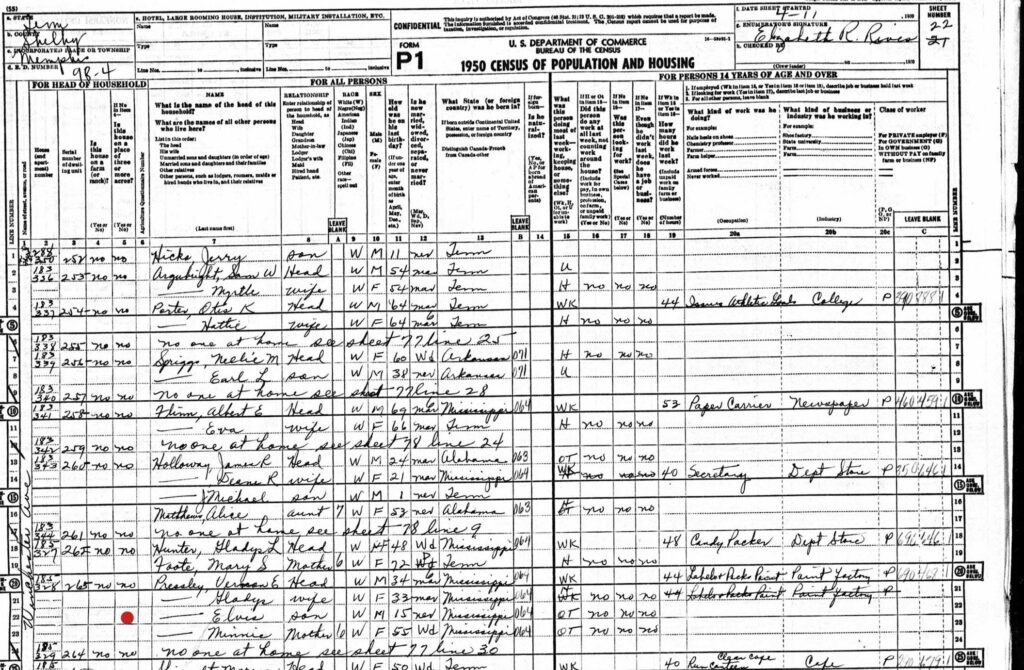 However, Memphis is a big city, and it was a big city in 1950 too. So how do I reconcile this information? Can I file it under “yes,” that 2.2 miles forms a “reasonable radius” for Gladys Presley and Opal Russ to have at the very least run into each other at a market, church, or Britling Cafeteria?2 There’s little way that my step-mother could have known of this proximity otherwise. While she might have heard in 1970 what the Presley’s address was in 1950, and also known where her second husband’s family lived in 1950, would she have bothered (or known how) to ascertain the distance between these two addresses, using her 1965 model desk lamp and a Rand McNalley map? I doubt it. And while Gladys Presley had died by 1958, I think we can still score one for Gladys Presley and Opal Russ in the category: “possible associates.”

Next, I wanted to see when Elvis Presley might have lived in the Los Angeles area between 1963 and 1971, the years of my step-mother’s second marriage. This was going to be tougher. I reasoned that the only way my stepmother could have encountered Elvis was if he had been in Los Angeles County during that time frame. To this end, I was surprised to learn that he had performed only one concert in the LA area during that time, as part of a concert tour in November of 1970.3 The previous time was in October 1957, well before my stepmother ever came to California. But surely Mr. Presley had many reasons to be in California outside of concert appearances. My field of options to verify her story was growing too big, covered in too many shadows.

So I moved on, hoping I could identify any house that might fit my stepmother’s narrative. She described the house as “up in Hollywood” or in “Beverly Hills,” but she didn’t know or didn’t remember much more. Unfortunately, this is where her tale gets really soggy. According to The California Homes of Elvis Presley,4 Mr. Presley owned or rented several homes in Los Angeles county:

My stepmother said that her mother-in-law Opal Russ was called upon to “make the house ready” for Elvis when he would “come to town,” but it’s anybody’s guess as to which house this tale might have been referring to. I have mostly ruled out the third address, as only the second rental period would fit the time frame,5 but it remains a viable choice. My personal favorite is the address on Monovale Drive. Needless to say, I can prove nothing.

Last but not least: my stepmother said that Elvis had serenaded her on a piano with his rendition of Moon River. To be honest, I felt like this was an odd choice of song. Wouldn’t he have picked one of his many other songs, like Can’t Help Falling in Love or Love Me Tender, rather than Moon River? It isn’t a song that I normally associate with Mr. Presley. The story of Opal’s connection seemed plausible, and even if the specific house remained in question, the events very much could have taken placed as described. But why would he sing Moon River?

Then I realized he likely wouldn’t have—or rather, that my step-mother could have been misremembering the title. She may have been talking about Elvis’s rendition of Blue Moon, which was one of his hits, and would be easy to mistake for Moon River in foggy retrospect.6 All stages of dementia are cruel, and the “early stages” are no exception. At the time she told us this story, her recollections were becoming increasingly shadowy and difficult to access. 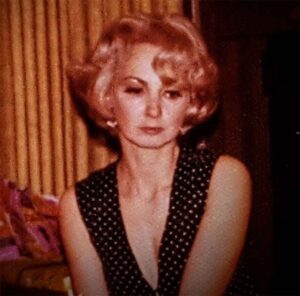 In the end, I cannot tell you for sure that my stepmother was indeed serenaded by Elvis Presley, or even that she ever laid eyes on him. Her memories are gone. I can only tell you that as with most “family legends” we were all mesmerized when she told us this tale. There are elements to her story that make it possible, but little to make it anything more than incredible. But maybe—just maybe—that’s the way family legends and stories are supposed to be. Maybe it’s the only way they can be.

In case you were wondering: I have reached out to members of my stepmother’s second husband’s family to see if the tales of Opal Russ and Gladys Presley have ever been heard by anyone else. I’d plan on writing to Priscilla or to Lisa Marie, but let’s face it—like the unanswered questions behind my step-mother’s shadowy memories, there’s a good chance those letters will only ever be marked Return to Sender.7

1 Lauderdale Courts apartments was the residence of the Presley family in 1950; information as taken from Roadtrippers.com and the U.S. Census.

2 Per Graceland.com: the Presleys moved to Memphis in 1948 and one of Gladys Presley’s jobs was at Britling Cafeteria.

5 My stepmother was married to her second husband during this second rental time period for Perugia Way.

33 thoughts on “Tracing a tall tale: was Elvis really in the building?”