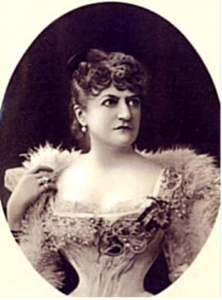 In early July I was given the opportunity to attend an online educational event, “Women in the Gilded Age,” with guest speakers Laura Thompson and Betsy Prioleau, part of the American Inspiration series at NEHGS. The draw was my interest in women’s history, and this event sparked my interest further and provided me with a newfound love of the history of the Gilded Age of New York (1870–1910), a captivating era of growth, greed, and deep cultural changes.

I became truly fascinated by one woman in particular, Miriam Leslie, known in her day as Mrs. Frank Leslie. What intrigued me about Mrs. Leslie was the way in which she challenged the societal norms of the time; in a time that expected women to be homemakers, she stepped up, challenged misogyny, and worked her way to success as a professional businesswoman, taking over the publication business of her late husband, Frank Leslie, and inspiring women who sought more than domesticity.

I knew that I wanted to learn more about Mrs. Frank Leslie, and therefore I made the most of the copious facilities that NEHGS offers and conducted further research. I discovered many things about her, from her maiden name as Miriam Florence Follin (born 5 June 1836 in New Orleans, Orleans Parish, Louisiana) to Charles R. Follin, an erstwhile cotton trader, and her mother documented as Susan Danforth; speculation remains on the latter point, with Betsy Prioleau suggesting that her birth mother was an enslaved woman.

Miriam Florence Follin married four times, sparking scandal and harboring unsavory secrets hinting at a checkered youth. She became editor of Frank Leslie’s Lady’s Magazine and later divorced her second husband, Ephraim Squier, to marry the publisher, Frank Leslie. My fascination and respect for Miriam grew even further upon discovery that following the death of Frank Leslie, in 1880, Miriam legally changed her name to Frank Leslie and took over the publication of both Frank Leslie’s Popular Monthly and Frank Leslie’s Illustrated Newspaper, succeeding against all odds. 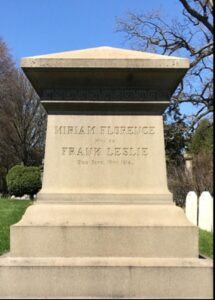 Again, she challenged societal norms and stepped up rescue her late husband’s fallen empire, at a time when women were not seen as professionals or business leaders. Frank Leslie made her persona known through her publications, influencing women and becoming a national celebrity known as the “Empress of Journalism”.

Further research led me to an article from The Detroit Times. This particular article, entitled “Should The Husband Die That The Wife May Live,” drew me in for multiple reasons. Firstly, it discussed the Titanic disaster of 1912 and incorporated the notion of feminism. Upon discussion of whether women should have been first to the lifeboats, Frank Leslie exclaims “Women should always be considered,” noting that women are “Mothers of the world” and should not be forgotten in the presence of men. To me, this demonstrates the strength and determination of Frank Leslie, as she openly voices her opinion and stands up for women and feminism worldwide. 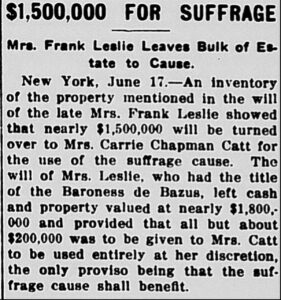 Of course, Frank Leslie was not without her faults, having led a scandalous and secretive life in the city of New York; however, my research has shown me that she was truly an unsung heroine of women’s suffrage. The life she led should not be forgotten, from her rise to professional power, defying social norms. After herdeath in 1914, when she was buried in Woodlawn Cemetery in the Bronx, she left a huge sum of nearly $2 million to Mrs. Carrie Chapman Catt, with the condition that it should benefit the suffrage cause. This donation shocked the society of New York, as Frank Leslie was deemed an unlikely suffragette; however, I believe much of her adult life paved the way for the rise of women and this large sum ultimately supercharged the passage of the Nineteenth Amendment in 1919.