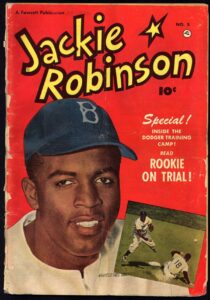 On 24 July 2022, the National Baseball Hall of Fame celebrated the induction of the newest class headlined by Boston Red Sox great David Ortiz. In honor of one of baseball’s more cherished events, we will be looking back at the family history of one of the sport’s greatest players, who broke ground and paved the way for so many who came after him, Jackie Robinson.

Jack Roosevelt Robinson was born in the small town of Cairo in Grady County, Georgia on 31 January 1919 to Jerry and Mallie (McGriff) Robinson; he was the youngest of the couple’s five children. Before Jack was eighteen months old, Jerry Robinson would leave his family, forcing Mallie and her children to relocate to Pasadena, California, where Jackie (who was recorded in census records in 1920 and 1930 as Roosevelt Robinson and in 1940 as Jack Robinson[1]) spent his childhood and formative years. After graduating from John Muir Technical High School and Pasadena Junior College, Jackie Robinson enrolled at UCLA, where he received varsity letters in four different sports (baseball, football, basketball, and track), showcasing his fantastic athletic abilities.[2] He would go on to serve in the United States military during World War II before beginning his career in baseball.

On 11 April 1947, Jackie Robinson started at first base for the Brooklyn Dodgers, becoming the first Black player in major league baseball since 1884, ending the unwritten agreement against signing and playing individuals of color in professional baseball.[3] Throughout his baseball career, Robinson would garner multiple accolades, including the Rookie of the Year award, a National League Most Valuable Player award, six All-Star game selections, and a World Series championship with the Dodgers in 1955.  Robinson would retire after the 1956 season, at the age of 37; he was voted into the Hall of Fame in his first year of eligibility, in 1962.[4]

While Jackie Robinson’s story is well-known amongst devout baseball fans and casual followers alike, his family history has been the subject of much less attention. Given that his father left his family when Jackie was only an infant, it is very unlikely that he ever met any of his father’s family members, or even knew much about them; however, a fair amount can be gleaned from available records.

Given that his father left his family when Jackie was only an infant, it is very unlikely that he ever met any of his father’s family members…

As previously noted, Jackie’s father was Jerry Robinson, who was born on 5 March 1889 in Decatur County, Georgia.[5] As shown in the map below, Jackie Robinson’s ancestors resided for several generations in a cluster of five counties in the states of Florida and Georgia. Jerry Robinson was living with his parents, who were working on the plantation of James Madison Sasser in Grady County [orange] in 1903 when he met Jackie’s mother, Mallie McGriff.[6] The couple was married in November 1909, almost certainly in Grady County.[7] The town of Ragans, where Jerry Robinson was raised and would live for much of his life, was originally part of Decatur County [red], but in 1905 was transferred to Grady County.[8]

Jerry Robinson was the son of a man named Tony Robinson (born in April 1862 in Tallahassee, Leon County, Florida [blue]) and his wife, Florence Love (born in May 1864, possibly in Leon County).[9] Tony and Florence were married c. 1883; they resided in Ragans, where they lived and worked on the Sasser plantation.[10] Tony and Florence would become the parents to seventeen children, the youngest of whom was born in 1910. While he spent his life working as a farm laborer, it seems Tony had at least some education, as he was said to have been able to read and write.[11] Tony Robinson died in Cairo, Georgia on 21 November 1932. Unfortunately, due to the difficulty in locating records for those who were enslaved, it is uncertain who Tony’s parents were, although there is some evidence to suggest potential candidates.

As for Florence Love, it is known that she was the daughter of George Love (born c. 1848 in Georgia[12]) and his wife, Clara Hadley (born c. 1848 in Georgia; she died 14 October 1926 in Cairo[13]). Clara was said to be the daughter of Louis Hadley and his wife, Louise Randal.[14] The only record for George Love that could be located was the 1880 census, which shows him working as a farm laborer in Duncanville, Thomas County, Georgia [yellow].[15]

[The] lineage of his mother is a bit more difficult to pinpoint through surviving records.

While at least one set of Jackie Robinson’s great-great-grandparents can be identified through his father’s ancestry, the lineage of his mother is a bit more difficult to pinpoint through surviving records.  What is known is that Jackie’s mother, Mallie McGriff, was born on 2 September 1889 in Georgia to Washington McGriff, a former slave, and his wife, Edna (Sims) McGriff.[16] Washington McGriff was born in Thomas County, Georgia on 10 September 1846 to Prince McGriff and a woman named Jennie.[17]  Washington and Edna were married in Quincy, Gadsden County, Florida [green], just across the border from Georgia, on 6 November 1884.[18] 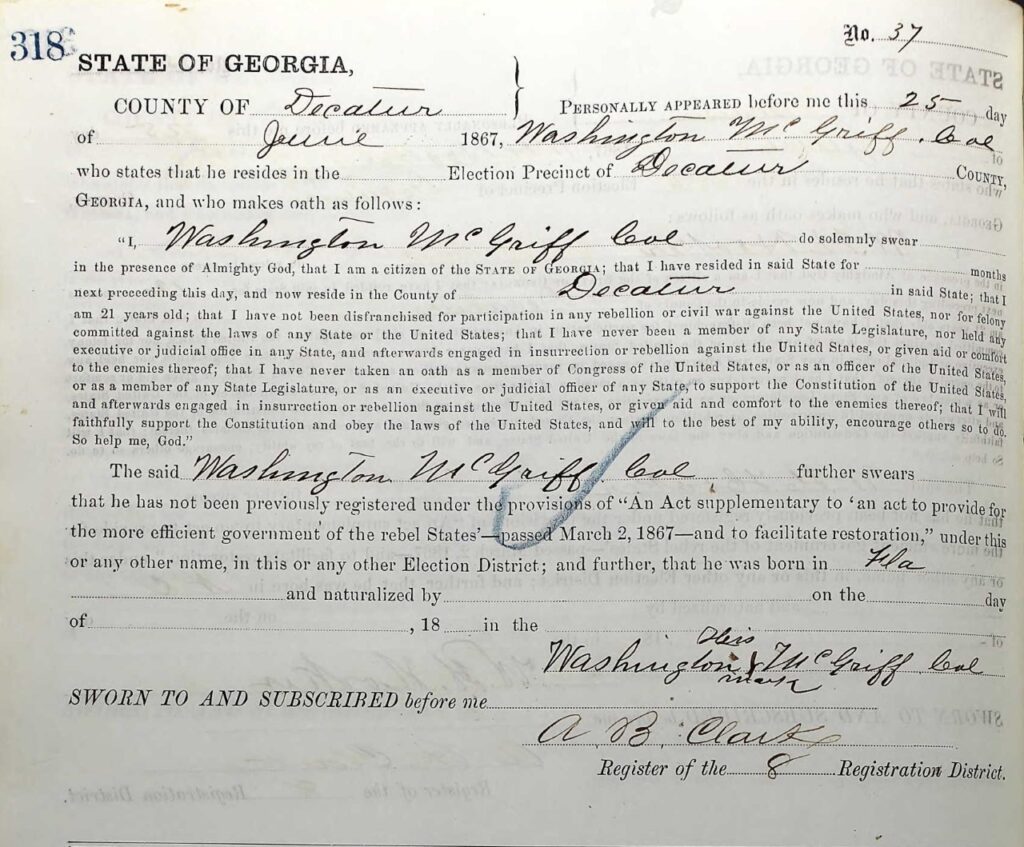 According to one biography of Jackie Robinson, Washington McGriff was a slave during his childhood and had never learned how to read. Upon hearing of her father’s desire to learn to read the Bible, at just ten years old Mallie taught her father to read.[19] In 1867, Washington McGriff signed an oath attesting to his right to vote in Decatur County, Georgia.[20] He was also recorded as having paid a poll tax in Thomas County, Georgia in 1871 and 1886.[21] Virtually nothing could be found about Washington’s parents, and while it appears that the 1900 census states his father was born in “Cayman,” it seems this may be incorrect, as all other records suggest Prince McGriff was born in Georgia.[22]

While more research will certainly be needed to continue the search for more ancestors of Jackie Robinson, the information located thus far serves as a great basis for understanding the importance of his accomplishments. Jackie’s mother, Mallie, whose father was born into slavery, lived long enough to experience her son’s entire career, one in which he broke baseball’s color barrier and made the sport he loved so much open to all.

[12] In the 1880 census, Florence is recorded as Florence Henderson, and her elder brother, Tom, and younger brother Alford also use the Henderson surname while her parents use the Love surname.  It is possible that her father was actually a man surnamed Henderson, but no record of a prior marriage was found for Clara Hadley. Household of George Love, Duncanville, Thomas Co., Georgia, 1880 United States Census, Roll: 167; Page: 264C; Enumeration District: 080, Ancestry.com.

1 thought on “Hall of Famer”