Gravestones have long served as the cornerstone of genealogical research. While the words they bear can be crucial sources of information about our ancestors, don’t forget to look at the symbols, too. Gravestone symbolism can point to information about your ancestors’ religious beliefs, group affiliations, life experiences, and more. Below are just a few noteworthy examples of common gravestone symbols and what they can reveal.

Religious symbols, like the Christian cross or the Jewish Star of David, can indicate the faith or religious affiliation of the interred individual. Within Christianity, different styles of crosses indicate different sects or national identities1:

These symbols can indicate the deceased’s religion, and therefore where best to search for church records.

Headstones, especially those carved centuries ago, deteriorate over the years, but in some cases a broken stone can be an intentional design choice. A broken column is almost 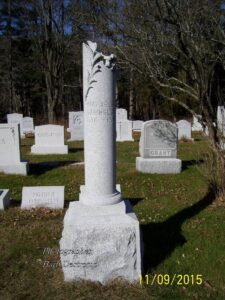 always representative of a life cut short, suggesting that the individual may have died at an early age, or before they could accomplish all of their goals in life. If you come across a broken column, it is worth considering that this person may not have lived to adulthood and may not have had any descendants, although this is not always the case. One such example can be seen on the monument to Adeline Wilhelmina Howell (pictured at top), the only daughter of Sidney S. and Adeline M. Howell, who died at the age of 18.2 Another example is the gravestone of Raffaele Gariboldi (right), who died at the age of 32 and left behind a young daughter.3

A pair of shoes carved onto a monument usually represents a sentiment similar to a broken column, more specifically associated with the loss of a young child. Most gravestones displaying a pair of shoes memorialize the death of a child under the age of one year.4

Some of the more common fraternal or sororal symbols found on gravestones include:

While these symbols may not immediately reveal details about the life of the deceased, they can certainly direct genealogical researchers to records they may not have considered before. For example, if your ancestor died in Massachusetts, and you find that they have a square and compass on their headstone, it would certainly be advisable to consult the records in “ Massachusetts: Grand Lodge of Masons Membership Cards, 1733-1990 ” which are available through AmericanAncestors.org.11

As noted above, some symbols, such as the Celtic Cross, may serve as an indication of the deceased’s ancestral homeland. Another object with a similar goal is the thistle, which is often used to signify Scottish ancestry.12

The use of hands on a gravestone may indicate a number of meanings. Many of these symbols are deeply religious, and may indicate of a certain set of beliefs held by the deceased. Often, hands represent the hand of God, and the direction they point determines the meaning. For example, a hand with a finger pointing upward represents a reward of the righteous, while a finger pointing downward is a symbol of mortality and possibly a sudden death.13 Praying hands can signify the individual’s devotion to their religion, and clasped hands may represent the reunion of a couple in death.

While the words carved on gravestones are often assumed to be the most pertinent source of information for genealogists, the symbolism attached to these stones should not be overlooked. The information contained in these symbols can uncover details you may not expect, and can prompt you to take your research in an entirely new direction.

4 thoughts on “Beyond the Letters: What We Can Learn from Gravestone Symbolism”