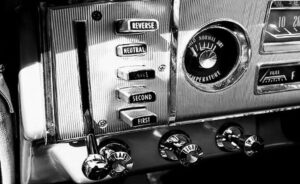 It was, for me, not exactly love at first sight. There were those who said I was wasting my time with her; that she didn’t come from good lines and that her family was nothing but a bunch of hot heads or, worse, nouveaux riches. Still, I persisted. I mean it wasn’t like she’d been omitted from any of the more recent lists of Who’s Who in the appropriate Blue Books,[1] right? After all, what more could they want from her? Her family had indeed built skyscrapers;[2] in later years some of her adopted kin even became synonymous with our efforts during the last World War.[3] Perhaps in spite of all these things, or because of them, she rather captivated me, and I must confess that I quickly fell in love with her.

Looking back, there were few like her who have been so true. Though much time has passed, the bond we shared was real. And yes, for those of you who are wondering where the “genealogical lesson” is in all of this, well, Balderdash, I say. If you must know, yes: “she” was just a poorly-documented machine, but I’d appreciate it if you’d not speak too unkindly toward her. The truth is “she” was a wonder, my very first automobile. She was a 1964 Dodge Coronet, a four-door sedan, and, if you promise not to speak ill of her in the rear view mirror, or exhaust her secrets by saying so, she was very much a part of my family history. Yes, there were some who said she was never the best dressed or prettiest girl in town. Then again, they never knew her like I did.

Painted the most unmemorable shade of beige any mid-1960s car ever, she did her best to wear it well. The seating she provided was of an undistinguished tweed in an indeterminate array, and plush “pleather” encased most of the fittings in her interior’s design. She had a “push-button” transmission on the dash, one that operated with a lever and much like a glorified gear shift. She also had one of those trunks that, forgive me for saying so, you could hide a couple of dead bodies in. (Just kidding!)

As with a single strand of pearls, she wore only most modest pieces of chrome to adorn herself. She was, after all, not deluxe. And while she would never have caused you any embarrassment at the church picnic, she might just as well have fit in at that upcoming Grateful Dead concert for a Day on the Green.[4] Rest assured, though, her humble ways were never gonna help you get voted class president, or “most popular” in the yearbook for 1974.

The size of her engine, oddly, I cannot remember. It seems she was one of the smaller V-8 Mopar engines of the day. I suppose I should know this, or be able to recall, but at the time “she and I” lived a bit in the moment and “her measurements” were never all that important to me. The fact is, she never, ever left me stranded. She, with her hot-blooded radiator that traversed the high roads of the Grapevine[5] to Mt. Shasta. She, with her “retread tires” that had motored me from Berkeley (with my then-alleged-contraband) across the Carquinez Straits to any and all destinations down the road. She, with her humble visage, inopportune tires, and problematic radiator, faithfully cruised down those old roads and highways.

She didn’t fail me when I got my first speeding ticket, either. I’d been going 90 in a 65 while heading back to Southern California after a visit to Dad’s. Man, she could fly when she wanted to, and I sure paid the price for that with Mom. (She nearly helped me land myself in the pokey that time, through no fault of her own, of course.) She always kept my secrets, too; never venting a word to Mom about those pungent smoke-filled parties with friends, or about my “learning curve” with Eileen in the back seat for a triple feature at the Warner Drive-In.[6] Yes, she was a true friend.

She was with me all the way through high school and traveled with me once (along with a certain redhead) from the wilds of freeway-riddled Orange County to a “no-tell motel” in the desert where they looked the other way with regard to just about everything. Then she cruised with us on to Death Valley where my 17-year-old self promptly got that old Dodge stuck in the soft shoulder trying to make a “U-turn” in the desert. Man, I was dumb. I mean, really. Who makes a U-Turn in Death Valley?

She went with me to college, and in ‘74 waited with me in those long lines while they rationed gas.

She went with me to college, and in ‘74 waited with me in those long lines while they rationed gas. Ever faithful, she hauled “my stuff” both north and south from home to dorm to apartment and back again. Like many relationships over time, though, our mutual appreciation for each other’s needs began to wane. We ended up taking each other for granted. She needed things, like new tires and oil changes, and good Lord she had an appetite for gasoline. There were times when she seemed like an alcoholic on the hunt for her next Harvey Wallbanger.[7] I mean, couldn’t she see that gas was 53 cents a gallon?! Did she think I was made out of money?? Plus, it was 1974. Everyone knew we would be completely out of gas in fifty years. After all, the oil companies said so. Why would they lie? I tried to tell her that we just couldn’t keep going on this way. I don’t think either one of us knew just how good we had it.

I certainly didn’t. It got tougher, too, watching her out there in the university parking lot, her beige paint wearing thin in the hot California sun. Invariably, I’d get stuck parking her next to “He-man” Mike Marasti’s ‘73 Charger, or worse, suave Roberto’s snazzy red ‘74 BMW. She just looked so plain and ordinary. I guess I must have complained about her long enough that Dad grew tired of listening to his college student-philosopher son and his car troubles. Dad was, after all, an auto dealer, so why couldn’t he make that old Dodge disappear for his spoiled and sophomoric son?

Soon enough, he summoned “us” home, there to meet my “new model” and face the old gal’s demise. Once there he presented me with a “gas pinching earth green” 1966 Volkswagen as a replacement. I remember thinking this “New Bug” will be perfect!! My mandala and my patchouli oil ways would finally be free of that damn boring old Dodge. I don’t even think I looked back as I ground the Bug’s clutch into second, searched through the ash tray for gas money and other accouterments, and “geared” my way across the Bay Bridge back to school. Mike Marasti’s stupid new Charger might be fast but, really, how cool was I?

And then she was gone. The love of my life simply vanished into the back lot of my father’s automobile dealership, and my “automotive love” would never be the same. Stupid me. I wasn’t even smart enough to know it. Truth be told, that little Green Bug turned out to be a Hell-ish roach, and nothing more than an “I’ll leave you stranded” high maintenance pain in the a**… So much for saving the earth in a Green Bug.

As the years passed by, I looked for her. Down every highway, I kept thinking I’d spot her; you know, to make amends with her, and maybe beg for her forgiveness. I reasoned if I ever found her again that I’d ask her to come home and back to me. Once in a while I’d catch a tail light that would make me think she was just two cars up at the International Bazaar, or, on a dark, rainy night, a set of headlights to make me believe she wasn’t far away at all, and that she’d been trying to find me too.

Once, while working at an auto dealership in the late 1980s, the sales manager took in a like model of hers “on trade.” But it wasn’t her, just some automotive relation, an unacknowledged sibling on the back of a tow truck, dangling unwanted and torn. At the time I kept wondering if I couldn’t restore this “sister” to some past glory and make up for my hubris in letting “her” go way back when. Still, in the end, it just wasn’t her.

Mostly now she sits in my memory garage. Her beige paint is polished up brilliantly, and she shines in the overhead light of my mind. Her interior is Spic and Span, and a fresh Little Trees[8] hangs from her rearview mirror. Heck, there’s even a sticker that says she had an oil change just the other day. Her gas tank is full of high-octane-fueled memories – some that I only paid 53 cents a gallon for! And wonder of wonders, she blushes black in her new “Armor-all-ed” white-walled tires. No more retread tires on my girl. She sports only the best radial tires memory can buy. Sometimes, I just sit in that garage with her; it feels safer, somehow, and life a little more complete.

In terms of my family history, she’s what we genealogy types call a “brick wall.” You see, paradoxically, she’s truly a bit untraceable even with the finest of pedigrees. Yet how can you go wrong with a family tree that links her not only to the Industrial Revolution but also the Daytona 500? How can you go wrong when her very own cousins have the Mayflower stamped on their radiators?[9] Yet outside of my memory garage she really is lost to time. There’s no paper trail, or rusty plate, or date of manufacture to be found. There’s no high-octane DNA test that will find her, and no entry in a dogeared corner of a Rand McNally that would lead me back to her. I know that you’re probably thinking this is just more of my genealogical chicanery and, well, perhaps you’re right. But while I may never see her again outside of that memory garage, you can bet your sweet bippy[10] that “she” will always belong in any family history of mine.

[1] In this case, Kelley “Blue Books,” an automotive valuation guide and a company found in 1926.

[2] A reference to the Chrysler Building (1930) on the East side of Manhattan in New York City.

[4] “Day on the Green” was a recurring concert in Oakland, California, presented by promoter Bill Graham, and ran from 1973 into the early 1990s.

[5] A mountainous stretch of Interstate 5.

[6] The “Warner Drive-In” was a movie theater that operated in Huntington Beach, California 1961-84.

[7] “The Harvey Wallbanger” cocktail is reputed to have been invented in 1952 at a bar in Los Angeles, California.

[9] Per: reedbrothersdodgehistory.com/: “The first Plymouth automobile debuted on July 7, 1928, to help Chrysler Corporation compete with Chevrolet and Ford in the entry-level market. The name was inspired by Plymouth Rock and the first Pilgrim colony in the United States, and the Mayflower ship was stamped on the radiator.”

[10] “Bet your sweet bippy,” was an expression used on Rowan and Marin’s Laugh-in, and ABC television program from the early 1970s.