“The thing that interests me most about family history is the gap between the things we think we know about our families and the realities.” – Jeremy Hardy[1] 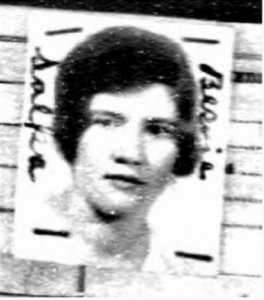 Remember that children’s game of Telephone (or Gossip) in which a message is passed on in a whisper to each of several people, so that the end version is often distorted from the original? Family stories are like that old game and can be even more distorted depending on how many narrators related the story to how many listeners. I recently found one example in Husband’s maternal family history concerning (ahem) One Child Left Behind.

The story was that Husband’s maternal grandmother, Catherine (Hrabal) Samson (1906-1987), had emigrated in 1910 as a child with her family from Czechoslovakia (or Czechia, Bohemia, Austria, or Moravia, depending on which U.S. Census you want to believe and what the international politics were at the time). Her sister Bessie, the youngest daughter, was ill when it came time to leave, and was “left with a family who also had to stay behind with a sick child.”  Then World War I happened before the family could get her to the United States, and then World War II happened, and Bessie didn’t get to “Michigan America” until after the Second World War.

As touching as this story might be, it made no sense to me. Why would it take twenty-some years to make that trip if indeed Bessie wanted to join her family. Husband had thrown out the challenge: could I find what really happened to Bessie? Is there a family history researcher who would say “no”?

I started with what I knew about his grandmother, a daughter of Johan and Katerina (Helisek) Hrabal. Her 1910 immigration papers show her with her parents and older sister Agnes, but no Bessie. Catherine was about 4 years old, so if younger sister and third child Bessie was too young and sick to travel, I guessed that she must have been born between 1907 and 1909, an infant when the family left the Czech Republic. But the 1920 U.S. Census for the John Hrabal family had no Bessie listed.

At least the “left behind” part seemed to be true, but where was she?

I’ll note here that my fluency in any Slavic language encompasses one or two words badly mispronounced and spelled, limiting me to English-language records and a few translations. I tried every Czech version of the name Bessie I could think of, and a few of a more Polish origin. No luck.

I tried every Czech version of the name Bessie I could think of, and a few of a more Polish origin. No luck.

I knew from Husband that Bessie eventually married Jacob Skalka and lived in Canada, so I decided to work “backward,” but searching for Bessie was turning up very little. It was when I started to search newspapers that I discovered the simple truth: Bessie’s birth name was Bozena! No one in the family ever knew her by any name other than Bessie, partly because the family’s prevailing attitude was that “in America we speak American!” Even Grandmother Catherine never used her birth name of Katerina; she was always Cathy.

Once I searched for Bozena Hrabal, Bessie’s story began to tell itself. She had been raised in Chechia/Czech Republic/Bohemia, perhaps by the “Aunt Marie Bajerova” listed on Bessie’s New York immigration passenger list as her contact in the “old country.” Bessie arrived in New York on August 17, 1928, after leaving Bremen, Germany on 8 August on the SS George Washington. She had paid her own way as a “First Cabin Passenger,” traveling to her father Johan in St. Louis, Michigan, yet she didn’t have a ticket for the New York to Michigan part of the journey. She made it anyway. (I still wonder if she had ever met her father and mother or her siblings before she arrived in Michigan. Travel to and from the Czech Republic in the 1920s would not have been all that easy.)

Apparently Bessie was quickly drawn to Canada, but on her December 31, 1929, attempt to enter Canada, she was “rejected, no appeal” because she was a Czech national. That can’t have been a wonderful way to celebrate New Year’s Eve!

[She] was “rejected, no appeal” because she was a Czech national.

By the time the 1930 U.S. Census was taken in St. Louis, she was living with her family; later the same year she was counted as a servant living with the Francis D. Balicki family in Detroit.

Bessie eventually won the right to enter Canada and married Jacob Skalka on September 12, 1930, in Windsor, Essex, Ontario. At her marriage, she became a naturalized Canadian citizen because her husband had been naturalized on April 20, 1929; under Canadian law at the time, her naturalization came under her husband’s.

For years Bessie and Jacob visited Bessie’s family in Detroit, and Husband remembers meeting “Canadian relatives,” although he was too young to know exactly who they were.

The Skalkas were married for 65 years and had one daughter, Lillian, who married Thomas Soulliere in 1952. Bessie passed on in 1995, two years before Jacob in 1997. Husband’s DNA matches might at some point connect him to any living descendants who might be able to add more life to Bessie’s story.

I met Husband’s challenge, but I think I should have made it a bet for, say, a hot fudge sundae. I could use one about now!