Robert Gould “Bob” Shaw, a longtime staff member at NEHGS, passed away last month at the age of 82. Bob had worked in several positions at NEHGS, including associate editor of our magazine NEXUS, assistant editor of our magazines New England Ancestors and American Ancestors, and for many years as archives assistant in the R. Stanton Avery Special Collections. Bob was also interested in his own genealogy; an amusing anecdote arose when a member asked what Shaw family he descended from, and Bob replied “the right one.” 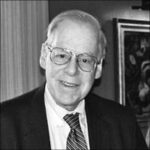 Bob was one of several men of the same name in his family, although only the first one, Robert Gould Shaw (1776-1853), was in his direct ancestry. This first Robert Gould Shaw was born in Gouldsboro, Maine, a newly-settled town created from land given to Robert Gould, Col. Nathan Jones, and Francis Shaw in 1764 by the General Court of the Commonwealth of Massachusetts (which then included Maine). Francis Shaw and Robert Gould were both merchants from Boston, and the latter was the namesake for both the new town and the eldest son of Francis Shaw, Gould’s business partner. Francis Shaw had worked hard to develop Gouldsboro, and reportedly died broke because of it, and his son Robert Gould Shaw returned to his parents’ native Boston.

The most well-known of the name was Col. Robert Gould Shaw (1837-1863) of the Massachusetts 54th Regiment, the first regiment of African American soldiers in the Civil War, semi-fictionalized in the movie Glory. Colonel Shaw was killed in 1863 at the Second Battle of Fort Wagner in South Carolina and was buried with his fellow soldiers. A bronze memorial to Shaw and the 54th Regiment can be found on Boston Common, near the Massachusetts State House; it was recently restored and rededicated. Colonel Shaw himself was the third of that name after his grandfather and uncle. Bob wrote a review in the 2000 Register of Where Death and Glory Meet: Colonel Robert Gould Shaw and the 54th Massachusetts Infantry, on the history of his namesake first cousin three times removed.[1]

[When] a member asked what Shaw family he descended from, … Bob replied “the right one.”

The simplified chart I prepared below outlines all the men to date with the name Robert Gould Shaw. This chart does not identify all male Shaw descendants, only those with the shared name or those that are ancestral to men with that name. Using retroactive suffixes, Bob Shaw of NEHGS was the ninth of his name and was in the sixth generation, one year older than the tenth Robert Gould Shaw who was in the fifth generation. If any readers find an additional Robert Gould Shaw that I missed, I will happily update the chart with the appropriate suffixes.

As Bob’s obituary notes, he was also a longtime member of the Society of the Cincinnati, a fraternal hereditary society founded by officers of the Continental Army and Navy at the close of the Revolutionary War. Bob represented his great-great-great-great-great-uncle, Capt. Samuel Shaw (1754-1794), Aide-de-Camp to Major General Henry Knox. Captain Shaw joined the Society at its formation in Fishkill, New York, in 1783, serving as Secretary of the Officers who organized the new organization. The Society allowed for hereditary membership to the next male heir. As Captain Shaw had no children, membership passed to his younger brother William Shaw (1756-1803), and afterwards to their nephew, the first Robert Gould Shaw; he was in turn succeeded by his son Francis George Shaw, the father of Colonel Shaw, who would have succeeded to membership had he not died in the Civil War. As Colonel Shaw had four sisters, membership then passed to his first cousin George Russell Shaw (Bob’s great-grandfather), where membership was continued for four successive generations, and Bob was the senior male heir of the Shaw family.[2]

Note for Chart: Robert Gould Shaw “V” (1872-1930) married twice. His son on the chart, Robert Gould Shaw “VII”, was by his first wife Nancy Witcher Langhorne (who after her divorce married Waldorf Astor, 2nd Viscount Astor). By his second wife, Mary Hannington, Robert “V” had a son Gould Shaw (1904-1955), who is mistakenly identified as “R. Gould Shaw” in the 1920 census.

[1] The book also notes that as a child Colonel Shaw met many prominent anti-slavery people, including William Lloyd Garrison, Harriet Beecher Stowe, and Lydia Maria Child, this last included in my recent post on Child cooks.

[2] James Archer O’Reilly III, Memorials of the Massachusetts Society of the Cincinnati (2004), 344-46. As Bob’s younger brother was adopted, through “agnatic primogeniture” the next senior male heir of the Shaw family is Bob’s third cousin once removed (not on the chart) – Samuel Parkman Shaw “VI”, sharing the same name as his father and grandfather, the last a son of Samuel Parkman Shaw “III” (1877-1973) on the chart. If considering “male-preference primogeniture,” the most senior male heir of the Shaw family is a great-great-grandson of Colonel Shaw’s sister Anne (Shaw) Curtis. Col. Shaw’s younger sister Josephine Shaw married General Charles Russell Lowell, and is treated on page 38 in The Descendants of Judge John Lowell of Newburyport, Massachusetts.

10 thoughts on “Remembering Robert Gould Shaw (all of them)”