This past couple of weeks a lot of the old ghosts have decided to haunt me. Just when I think I’ve got them all figured out (especially a significant one like that of my paternal great-great-grandfather John Henry O. Record), a surprise comes along to teach me that I still have much to learn. Now, I’ve studied John Henry’s ancestry until I’m blue in the face. I’ve looked at journals and notes handed down from his daughter Grace[1] to her daughter Barbara.[2] I’ve studied Civil War era pension files and been privy to deathbed letters from his mother Susanna[3] to his brother George.[4] But a few weeks ago, something very rare and unexpected showed upending most of what I thought possible to know or discover about my Record family. I happened to stumble upon Maggie.

Like you, I’ve seen a lot of family photographs over the years. However, there’s one type of photograph I’d never seen before: an early twentieth-century photograph of a member of my family who wasn’t from the Jayhawk State and, well, who never could have been. You see, I had discovered Maggie Ricketts; that is, a photograph of her from Maryland’s Eastern Shore.[5] Up until this point, I had never seen (let alone known of) any extant family photographs from my family’s members on the Eastern Shore. My family’s westward migration had left all past and future “photographic connections” behind. I guess right about now you’re wondering: So who the heck was Maggie Ricketts?[6] Hang in there with me. I’ll get to that, I promise.

I hadn’t started out looking for Maggie. Rather, I’d been alerted to a newfound Ricketts/Rickards/Record family bloodline out of the Eastern Shore of Maryland by a fellow Eastern Shore researcher.[7] Based on both evidence and reasoning, this researcher proposed a “new” and likely older sister for my great-great-grandfather John Henry O. Record. The name of this sister was Margaret Ricketts. While not the “Maggie” in the photograph above, this “elder Margaret” was the lady who would start me on this journey of family lines and discovery – and bring me round to discover the pictured Maggie Ricketts above.

I hadn’t started out looking for Maggie.

Now, no one has ever mentioned a sister of my great-great-grandfather John by the name of Margaret – at least not in recent memory. Nor have I ever seen any ‘repetition’ of the name Margaret or Maggie as I’ve researched the Ricketts/Rickards/Record family. Suffice it to say, however, that the inter-marriages among the nineteenth-century Eastern Shore families were convoluted at best (an understatement) and the Record/Ricketts/Rickards family is no exception. Perhaps because of this, it’s no wonder that the name “Margaret” got lost in the shuffle.

Margaret Ricketts/Rickards[8] “the elder” was married twice. She married first William Stevens; as her second husband, she married Josiah Willin. It was in the mention of the surname “Willin” that my curiosity was piqued. I recalled that my great-great-grandfather John’s brother Thomas had a daughter Elizabeth “Lizzie” Ricketts who had married a Thomas Willin. I wondered if it were possible that I might have any DNA matches to any “Willin/Ricketts” descendants, so I checked for any on Ancestry.DNA. There were three of them. One was matched to a descendant of Thomas’s daughter, Lizzie (Ricketts) Willin. The other was a mystery match, with an attached pedigree chart that looked like this:

The DNA showed a match to a granddaughter of a man named Norman Willin. There was also a note attached “to Norman” that accompanied the pedigree. It read:

“Parents unknown: 1930 census shows his place of residence in Federalsburg, Md with his aunt & uncle. Later moved to Laurel, Delaware.”

The problem with Norman Willin was that there was a lot of dust on the surface of his life. Records revealed that Norman’s father Winfield Willin had died fairly young. They also revealed that Winfield Willin was a cousin of Thomas Willin who had married Elizabeth “Lizzie” Ricketts. It was further revealed that Norman Willin’s mother was Margaret “Maggie” Ricketts, a “younger Maggie” whose father Thomas Ricketts/Rickards/Record was my great-great-grandfather’s brother. This “Maggie Ricketts” had seemingly been named for her father Tom’s sister, “the elder” Margaret. Maggie Ricketts “the younger” was married three times, and Norman Willin was her tenth child by her second husband. 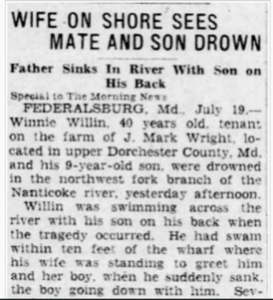 By way of summary, Margaret “Maggie” Ricketts and Elizabeth “Lizzie” Ricketts were sisters. My great-great-grandfather John Henry O. Record’s brother Thomas’s two daughters (Maggie and Lizzie) both married Willin men (Winfield and Thomas Willin), who were in turn cousins to each other. To compound matters, as mentioned above, their aunt Margaret Ricketts “the elder,” my great-great-grandfather’s posited older sister, also married a Willin boy – another cousin of theirs, Josiah Willin.

Needless to say, the study of my direct line of the Record/Rickards/Ricketts family from Levin Rickards and Susanna (Murphy) Rickards is one that has evolved in information over the last seventy-five years or so. More than this, the study of the Record family (and forgive me if I isolate into using the spelling of the family surname that I was born with) has exposed me to the hardscrabble life of Eastern Shore of Maryland and Delmarva Peninsula residents.

These were people who largely never learned to read or write, married very early, had huge families both in and out of wedlock, and, more often than not, were either the perpetrators or the victims of horrendous crimes. Understanding “my folks” from the Eastern Shore has required me to swallow a whole lot of pride. Generally, these were hard-working people, but more often than not I find that they were not especially good people. In studying the huge branches and proliferation of descendants of my great-great-grandfather I can only come up with one very significant conclusion, and that is: Thank God we caught the wagon train to Kansas. Doing so surely saved all of our bacon.

Be that as it may, I wanted to give you a very brief snapshot of what that particular genealogy looks like with an update to it:

I know that most of this information will mean little to you and make even less sense. I sincerely appreciate you taking the time to read through this story of Picturing Maggie. I would like to let you know that the Maggie Ricketts pictured above had an unusually hard life. She watched from the shore helpless as her second husband Winfield and her son Frank drowned.[9] Her eldest daughter Edna was reputed to have been abducted and allegedly raped at ten years old.[10]  So if you’re looking at the picture of Maggie Ricketts above and thinking: She looks like one tough customer… Well, you are right. Maggie Ricketts had to be able to survive the onslaught that was her life. I can only hope that somewhere somehow she rests in peace.

Yep. I’m very glad we came to Kansas on that wagon train.

[3] Susanna (Murphy) Rickards (ca. 1812-1862). Her identity was confirmed as “Susanna Neal,” wife of Cyrus Neal, through a deathbed letter written to her son George Reckords. The letter also names her son John and daughter Leah. Her maiden name as “Murphy” is undetermined but is speculated insofar as the marriage records of her daughters Margaret Ricketts and Leah Ann Ricketts both use the surname “Murphy,” which was presumably their mother’s maiden name. Neither Margaret or Leah could read or write, and since their father was dead at the time of their marriages, it is speculated that they were considered the “Murphy girls” as it related to their mother’s family. The Murphy and Ricketts/Rickards/Record families were both numerous on the Eastern Shore and in Delmarva.

[7] The researcher’s name is Barbara Williamson. She and I first became acquainted when she was researching the Stack family of Dorchester County, Maryland, and their relationship to my great-great-grandfather’s sister Leah Ricketts’ second husband John Stack.