I’ve been wanting to tell you about Martha. She’s my best friend of sorts, both before and after there was ever anything of me to call a life of my own. She certainly knows me very well, or at least half of everything, anyway. Thinking about it, I can’t say as she hasn’t heard all of my innermost thoughts and confessions. And while I don’t always heed her counsel or advice, I always feel it in my bones. Hers is a great concern for my well-being and survival. Truth be told, Martha is in the deepest recesses of my ancestry. Oh, she can be a bit shy and defiant, and it’s true that she often thinks she’s a lot funnier than she actually is. Yes, I’ve been wanting to tell you about Martha, and just what Martha means to me.

I hope I haven’t confused the subject of Martha by referring to her like some favorite ex-wife. That would be a bit indelicate to say the least. You should know, too, that I’ve never seen “Martha’s mark,” or her “X,” so I can’t speak to it. Further, while I suspect that Martha could read and write with regard to her “X,” it’s only my wishful thinking that she is someone one can know much more about. At the risk of being utterly cryptic, let me just say that, yes, I am referring to my X chromosome. The one Martha gave me.

We genealogical types are constantly trying to figure out just who we are. Much like quixotic time travelers, we meander through ancestral lines hungry for any truth that will shed light on our genetic makeup, if not the entirety of our family story. We fill in the blanks and hey! it gets complicated. In light of this, I decided to go a bit Occam’s razor on some of the twists in ye olde branches. I wanted to do something more direct. It didn’t mean that any research or answers would be easier, only that my approach would be “more lineal.” I decided that rather than trying to zigzag through “the fruit of many vines,” I’d try some zen with that razor and shape my genealogical research rather than trying to cut it up. I decided to Follow it straight back.

That’s when I remembered “Martha’s X.” I mean, it wasn’t going to do me much good to go chasing after the “Y”s. (That patrilineal Big Cheese had drowned in Chesapeake Bay centuries ago.) You see, genetically speaking, there was a good chance that “Martha’s X” might still be around among her matrilineal descendants. I resolved to follow the line back to Martha. This line of research certainly didn’t mean that I was suddenly going to have all the answers. In truth, I didn’t want them. What I did want was a starting point to help me put some flesh on the old bones.

I don’t expect one hundred percent accuracy. I’m not even aiming for it. What I am trying to do is tell one story that might literally connect me to my absolute present tense self. Now, we all know that I aspire to be a Royal Bastard or to prove out a line with the Society of the Cincinnati. However, in the meantime, I’ll be just as happy to have an anecdotal story, one with nodding acquaintance with, you guessed it, Martha’s X. 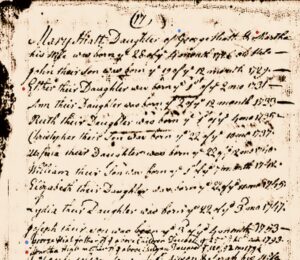 Her full name was Martha Wakefield (or “Notorious X,” as I now like to call her), and she is my earliest known direct female ancestor. As they say, she’s “the only one for me,” insofar as I cannot trace any other “direct line” female X chromosome ancestor past her. At present, I know of no “non-parental event” that would debunk my connection to Martha Wakefield or her X chromosome. Indeed, I have many shared DNA connections who also trace their own “mutual” X chromosome back to that one rather amazing lady.

Martha Wakefield was likely born in Ireland ca. 1700. The tales are vague about this, but they all generally refer to her as having been born in Belfast and of Scots-Irish ancestry. The origins of Martha’s nativity haven’t concerned me much; aside from her being a Protestant from Belfast, her genetic mysteries past this point surely don’t tell the story of her life. Suffice it to say, I accept this unauthorized biographical account of her origins. I have no need to go beat on the doors of Granite Mountain[1] to learn otherwise. To the best of my knowledge, I carry Martha’s X inside of me, and to disrupt that lore or interrupt that pattern feels more like heresy than genealogy. I suppose it would be fun to discover that historically she’d been spawned by Druids, but one can only hope for such things. And after all, the Druids were terrible at record-keeping.

Martha married George Hiatt, or “Hiett,” before 1726, the date of their first-born child in Quaker records. The Hiatt family was “of Bucks County, Pennsylvania,” though it’s unclear when Martha arrived there. The young family lived for some time on the Monocacy River in Maryland before making a final migration to Guilford County, North Carolina. Here they joined the New Garden Meeting. Most derivative sources I looked at offer the “rumor” that Martha Wakefield was “a noted Quaker minister.”[2] It was even said that she rode horseback about the countryside to meet with others in the administration of the Quaker faith.[3] I have to say, the thought of “my X” chromosome riding about in the wilds of North Carolina to try to bring some light into the world is, well, humbling.

Martha Wakefield and George Hiatt went on to have oodles of children. After all, who didn’t back then? There are eleven of them in the Quaker records.[4] (And let’s face it, the Quakers were far better at record-keeping than the Druids were.) I am a descendant of Martha’s daughter Esther. Martha’s great-granddaughters Esther and Ruth had children (named Martha and Asa respectively) who married each other and were first cousins. While somewhat disturbing, the pairing of these X’s does give a peculiar double line of decent for me from Martha Wakefield and her husband George. Hey, we don’t get to pick our family, right?

I’ve had pretty good luck filling in the blanks since Martha. While mention of her Hiatt descendants within the Quaker records appears to have waned after the marriage of Martha’s great-granddaughters Esther and Ruth into the Tomlin and Lacy families, this seems to have occurred more out of economic necessity via the general  Westward Ho migration pattern of the times than through an outright abandonment of the Quaker faith. Indeed, Martha’s great-great-grandchildren (and married first cousins)  Asa Clevenger Lacy and Martha (Tomlin) Lacy are buried together at the Quaker cemetery at Ackworth, Warren County, Iowa. Further, their daughter Martha (Lacy) Ginder’s in-laws are also buried in that same cemetery.

By now you’re no doubt asking yourself: What does all this mean? I know I am. Aside from the likelihood my name would have been “Martha” had I been born a girl, I’m unsure. And while I’m not heading out immediately to buy a copy of The Journal of George Fox,[5] I am going to stand up and take note that “my X” might just be able to help me to practice that awesome mantra of Be still and cool in thine own mind and spirit.[6] Oh, my! What a legacy I get to carry within me via Martha’s X! So, yes, I wanted to tell you about Martha, and a little bit about her small and humble life. I spend so much time chasing the ghosts of Salem and Plymouth (and a few of those folks who don’t want to be found) that it was nice to fall back on Martha, on her X, and see that I might have a shot at “genealogically redeeming” this old soul of mine after all.

When your genealogical brick walls are getting the best of you, or if the mysteries of your admixture continue to confound, just remember that some of the most relevant portions of your ancestry you already “feel” quite well. Think of it sort of as an “X”-marks-the-spot deal – the spot of life that is, well, you. You see, the best part about Martha for me is that she lives on. She lives on in the beautiful artwork shared with me by the kindness of a modern-day stranger by the same name. The kindness of a stranger who happened to paint that X so incredibly well. Martha’s X lives on, too. It lives on in the tiny little lives who carry Martha’s X with them even now. What a beautiful world we share in, so full of hope. They give me something to look forward to when this generation of Martha’s X is just a distant memory. Thanks, Martha!

[1] A “mountain vault” containing a large collection of genealogical records in the custody of the LDS Church.

[5] George Fox (1624-1691) is generally considered the founder of the Society of Friends (Quakers). George Fox’s journal was originally compiled and edited by Thomas Ellwood in 1694.

[6] A quotation attributed to George Fox.