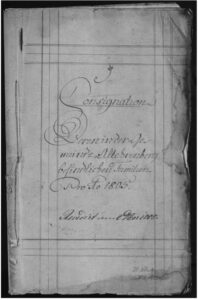 Two years ago, I wrote about my success using Bohemian church books to further my research into my grandfather’s Czech ancestry. Church records are key for Czech/Bohemian research, as is true for genealogical research in many European countries. However, they are not the only source of genealogical material available to us. Recently, FamilySearch.org has been adding collections of land records for many locations in the Czech Republic. As of this writing, many of these collections are still marked as “preliminary,” to “allow immediate online access.” Recent uploads appear to be from the State Regional Archive in Litoměřice.

The land records being made available broadly include two types of items: land registers and what I will call “lists of inhabitants.” A guide to the land registers is available on the FamilySearch wiki. These registers include declarations of ownership, transfers, and inheritances. The lists of inhabitants, on the other hand, are more like census records. It seems that little has been written on the origins of these books and how to use them but, after spending several hours working with them, I found them to be an excellent supplement to the church metrical books.

The lists of inhabitants are organized at the town level and can be found in the “Land and Property” category on FamilySearch. Each book is labeled with a rather cryptic title, such as “Land records, 214000010-0049-SoupisPoddanych-ic624-48, 1761.” Soupis Poddanych translates to list of subjects. There were many contemporary titles for these books; browsing through collections from different villages, I found that the first page was often titled something like Consignation der Gemeinde, Vorgestehen Register, or Mannschaft Register. Lists exist from roughly the late 1600s to early 1800s, though the exact years available vary from town to town.

Written in German using Kurrentschrift, these lists are organized by house number and give the names and ages of each member of the household. Occupations and relationships are sometimes also given, and the list may indicate if a member of the household was recently deceased or working elsewhere. For example, the 1798 list for Altehrenberg (Staré Křečany) shows that 17-year-old Helena Ließner was not at home living with her father but working as a maid in the town of Schönlinde.

These inhabitants lists are particularly useful when church records no longer exist for a location. Franz Joseph Ließner moved to the town of Altehrenberg when he married Maria Johanna Rosche in 1770, but he was born in Nixdorf. Nixdorf (known today as Mikulášovice) lost its church and metrical books in a fire in 1780. Franz Joseph’s death record from 1820 indicates that he was born in 1738 and, therefore, his baptismal record was one that was lost in the 1780 fire. Inhabitants lists exist for Nixdorf from 1750 to 1771, allowing us to go back further.

Starting with 1766—the first list from before Franz Joseph’s move to Altehrenberg—we can find Franz Joseph living with his father, Johann Christian, at house #281. The list shows Johann Christian’s occupation (merchant) and specifically states that Franz Joseph is his son. Following the family back through the lists, we can identify new family members. The earliest list, from 1750, shows the family living in house #287 (see image). The household consisted of Hanß Christian Lyßner, age 59, a merchant; his wife Anna Maria, age 56, who either died shortly before or after the list was made; and their two children Maria Elisabeth (age 19) and Franz Joseph (age 13). Due to the loss of church books, these lists proved invaluable in identifying Franz Joseph’s parents and siblings.

2 thoughts on “Land records in Bohemia”