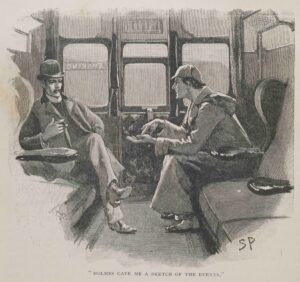 About three months ago, I was contacted by a man hoping I could help track down some information about someone in my family tree.

“I found something interesting about a possible past relative of yours named Helen Elizabeth Wilson. I found her in a Cornell University magazine, and she wrote an article about Sherlock Holmes which may be the first of its kind ever written anywhere in the world. I am a Sherlock Holmes researcher and would love to know a little more about her. Is this something we can discuss? I appreciate your time.”

My time, when the request came in, was sadly in short supply. It was only a few days before Christmas, my husband is an Episcopal priest (can you say “super busy time”?), and our son who lives in the Midwest was out visiting us for the holiday. The proposed sleuthing adventure was quite intriguing, though, so I was game.

He replied: “Awesome! The part of the Sherlockian hobby I’m most invested in is the chronological side of it. The 60 original Sherlock Holmes stories contained many small errors for setting them in a proper chronological sequence, and it’s fun to be involved with. I’ve been involved in this niche for over 20 years and am constantly doing research. The earliest accepted attempt at placing the Holmes cases in a chronological order was believed to be in 1909. There’s an article in a Cornell magazine from 1898 written by (I believe) Helen Elizabeth Wilson. The article exists, and my find is being hailed as the earliest article/attempt of its kind ever. If Helen is the author, like I think, then my fellow Sherlockians want to make her known in our hobby. We have some info on her, but no photos. Do you have, or know anyone who might possess, a photo of her?”

This proved more difficult than I had hoped. Helen Elizabeth Wilson was the sister-in-law of the mother-in-law of my paternal grandmother’s first cousin, Paul Frederick Hawley (1910-1991). She was a teacher, and died unmarried at the age of 24 with no known heirs. Additionally, her two nephews and one niece all apparently died without issue …. so there didn’t even seem to be a chance that photographs of Helen could be collecting dust in some distant relative’s attic. Rats!

This proved more difficult than I had hoped.

Two days later I heard again from my correspondent. “Hello! I was contacted by the publisher of the newsletter your ancestor [sic] will be featured in, and he gave me a deadline of January 15th. I have no desire to rush you or anyone else on the picture thing, and they are aware that the article may run without one, so don’t feel any need to up your efforts. If it happens, it happens. When the published version comes out, I will get you a copy so you can read the praise we’re going to heap upon her. Have a great holiday and thank you for being on this journey with me.”

In the time I had available, I kept searching. Helen’s name appeared in a Cornell publication called The Cornellian, “The Book of the Junior Class,” in both 1898 and 1899,[1] but those volumes contained no student pictures. Sigh. I mentioned to my correspondent that it was too bad the publication didn’t have pictures, like the yearbooks of the same period in California. I had discovered pictures of three of my great-grandparents that way. 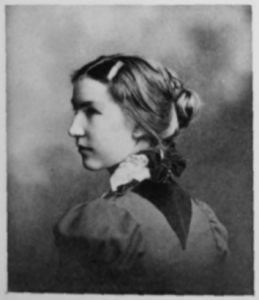 And then on New Year’s Eve, I got an exciting message. “I thought you might want to see what your relative looked like…” It turned out that another Cornell University publication contained the following information: “Helen Elizabeth Wilson was born in Addison, N. Y. She was prepared for college in Bath at the Haverling Union School. Since entering Cornell Miss Wilson has made Ithaca her home. She has specialized in English, and has been a contributor to the college periodicals. She takes the A. B. degree in June.” AND it contained her picture!

If this has piqued your curiosity, you can read more here … including Helen’s insightful attempt to put the stories of Sherlock Holmes into some sort of order. As we draw near to the end of “Women’s History Month,” it seems appropriate to celebrate the work of a brilliant young woman who died far too young.

[1] Viewable in the U.S. School Yearbooks section of Ancestry.com.

7 thoughts on “The game’s afoot”