Following up on my earlier post on the Roosevelt family, I noted that Presidents Theodore and Franklin Roosevelt’s kinship by marriage was the closer way they connected, as their closest kinship by blood was that of fifth cousins. (Their last common Roosevelt ancestors in New York City were in the early eighteenth century.) 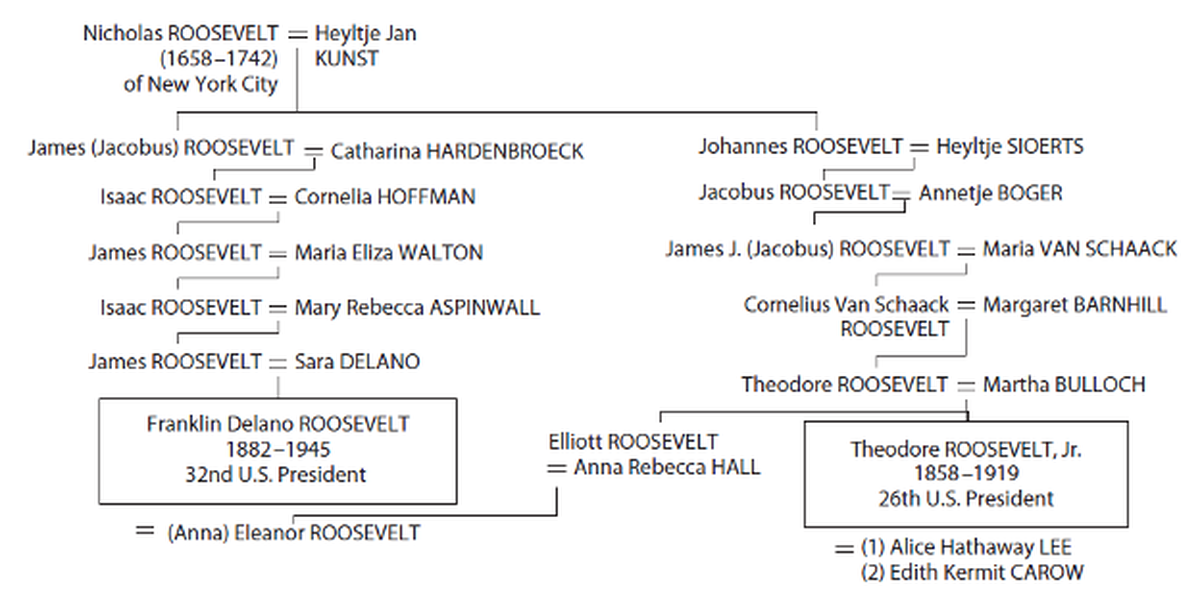 While it is common knowledge that the Roosevelts were distant cousins, after the Adams and Bush father and son presidents, and the Harrison grandfather and grandson presidents, there are several sets of presidential kinships that are closer than the fifth cousin kinship of the Roosevelts – most are at a few generations removed, but they begin at a closer “base” level of cousinship. James Madison and Zachary Taylor are first, second cousins through their common Taylor ancestors of Virginia, as well as second cousins twice removed through their Thornton ancestors. 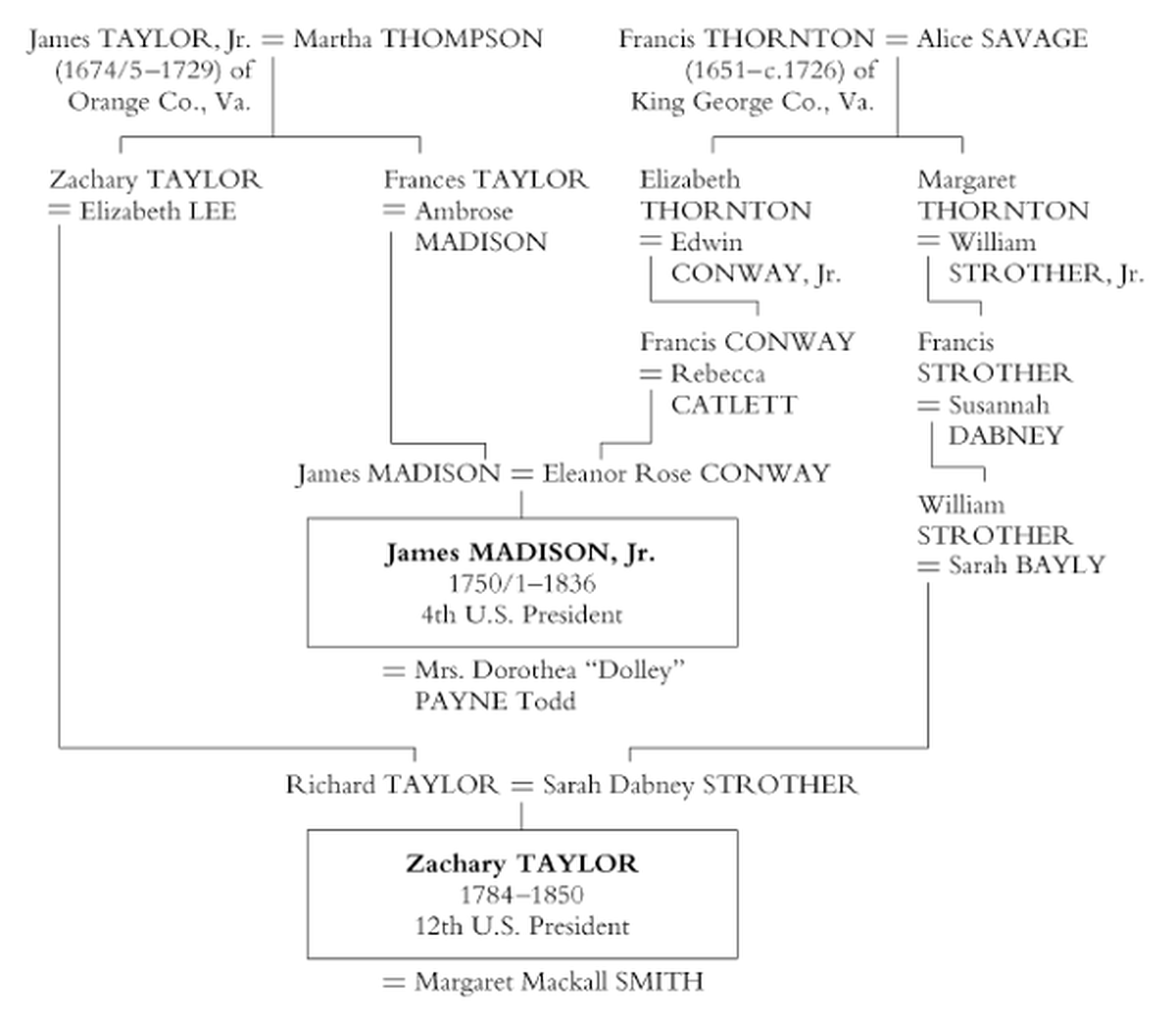 After that, there are several other kinships between American presidents that are closer than fifth cousins, through common American ancestors, all outlined in charts in Ancestors of American Presidents (AAP) (only the closest kinship between two presidents is given below):

Obviously, most of these closer kinships contain at least one earlier president who had fewer ancestral generations in the present-day United States.

Obviously, most of these closer kinships contain at least one earlier president who had fewer ancestral  generations in the present-day United States. The same would be for anyone distantly related to a president through colonial American ancestors. My closest kinship is to John Adams at third cousins eight times removed (through Samuel and Anne [Savell] Bass, AAP, pp. 466-67), followed by both John Quincy Adams and Franklin Pierce at fourth cousins six times removed (for J.Q. Adams through Henry and Anna [Goldstone] Bright, and for Pierce through Henry and Elizabeth [Johnson] Bowen). Your kinships to modern presidents are likely much more distant; my own most distant American kinship to an American president is as a twelfth cousin of the half-blood to Obama through our shared descent from George Allen of Sandwich, Massachusetts. George Allen is also an ancestor of Gerald Ford through George’s same daughter Rose (Allen) Holley, making Ford and Obama eleventh cousins once removed (AAP, p. 588), which I believe is the most distant kinship between two presidents through a shared American ancestor.[1] 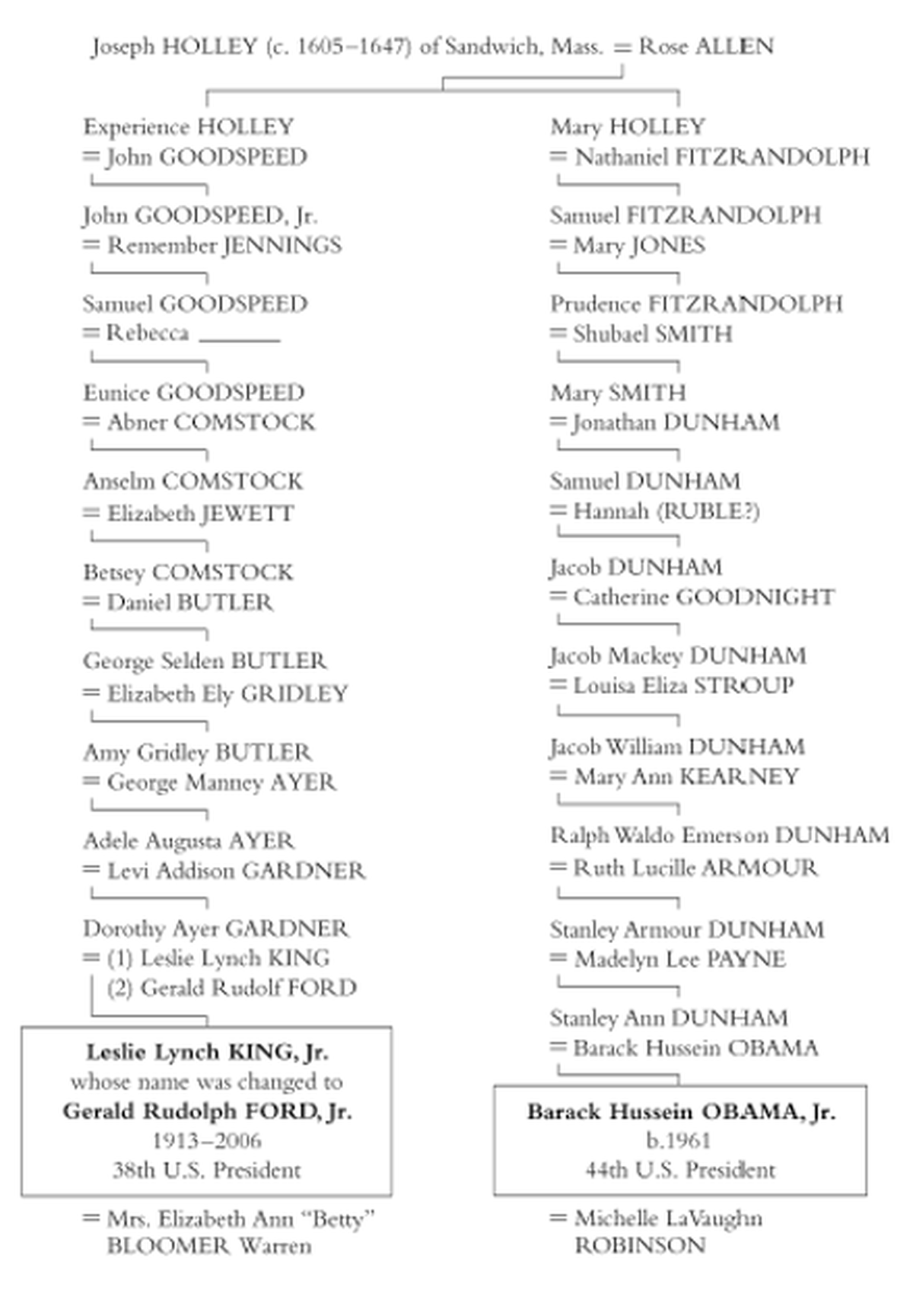 [1] Gerald Ford and George W. Bush are also eleventh cousins once removed through their shared descent from Edward Gilman (bp. 1557) and his unknown wife of Hingham, Norfolk, England (AAP, p. 453). However, this descent is through an ancestor who died in England, as his children were the immigrants to America. Also on AAP, 461 is a Stan(d)ley chart showing Ford and G.W. Bush as twelfth cousins, but this again is through ancestors who died in England who were the parents and grandparents of a few American immigrants. There are a few other kinships at this level or more distant in AAP, but all through common ancestors who had died in England.

11 thoughts on “The closest presidential kinships”