Please, let’s just keep this between us: Sometimes I watch television for my wife.

I have to say, though, that while I’m always happy to spend time with her, the idea of being sucked into one of those romance reality TV dramas she enjoys can really be tough. Let’s just say that they aren’t my go-to choice for entertainment. However, she often reciprocates, usually by watching any televised marauding Danes and Saxons alongside me. So, together, “we” have been somewhat compelled to watch this past season of ABC Television’s The Bachelor. After all, keeping balance and harmony in the household is important after forty-three years of marriage. I’m sure you get my drift…

Now, aside from my aspirations to work at Rotten Tomatoes, I strive to be a bit of a genealogical multi-tasker, too. In my mind, I’m usually running the possibilities of someone’s ancestry in almost any circumstance. In this case, and not to diminish the entertainment value of The Bachelor, I found my mind wandering while watching the high-stakes romantic drama. You see, I couldn’t stop myself from wondering: Just who are these people? This thought quickly turned my minds-eye into wondering just who “the bachelor” himself was. Who was this romantic conquistador enthralling so many of the ladies? Who was this electronic idol who’d stolen my wife’s attention away from me? I was a wee bit bored, after all, so I endeavored to find out. Perhaps he’d have a scurrilous ancestry filled with rakes and other assorted rogues to make me feel better about myself and the damsels succumbing to his charms. Perhaps there’d be a Mayflower line in the mix. Oh well, one can only hope, right?

A quick internet search helped reveal that his parents…

This season’s bachelor is a man by the name of Clayton Echard.[1] He’s reputed to be from a small town in Missouri and seems like a nice young man. A quick internet search helped reveal that his parents, Brian and Kelly Jo (Duff) Echard still live in Missouri, but are natives of the Buckeye State. From here, it wasn’t a huge leap to obtain the names of Clayton’s grandparents, largely doing so via his mother’s maiden name, a repetition of his paternal great-grandfather’s name, and online obituaries to fill in a rudimentary family tree. While not perfected or necessarily proven, my exploration has been an interesting foray into what may be some kind of ‘genealogical karma’ with regard to the young bachelor.

At first glance, I was immediately struck not so much by Clayton Echard’s solid American ancestry, but by his French Canadian lines. A good portion of Clayton’s mother’s family is Quebecois, leading me to wonder if there isn’t a distant connection to French royalty. (And indeed there may be one.) What I found is that this particular prince of the rose ceremony is descended from so many Filles du Roi that I simply stopped counting at five.[2] While time hasn’t allowed me to prove these out, it seems ironic that the princely Mr. Echard should be looking for love among a plethora of beautiful young women – while also being a descendant of so many  jeune filles sent by the king to look for love among his own ancestors. Genealogical karma or irony, you be the judge.

I have to admit I stumbled about a bit at this point. Clayton Echard’s American roots appeared to go both north and south with concentrations in New Jersey and North Carolina. It was there in New Jersey where I found Mr. Echard’s great-great-great-great-grandmother, Hannah (Randolph) Phillips.[3] Here things started to go from “karmically ironic” to “genealogically interesting.” (Pass me a rose, please.)

There is a good deal of informal information that the “Hannah Randolph”[4] who married Ezra Phillips is Mr. Echard’s ancestor.[5] If this holds true (as it appears to), the Phillipses’ great-granddaughter Grace Holt[6] went on to marry Ray Francis Echard.[7] These are “the bachelor” Clayton Echard’s great-grandparents. This gives anecdotal evidence that connects “the bachelor” Clayton to immigrant ancestor Edward Fitz Randolph, a gateway ancestor to European royalty. Could it be that our prince charming of the rose ceremony is also a princely descendant himself? I hope you’ll forgive my rudimentary attempts at a descendancy chart to explore this with. (Chris Child, where are you when I need you?) 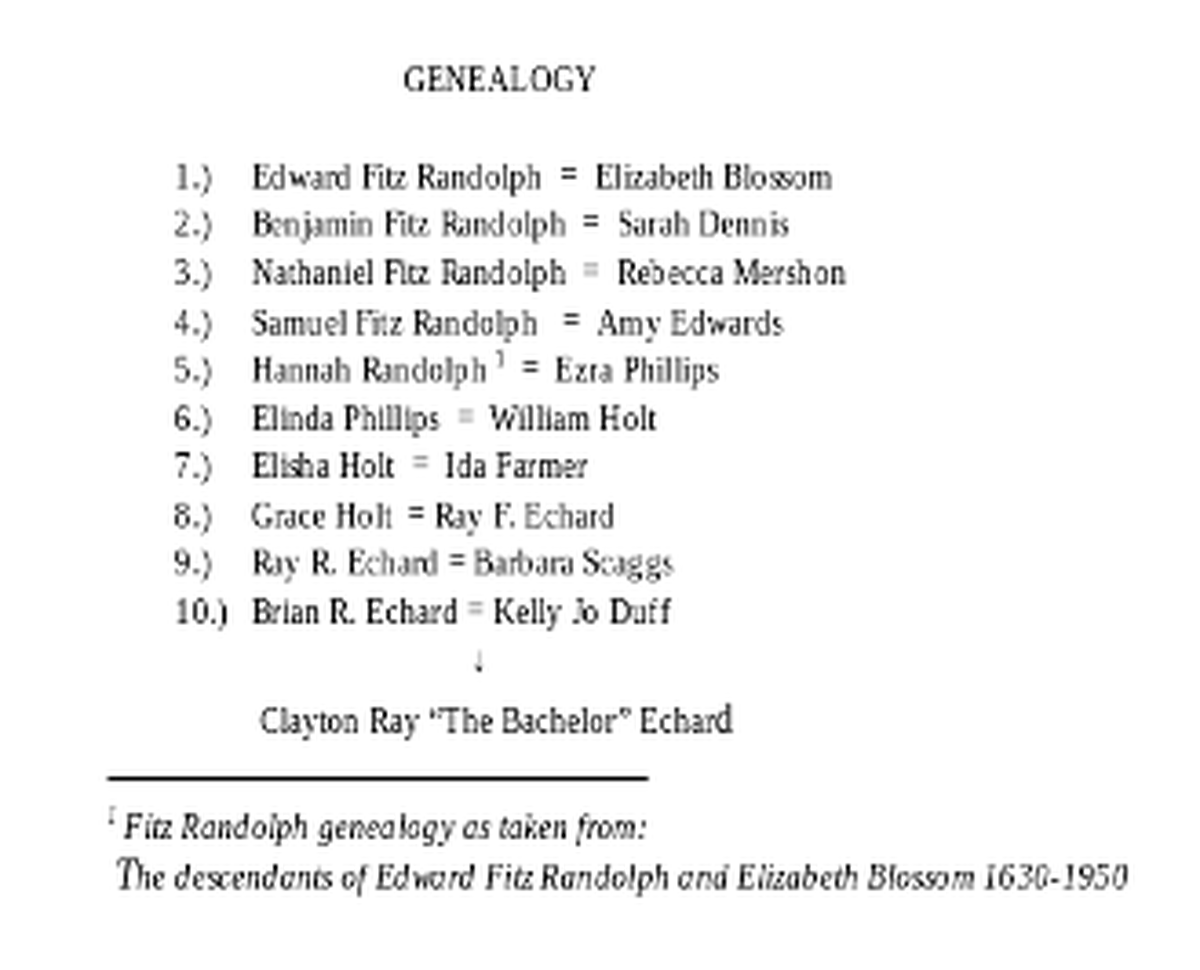 While all of this was mildly amusing, it was the virtuous name of Innocent Butts, a possible ancestor of Mr. Echard’s, that really caught my eye. Oh, the televised irony of it all! Yes, “Innocent Butts” was just who I’d been looking for. (No snickering yet please…) All virtuous kidding aside, I quickly realized that dear Innocent was the one who might supply the Mayflower connection I’d hoped to find when I started out on this marvelously un-televised journey in the first place. It seemed that ‘through’ Innocent Butts, a highly alleged great-great-great-great-great-great-grandmother of our bachelor protagonist Clayton Echard, there might just be the remotest possibility of a connection to Mayflower passenger Richard Warren, or, at least, a contested one.

By any account I could find, the mother of Innocent Butts was one Martha Church, but this is where it gets tricky. If “the theory” holds true, Innocent’s great-grandmother was Elizabeth (Warren) Church, the daughter of Richard Warren. Innocent Butts married Elisha Phillips[8] as her first husband, and, at least on the surface, “they appear” as if they could be the grandparents of Ezra Phillips – the man who married Hannah Randolph. Did you get all that? Heck, I knew you did. When I realized all of this the only thing I could possibly think to call it was: (and insert a slight snicker here) “The unresolved Mayflower ancestry of Innocent Butts and her descendants.” Heck, you just can’t make this stuff up!

“The unresolved Mayflower ancestry of Innocent Butts and her descendants”

Alas, I am sorry to say that the line from Innocent to the young Mr. Echard was a total bust. That rose had been grafted so many times that there wasn’t even a realistic possibility of connecting the young Mr. Echard to Innocent Butts, let alone connecting Innocent to Richard Warren of the Mayflower. I’m not even sure that such a faux lineage would have qualified the bachelor for membership in the General Society of Unproven Lineages. There was simply nothing there to prove. I’m thinking it may be time to go back to watching those marauding Saxons and Danes.

I know by now you’re thinking that I have an overly indulgent wife, and way too much genealogical research time on my hands. To this, I will only confess to the former. I will say that there has been some kind of poetic (or karmic?) justice in checking out some of the probable and improbable connections of this season’s princely bachelor Clayton Echard. I’ll admit he seems like a good guy with truly amazing ancestry.

I hope you won’t think too poorly of me, though, as you’ve waded through my somewhat puerile attempts at humor in trying to have some un-televised genealogical fun with it all. However, do be of good cheer! I’ve given the remote back to my wife and moved on from Saxons and Danes to an episode or two of American Pickers, just to get my bearings. Spending that much time with the Filles du Rois, an alleged gateway ancestor, and the elusive Miss Innocent Butts of unverifiable Mayflower fame just seems wrong. I hope you had as much fun as I did. (You don’t have to answer that!) Sadly, I don’t think I will be getting or giving a rose at this ceremony or any other any time soon.