At first glance, the terms alien and alias hardly seem applicable to my father’s beloved aunt, Mary Ellen (Cassidy) Clynes of Fall River (1890–1960). Her name, however, is listed among the National Archives Alien Case Files #10897934. This bewildering status only came to light in the spring of 1955, when Mary’s daughter Eleanor attempted to assist her mother in signing up to receive her first Social Security check. The city clerk said, “I am sorry, Mrs. Clynes, but you are not eligible for Social Security because you are not an American citizen.” What a puzzle for a woman born only a mile-or-so from the city center! It took months and a lawyer’s help to unravel the tangle.

Mary’s parents, Irish immigrants Patrick and Annie Cassidy, bought a lot from the Globe Mills in Fall River’s south end in 1887. They and Annie’s sister Ellen Flynn soon built a cottage at 13 Palmer Street, an easy walk to the mills. Here Mary was born on 1 May 1890. A family tragedy soon transformed Mary’s childhood, when her father died, age 29, following an industrial accident. Mary’s sister, Annie, was born on 11 May 1892, seven months after their father’s death. Their unmarried aunt, Ellen Flynn, supported the family by working in the Globe Mills while their mother Annie Cassidy kept house, with income from a hastily erected tenement with three cold-water flats on the back lot. Undoubtedly, Ellen paid for this studio picture of the Cassidy children. 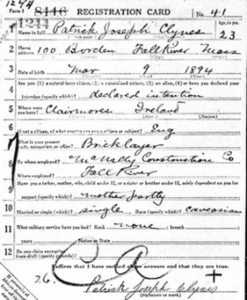 At 12, while her brother John continued his education, Mary joined her aunt Ellen in the mills. World War I influenced Mary’s life in an unexpected way: she married Irish-born bricklayer Patrick Clynes on 30 July 1917. A month before their wedding, Patrick registered for the draft, with his card revealing he had not yet become a naturalized United States citizen.

Only months into the marriage, with a child on the way, Patrick shipped off to France, perhaps with little heed to this law:

Following his wartime service, Patrick Clynes returned home to Palmer Street to wife Mary and daughter Eleanor, born while he was in France. What happened next remains murky—he left Fall River abruptly, never to see his wife Mary or his daughter again. It took Mary more than 35 years to learn her marriage to an alien cost her her citizenship. She never spoke of her husband’s abandonment.

In the meantime, with support from her sister, Anne, now a nurse, Mary Clynes kept house, sometimes cooked for other families, and raised her daughter Eleanor. When Eleanor started school, Mary went back to the mills. They moved out of the cottage and into the first-floor apartment on the back lot when Anne married in 1929. Until her death, Mary never changed her status as married. She remained the bedrock of the family’s stability. My life overlapped with that of Aunt Mary for only a year, and how I wish she lived into the realm of my memories. I too spent my preschool years in the house on Palmer Street.

Now to the alias: Patrick Clynes leaves a trail of mysteries. Born in County Mayo, Ireland, on 9 March 1894, as Patrick Mulkeen, eldest of nine children, he emigrated to New York in October 1915 as Patrick Joseph Clynes—his sponsor, an uncle named Patrick Clynes, formerly Mulkeen. An explanation, offered by one of Patrick’s many nephews, suggests the name Clynes sounded less Irish than Mulkeen. Within months of landing, Patrick made a declaration for naturalization but never followed through with final papers. 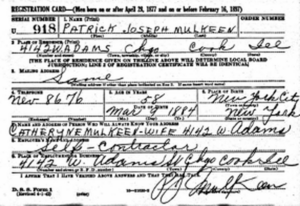 After quitting Fall River, Patrick settled in Chicago, resumed his identity as Patrick “Joe” Mulkeen, acquired a new wife, and prospered in the construction business. No children were born to this new union. Further compounding the duplicity, Patrick Mulkeen now claimed 9 March 1884 as his birthdate, thus aging by ten years. He stated New York as his birthplace, thus solving the citizenship problem! His World War II registration card reflects these altered facts.

In the end, all these attempts to obviate his life with Mary in Fall River dissolved upon his death in January 1963: He left his entire estate to his only daughter Eleanor, who, in turn, had no desire to meet newfound relatives in Chicago.

19 thoughts on “An alien and an alias”