Rhetorical question for persistent (obsessive!) genealogists: how long do we persevere in attempting to solve a mystery? This case study illustrates the complexity of French-Canadian surname variants, the imprecision with which people reported their ages and birthplaces, as well the difficulty in tracking migrant farm families who moved frequently.

“Mercy Mercury” smoldered in my unfinished file for almost 20 years. Finding her parents did not seem imperative because she was the wife of my nephew-by-marriage’s great-great-uncle Alexander Mercure (1855–1936) — yet my inability to solve the puzzle nagged at me. So, as a new year began, I laid out the pieces of the puzzle, one more time. That started with this entry from the 1880 census of Altona, Clinton County, New York:

Marcelline Mercry, age 28, born Vermont, wife of Alexander Mercry,[1] like her husband, could neither read nor write. No marriage record has been found for this couple. A baptismal record in 1882 of their daughter, Edel Malvina (“Mina”), revealed Marcelline’s maiden name, Hébert. Mina’s 1899 marriage record to Burton Bracey listed her mother as “Mary Abor” — Abair and Abare among common phonetic renderings of “Hébert,” wherein the H is silent in French. By 1900, having moved from Altona to Vermont, Alexander and Marceline were recorded in the census of Bolton, Vermont:

Murcy Mercury’s birth date written as April 1852 in New York, not Vermont. She and “Allec” seemed to elude the 1910 census, but in 1920, they were once again recorded in Bolton:

Here “Mercier Murkury,” age 74 [approximating a birth year of 1846], birthplace, Vermont, managed to gain an additional six years. If she stayed in Vermont, Mercy’s death certificate might have disclosed the names of her parents, but she died in Brome, Québec, on 7 December 1921, at the home of her daughter. The burial record from the Anglican church for “Mercy Hebert,” wife of Alexander Mercury, offered no information on birthplace or parents. A stone in St. John’s Cemetery, Brome, bears the inscription “Alic A. Murcury [no dates], His Wife/ Mercy Hibbard/ Born Apr 6 1849/ Died Dec 7 1921.”[2]

Searching among dozens of Hebert/Abare families in New York and Vermont, including published Catholic baptismal repertoires from 1850 to 1870, just did not seem to turn up the right family. Ultimately, the best clue emerged from a “Bolton” news column in the Burlington Free Press for 23 March 1921: “Charles Abare, who has been lumbering in Monkton [Vermont], is visiting his sister, Mrs. Mercy Mercury.” Scouring the 1920 census for all Charles Abare/Abair/Héberts born in Vermont or New York within two decades of the Civil War at last led to a viable hypothesis.

Charles Abare of Monkton proved to be the same as Charley Hibbard who died in Bristol, Vermont, in 1946, age 78; birthplace Grand Isle, Vermont; father’s name Stephen Hibbard, mother’s name unknown. A twenty-year gap between Charles’s birth year, 1868, and that of his supposed sister Mercy/Marcelline, circa 1848, still left room for doubt. In 1870, the household of Stephen Abare, age 43, wife Alice, 39, in Chazy, New York, had a long list of children, ending with Charles, age 2, but no Mercy or Marcelline. A decade earlier, the same family lived in Alburg, Vermont, and this time, Marcelline, age 12, was counted in the enumeration:

Mystery almost solved, but not entirely. Vermont-born Marcelline Hébert had her baptism recorded in Iberville, Québec, about 25 miles from the Vermont border. Her baptismal registration in St. Athanase-de-Bleury Church on 11 September 1848 clearly states she was born on 6 April in the state of Vermont, the daughter of Etienne Hébert [Stephen Abare], day laborer. and Leocadie Bomardier: 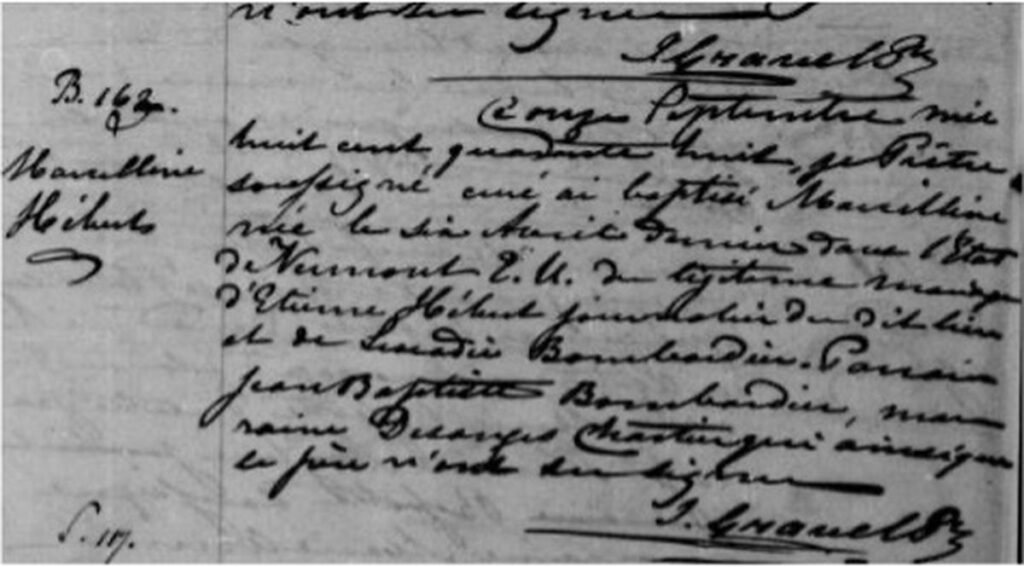 Marcelline’s mother died when she was three, and her father soon married Edesse [Alice] Bombardier, mother of Charles. They indeed shared the same father. What a tangle various online trees have made in confusing two different mothers, both with the Bom[b]ardier surname!

For all the years of puzzlement, I now bask in one of those Eureka! moments relished by researchers who just will not give up.

20 thoughts on “The search for Mercy”