“In the vain laughter of folly wisdom hears half its applause.” ~ George Eliot

From the days of hungry lions in the Colosseum to Keeping up with the Kardashians, the world of entertainment has always been a curious mix. In historical terms, and carrying over into genealogical ones, what constitutes “entertainment” isn’t always an easy place to re-visit or understand. It can be difficult to research persons, places, or anything of a ‘Thespian nature’ (sans those lions) without using modern-day judgments or, at the very least, a ‘present tense lens.’ One could say that the evolution of civilization demands this, that the value in what’s found to be ‘entertaining’ must also evolve. It could also be said that it’s much easier to stand on a moral high ground when looking backward. The implication here is that what’s moral in entertainment isn’t always static, but something that must necessarily change and improve. While I guess there isn’t any way that this can’t be true, at this juncture, the outcomes of such future changes and/or musings must be left to persons far better and wiser than I.

The members of my extended Clark family have always been an “entertaining lot.” Indeed, music and the field of entertainment seems to have permeated their very chemistry for centuries now. From my great-great-great-great-grandfather Aaron Merritt Clark,[1] an intrepid Civil War-era century music teacher, to Billy Wilcox,[2] the ne’er-do-well grandson who played tunes to the Old West’s saloons, to Aaron Clark’s descendant, actor/producer Larry Wilcox, this branch of the family has regularly risen to the challenge of picking up a note or delivering a proper line or two. This sort of talent (while perhaps not as notable as in other families) hasn’t only been an attribute of the men in the family. Even my sweet Aunt Jerralyn, an expert “quilter” if you will (and a Clark descendant), can play any instrument she puts her mind to. Have I mentioned how those particular talents have completely passed me by? Well, never mind.

Learning that my ancestor Aaron Merritt Clark was a Civil War-era music teacher was serendipitous.[3] I guess I’d expected the usual sort of military service in looking at his life and career. Not that there’s anything ordinary about “the usual” finds in military research, only that it’s rare for me to discover a musician in my own ‘rosters.’ The truth is that my ancestor’s occupation made me feel quite happy. I don’t know what sort of music teacher old Grandpa Aaron was. By the look of him he may have been a stern schoolmaster filled with ‘no-nonsense’ Victorian ways, but perhaps he was a happy-go-lucky sort of spirit who simply found his passions with more serious ‘harmony’ than most. Perhaps he was a bit of a jackass. (There are some rumors he may have been a philandering bigamist…[4]) 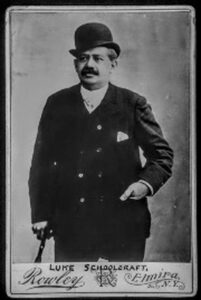 In any event, I was pleased to find him. Somehow, the idea of music in my family tree made a few of those branches “sing out,” and look a wee bit better. It was exciting to track his lyrical (?) ways as he moved west from Massachusetts to Wisconsin, Iowa, and to “Union” Missouri, with him surviving the War of 1812, the War with Mexico, and the Civil War, then returning home to New England for the final chapters of his life. Here I found a retired and elderly Aaron living with his daughters Lizzie and Margaret in Cambridge in the 1880 census. Living, too, with his son-in-law, the “head of household,” a man by the name of Luke Schoolcraft (1847-1893). Luke Schoolcraft, who listed his occupation as a singer. A retired music teacher living with a singer? How cool is that? Well, not so much… 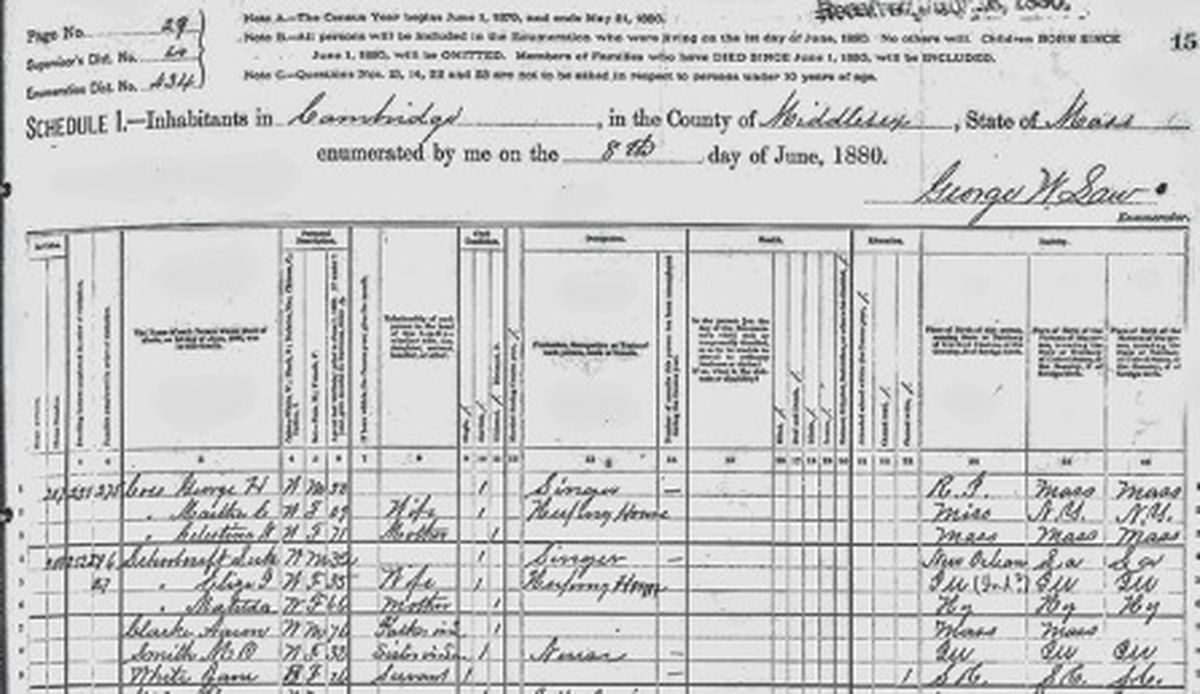 Now, I have no high expectations when it comes to my family tree. I admit that I’ve become familiar with the cringing feeling that overcomes me when I encounter any ancestor engaged in the enslavement of others. Fortunately, by and large, I am a Yankee. I feel blessed not to have “to battle” a lot of roots other than these stubborn ones. If by stating this I’m somehow trying to assuage my ancestral guilt, I sincerely apologize. You see, sadly, I’ve found that my ancestral baggage contains more than the usual standard bearers of bunk plantation mentality. Little did I realize that in following the life of my ‘musical’ great-great-great-great-grandfather Aaron Merritt Clark I’d stumble upon “The Great Minstrel,” my great-great-great-great-uncle by marriage, Luke Schoolcraft. At first glance, I truly had no idea of who (or what) I was looking at. After all, who the Hell was Luke Schoolcraft?

Born in Louisiana in the late 1840s to Henry Schoolcraft and Matilda Fontaine, Luke’s name is now fairly well lost to oblivion. Luke’s father Henry[5] was a seasoned character actor, and his mother, Matilda, was a “great beauty” with ties to the Taylors of Virginia.[6] Luke learned his theatrical trade early on, when he appeared on stage as a child with his father, and from there rapidly grew in reputation as one of the most inimitable “negro delineators.”[7] Thankfully and regrettably, the term “negro delineator” was one I had to look up. (I’m unsure if my ignorance of such terms is a valid excuse for needing to do so; however, if you’ve ever met me you’d understand that I am generally ignorant about a great many things.)  Schoolcraft’s mimicry or minstrelsy didn’t stop there, but extended to other races and nationalities as well.[8] It begs the question, Why is that funny? In any event, at the time of his death, “Uncle Luke ” is said to have been “the most famous minstrel comedian in America.”[9] At this point, as I try to underscore the chagrin seeping off the pixels of those old census pages, I hope you will allow me to refer you back to the “last line of paragraph one” of this post. At this moment, sadly, it may be the best I can do.

What I am going to do, though, is to attempt to look at “the whole of Luke”…

Now, if you expect me to paint a malevolent picture of “Uncle Luke” right about now, you’re no doubt reading the wrong blog post. Please don’t get me wrong; I certainly have no intention of painting some  nineteenth-century “anti-hero” of any sort, or attempting to excuse any aspect of Luke’s ‘profession.’ What I am going to do, though, is to attempt to look at “the whole of Luke,” and not just the flashy bigoted self-appropriations of the nineteenth-century “burnt-cork” showman we only see now with that “present-day lens.” Luke Schoolcraft, like all of us, was a combination of many things. The man I discovered appears to have been a lot more than a song and dance man. The Luke Schoolcraft I have found looks to have had a big heart and been a devoted friend. Oddly enough, he was considered a “warm friend” and was an apparent confidant to The Boston Strong Boy, a guy by the name of John L. Sullivan.[10] Talk about “opposites attract.” Go figure. So just who are you, Luke Schoolcraft?

It’s difficult for me to tell. Now, I know next to nothing about John L. Sullivan. I’ve read that he may have had a bit of a problem with ‘the bottle,’ and to be sure was likely an out-and-out racist.[11] It’s true, too, that men are often judged by the company they keep, so the “Schoolcraft and Sullivan” friendship is suspect at best. However, Mr. Schoolcraft is also described elsewhere as a man “Who won friendship wherever he went.”[12] (And, yes, this may mean that they were friends who looked “like him.”) Still, this was the same Luke Schoolcraft who “housed” his elderly father-in-law, Aaron Merritt Clark (that itinerant and allegedly bigamous musician mentioned above); his wife’s widowed sister; his wife (of course); and his widowed mother all under one roof in Cambridge, Massachusetts. Family relations be damned, he could have easily told the in-laws to stay elsewhere. (His father-in-law Aaron had six living adult children in 1880.) What begins to appear is, well, not a demon but, in a nutshell, a “human being.” He was also a man of considerable (albeit tasteless, in our estimation) theatrical talent. Now, I understand that any remembrance can be a flowery exposé of a decedent’s life, but consider the “other side” of Luke Schoolcraft as he was described in this unsourced quote:

Personally, Schoolcraft was a highly educated man, a lover of the good and beautiful, and the most modest and retiring man for one so prominent in his profession I ever met. He was devoted to his invalid wife and ‘from having known the hand of affliction,’ was ever ready to sympathize with a fellow-man in distress, and was never known to fail to respond to charity’s appeal. These traits made him generally beloved by all who knew him. The world may never again see his equal. He was the greatest impersonator the stage has ever produced.” ~ J. W. Campbell, Acting Manager, 14 March 1893

I guess the evolving truth of the matter is that Luke Schoolcraft was a ‘mixed bag.’ I am certainly not excusing any part of him. We are all a combination of ignorance and bias, of cruelty, talent, love, and compassion, and we are all very much people of our time. The crux of the matter is why was it ever (is or was) fashionable or ‘okay’ to make fun of others for entertainment purposes? Strangely, this may be something we haven’t completely outgrown. (Cue late-night television.) Indeed, is it an inextricable part of human nature to always rib the weak, “the different,” or that with which we disagree or do not understand? How sad is that? These attributes were a large part of the person Luke Schoolcraft was; a man who learned at an early age to profit from debasing others in his own self-aggrandizement. Did Luke know what he was doing? Probably. Did Luke enact the mannerisms or eccentricities of those less fortunate than him out of some corroded or hateful place in his soul? Probably not.

In this case, I must channel some famous entertainer or celebrity on Finding Your Roots. I can hear Henry Louis Gates asking his question: “How do you feel now, knowing…”  Sadly, I can only offer that I didn’t know the man. So just who was Luke Schoolcraft then? To me, Luke “is” you, and Luke “is” me. Rest in peace, Uncle. May we learn from your ‘acts’ what the whole of a person is, and indeed, how not to be so very far outside the lines.

[7] Per The New York Clipper, 25 December 1915, 43 (https://footlightnotes.wordpress.com/tag/negro-delineator/): “Luke Schoolcraft … was inimitable as a negro delineator. We have never seen his equal, nor is it likely we ever shall.”

4 thoughts on “Outside the lines”