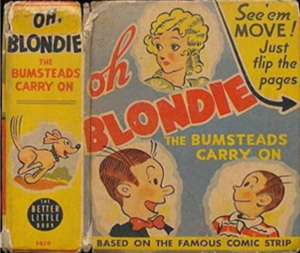 Sometimes the better part of a genealogical journey is exploring threads linking to the simplest of distant memories. Most ‘normal’ folks might call this going down the rabbit hole, and in this regard they’d no doubt be correct. Nevertheless, there’s a great deal of satisfaction in revisiting the thoughts and images that float through our family consciousness-at-large. These are the memories and images that often remind us of just who we are and where we’ve come from.

My adventure in genealogical memory exploration began this time via a long-ago conversation with mom regarding (of all things!) Dagwood Bumstead. Mom always got such a wry look on her face when the subject of Dagwood and Blondie came up. It was one of those ‘cat that ate the canary’ sort of looks (a look mom was naturally given to anyway), and one that seemed to me (at the time) quite out of place. Fast forward the timeline to the present day. Little did I know that “mom and the Bumsteads” would be taking me out onto the comic strip highway and, by way of this, further down the genealogical road to a fellow by the name of Major Nathan Clark.[1]

My “Bumstead journey” started out the usual way: that is, by examining Dagwood’s ‘family tree,’ or rather that of Arthur Lake,[2] the actor who portrayed him, and that of his wife, actress and socialite Patricia (Van Cleve) Lake.[3] My interest was kindled when Mrs. Lake’s lines quickly led me to an ancestor of her presumed father, a man by the name of George Van Cleve.[4] From there, it was only two short generations back from old George that I encountered Major Clark. Major Nathan Clark was a soldier instrumental in establishing one of the first forts in what was then known as the “Northwest.” Nowadays, we just call that area of the country Minnesota.

Did mom know something about “those Bumsteads” she wasn’t telling?

The surname “Clark” is, for me, an old family name and always catches my eye, so I decided to take a deeper look. However, as I started to delve into this branch of Clark ancestry, I began to have more questions about Major Nathan Clark than I was able to answer. It became less clear to me which Nathan Clark “mom and Dagwood” had led me to in the first place. Did mom know something about “those Bumsteads” she wasn’t telling? Cue that rabbit hole now, please.

As an existential sort of genealogist, I believe that some of the knowledge we have of our family history is innate. Yes, I know this notion is unprovable, though I don’t think there are any of us here who haven’t mused over our ‘greater unknown’ genealogical connections. Now, don’t get me wrong: My mother (obviously) never knew Dagwood, or ever had any interactions with the actor Arthur Lake or his wife and the occasional Blondie Patricia Van Cleve. However, I do wonder about the possibility of mom’s “innate” connection to an ‘untold family history’ that lay just behind mom’s smile. Somehow, it was a smile that said that any stories about this “Bumstead business” might be a little closer to home than one might otherwise have suspected. Somehow mom’s smile has proven all too coincidentally close to Dagwood, Blondie, and, yes, to my new genealogical nemesis, Major Clark.

The answer to all of this lay of course in my mother’s connection to Major Nathan Clark, to my imaginary “Bumstead ancestry,” and in mom’s rather circuitous connection to actor Arthur Lake’s wife Patricia (Van Cleve) Lake. (Got all that? I knew you would…) Interestingly enough (and in addition to this), while the intricacies of Mrs. Lake’s parentage aren’t really the subject here, suffice it to say that she having been identified as the purported love child of publishing magnate William Randolph Hearst and actress Marion Davies gives the story an additional twist on that genealogical and comic highway. (Why was mom so intent on visiting Hearst Castle?) No, what’s germane here is that Patricia (Van Cleve) Lake was never a “Van Cleve” at all, but was said to have been adopted and raised by her mother Marion Davies’ sister Rosemary, and Rosemary’s husband, a guy named (you guessed it) George Van Cleve. And, yes, mother, now you can cue that wry smile in that all roads from here will lead back to the parents of Major Nathan Clark and your own great-great-great-great-grandparents. See what I mean about all that innate family history? Wait a minute here, though. Which Nathan Clark are we talking about, exactly? 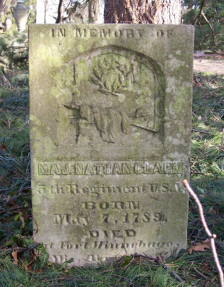 Discovering that I was somehow indirectly connected by circumstance to the Bumsteads of comic book and other assorted media fame through “some guy” named Major Nathan Clark was no big deal. However, as I began to dig a little bit more I started to doubt the validity of my own claim. You see, my research was coming up with either two men named ‘Nathan Clark’ or two sets of differing facts for one, with both sets of facts showing his parents as John Clark and Relief (Barnum) Clark. Both of these “Nathan Clark”s were born in 1780s Massachusetts. Published biographies stated that “Major Nathan Clark” was born 7 May 1789 “outside of Worcester, Mass.”[5] The published birth records for “Nathan Clark” as the son of John Clark and Relief Barnum appeared to show him born as early as 7 May 1783 and in Franklin Township in Norfolk County, Mass.[6] Published biographies also state that “Major Nathan Clark married Charlotte Seymour.”[7] However, some family trees reflect that “Nathan Clark, son of John Clark and Relief (Barnum) Clark,” had married a woman named Nancy Payson.[8] Were they the same guy? Did Nathan Clark have two wives? On the surface, that did not appear to be the case. Drat! I could feel myself falling into that vast genealogical wasteland known as “without proof.” Come on, Jeff, get it together.

Was I falling victim to a genealogical Omicron[9] that strikes at the heart of us all? Had I rashly ignored the mandates against copy-and-paste? A look at the list of “Nathan Clarks” born in Franklin Township and/or Worcester County, Massachusetts in the 1780s did little to assuage this feeling or verify the line. Various sorts of records for “Nathan Clark” born in Franklin Township ranged in script from a simple “1780” in one record to as late as May 1789 on Major Clark’s headstone.[10] All these “Nathan Clarks” presumed his parents to be John Clark and Relief (Barnum) Clark. So how could I be sure that I had the right Nathan Clark? I needed to start from scratch and to stop making genealogical assumptions. I needed to start organizing my facts if I was ever going to figure this “Bumstead connection” out. 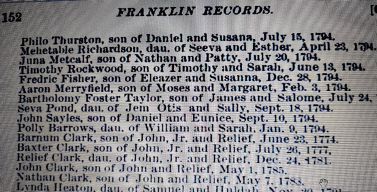 John and Relief are also my own direct ancestors through their son (and Major Clark’s brother), John Clark Jr.[11] It naturally followed that if Mrs. Lake’s adopted father George and my mother shared the direct line of Clark ancestry, then Nathan Clark should have a brother or sister from whom I descend and from whom I might be able to trace both of our mutual descents from their parents John and Relief (Barnum) Clark.

The genealogies I looked at indicated that Van Cleve’s ancestor Nathan Clark married Charlotte Seymour. Yet in looking at the family of George Van Cleve and his connection to Major Nathan Clark, born 7 May 1783-89 at Franklin, I found it hard to believe that I had any legitimate connection to the Van Cleves (and hence to the Bumsteads and Hearst Castle!) through Major Clark. I assumed that any connection I thought I was finding in those copy-and-paste family trees was necessarily wrong. I was (and still am) having trouble reconciling a Franklin Township birth record for 7 May 1783 with a published statement of Major Clark’s birth as having been “outside Worcester, Massachusetts” on 7 May 1788 (or 1789). My thinking was that “my” Nathan Clark could only be “the other guy,” the one who married Nancy Payson. Surely my ‘true’ connection had to be to that obscure farmer from Norfolk County and not the “Major Nathan Clark” of Fort Winnebago repute. Alas, I figured that there would never be any free admittance tour of San Simeon down the road for me and mom.

Yet assuming I was wrong was also a huge genealogical mistake. The further I looked, I could see that the family trees that listed Nathan Clark who married Nancy Payson and as “the son of John Clark and Relief (Barnum) Clark” were the very ones that lacked any proof. Yes, I could see why they had linked their Nathan Clark to John and Relief (Barnum) Clark (they’d done so off a single death record for a Nathan Clark born at Franklin in 1780[12]) but had nothing else to substantiate their claim. The further I looked at the transcribed records, the closer I got to accepting the depictions of Major Nathan Clark (and that of my own ancestor, his brother John Clark, Jr.) as found in the Patten genealogy.[13] The Patten genealogy is a contemporary work that carries my own Clark lines down to my great-great-great-grandmother, Eveline (Clark) Wilcox.[14] Apparently, the rumors in the old comic strip were true. It appears that I just might be a shirttail relative of Dagwood and Blondie Bumstead after all. (Wink!)

So the moral to the story (if there is one) is to not always assume that you are wrong in what might otherwise be your ‘hypotheticals’ or working genealogical assumptions. (And yes, I know we are not supposed to make assumptions, genealogical or otherwise…) It would also be wise (at least in my case) to brush up on the correct source material for Massachusetts genealogy, such as can readily be found at NEHGS. Truth be told, though, is that all of this and a nickel still probably won’t get you into Hearst Castle. However, like mom did way back when, you just gotta smile about it all because somewhere along the way you felt that old genealogical truth in your bones whether you knew it or not. In the end, you just might be the only one who ever knows what truly happened.

[9] For future readers: the Omicron variant of the 2019 coronavirus.