Making a beeline for the waterfront, sparkling on that clear, crisp afternoon, I wanted to pay another visit to the Pilgrim Mother, a memorial fountain cut from Knoxville marble and given to the town by the DAR in 1920 in recognition of the tenacity, resilience, and hopefulness of the Mayflower women. Having undergone a thorough cleaning and restoration – and found to be in excellent condition given its age – the plan was to rededicate the statue last year but, instead, the ceremony was delayed until 2021. Not to worry. It went off without a hitch this year. In an ongoing effort to enhance the waterfront experience, information panels about the fountain, its sculptor, and the DAR are being prepared for future installation.

Across the street from Pilgrim Mother stands a handsome statue of William Bradford, governor and historian of the Plymouth Colony. Attentive, sober, and confident, he is depicted as the man of leadership who had taken charge of the Colony upon the death of John Carver during the first winter. The Bradford statue, commissioned in 1920 as a legacy project for the two-year tercentenary and modeled in plaster by Cyrus E. Dallin (1861-1944) – whose other notable works include statues of Paul Revere and Anne Hutchinson, the bas relief of the Signing of the Mayflower Compact (Provincetown) and Appeal to the Great Spirit (Museum of Fine Arts, Boston) – was not enlarged and cast until 1976, America’s bicentennial year. By then, the imposing statue of Wampanoag sachem Massasoit, also designed by Dallin and dedicated in 1921, had stood atop Cole’s Hill for more than fifty years. It has not been lost on visitors to Plymouth that, positioned as the statues are, the eyes of the two men, who shared personal and political bonds that framed the Pilgrim experience for the first half century, do not seem to meet.

Attentive, sober, and confident, he is depicted as the man of leadership who had taken charge of the Colony upon the death of John Carver…

From the bottom of Leyden Street, I could see that the doors of the Mayflower Meetinghouse in Town Square were flung open for what appeared to be public tours. Excitedly, we made our way up the hill. Last year, during the months of lockdown, I had admired the church, the fifth spiritual structure on the site dating back to 1621, but only from the outside, disappointed to have never had the opportunity to see the restoration work on the Tiffany windows and Arts & Crafts interior.

Several years ago, when the First Parish congregation determined that it could no longer maintain the Norman-style 1897 church, listed on the National Register of Historic Places in 2014, parishioners donated it to the Mayflower Society with the requirement that funds be raised to restore and permanently maintain it. The call to “Save the Meetinghouse” was sounded near and far and Mayflower descendants and member societies generously answered that call, guaranteeing that the church will continue as a lasting legacy to the civic and religious freedoms – the country’s purpose – planted by the Pilgrims. Restoration work on the church is ongoing and will eventually include an interactive, multi-media museum experience for visitors. In the meantime, in the quiet of the sanctuary, there is much with which to interact. 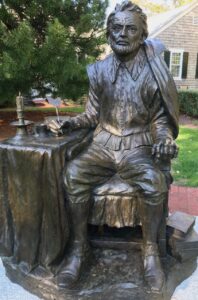 My last stop was a return to the garden of the Mayflower Society where a few late blooms were struggling to hang on as cooler nights prevailed. At the back of the garden is a new statue of Governor William Bradford, commissioned from sculptor Dee Clements, a Mayflower descendant, as a 2020 legacy project and installed in June 2021. Separated by a century, it is a very different “take” on the governor than the Dallin statue at the waterfront. In the garden he is seated, and in a contemplative, reflective pose. He is older and appears weary, even melancholy.

The face of Bradford is said to be a composite of faces of living Bradford descendants. With quill in hand and writing by candlelight, Bradford is depicted not as the colony’s living leader, a man of purpose, elected thirty times as governor, but as its memory, writing the colony’s history – Of Plimoth Plantation – for posterity. He began compiling his manuscript in 1630, ten years after arriving at Plimoth, continuing to add to his chronicle until 1650. Seven years later he died at the age of sixty-seven.

Bradford’s cherished original, which has had its own remarkable history of being lost, later found in England, and repatriated to Massachusetts in 1897 (interestingly, the same year as the founding of the Mayflower Society and the completion of the meetinghouse in Town Square), now resides in the Special Collections Department of the Massachusetts State Library. It has been reproduced in several new editions to commemorate the Mayflower quadricentennial. 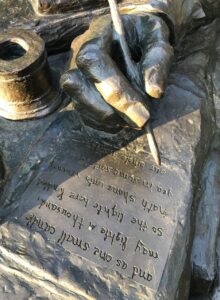 Into his design, the sculptor of the new Bradford statue chose to incorporate one of the most recognizable passages from Bradford’s history, what many refer to as the inspirational “one small candle” passage, Bradford’s recollection of the optimism felt in 1630 with the arrival of Massachusetts Bay colonists whose own candle had been kindled by the pioneering Pilgrims:

Thus out of small beginnings greater things have been produced by His hand that made all things of nothing, and gives being to all things that are; and, as one small candle may light a thousand, so the light here kindled hath shone unto many, yea in some sort to our whole nation.

By the time Bradford wrote those words in the 1640s, he recognized that the Great Migration of thousands of Puritans had been a mixed blessing, that while John Winthrop’s enterprising Puritans had indeed spread the word of God, new economic and intellectual opportunities were undermining and beginning to dissolve the bonds of Pilgrim community identity. Bradford understood that the beginning of something is the end of something else and, though he lamented the changes taking place, “one small candle” expressed his confidence that God’s purpose, for which the Pilgrims were chosen, had been fulfilled.

Strolling around Plymouth, one appreciates the town’s commitment to its history and the succession of anniversary projects that have, over the years, shone light on the Pilgrim legacy. And as this quadricentennial draws to a close, one can’t help but wonder what the quincentennial will bring, what will remain. One imagines eager visitors, walking in our footsteps as we walked this past year in footsteps one and two centuries old. What might be kindled by a small candle lit today? Will new scholarly research emerge that brings future generations even closer to the past, to those pious English settlers who knew they were Pilgrims? those Pilgrims, whom Samuel Eliot Morison rightfully called the “spiritual ancestors of all Americans.”