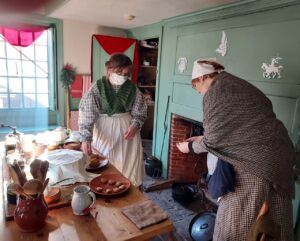 Like so many people during this season, I’ve been (slowly) decorating Our Old House for Christmas. As I arranged the mini-“Dickens Village” on the kitchen hearth today, I realized that it was more than a little anachronistic. This old Maine farmhouse, built in 1788/89 by American Patriots, would never have seen such a British or Victorian display of Christmas!

Indeed, I assume Our Old House builder, Asa Williams, a devout church-goer, would have spent Christmas Day in the meeting house (church) along with midwife Martha Ballard,[i] and then perhaps spent the evening with his family and friends (right after doing the evening chores, of course). This Fort Western Settlement was a small “community” in the late eighteenth century, so I can’t imagine a lighted Christmas Tree (candles or otherwise) in Haymarket Square, or inflatable Santas on lawns, or Fort Western decked out in tinsel. If I’m mixing time periods in my home, I wondered how my early-settlement community of Augusta was handling it this year.

Old Fort Western, a National Historic Landmark and the oldest wooden French and Indian War garrison in North America, today recognizes that it would not have sported Christmas decorations during its time as a military garrison, trading post, store, and Howard family home (1754-1850s). Instead, the historic interpreters there provide a view of a Victorian Christmas as it might have been during its tenement period (1850-1919) with popcorn stringing, story-telling, paper-cutting, making gingerbread, and bonfires where visitors can watch the City’s fireworks set off at the nearby boat landing.

[My] great-great-grandfather Charles Otis Cony was generally known as a Cranky Yankee, so even he had his place at Christmas: Grinch!

Whether it’s two hundred thirty-two years ago, one hundred eight years ago, or last weekend, the “current” Fort Western Settlement recognizes its various time periods in Christmas celebrations, just as we do in Our Old House.

It beats sitting on a hard wooden bench in an unheated meeting house all day!

2 thoughts on “A Christmas anachronism”