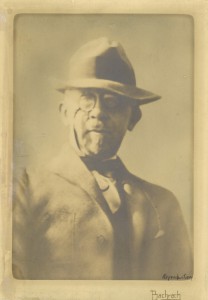 Several years ago, as part of an effort to find an image of my great-grandfather Edward Hughes Glidden (1873-1924), I set myself the goal of tracking down as many of his architectural commissions as I could. A relatively late convert to Facebook, I used my Facebook page and its album function to create miniature accounts of Glidden’s projects, with images and notes on the date of commission, any partners (he had several over the course of his career), and any notable owners or tenants of the resulting buildings. (Grandparents of family friends as well as the future Duchess of Windsor lived in Glidden’s Baltimore apartment buildings a century ago.)[1]

Glancing through Facebook recently, I noticed a Maryland School Context survey sponsored by the Maryland Historical Trust and Preservation Maryland. While the focus of the survey was schools built 1945-79, I took the opportunity to flag two Glidden and Friz[2] schools in Baltimore – one now closed, the other still in use – in hopes of drawing attention to my great-grandfather’s career.

The survey is pretty simple, with questions on the schools’ names, “architectural or historical value,” whether or not the school building is threatened, and where in Maryland it is located – both by street address, if possible, and by adding a pin to a map.

The first of the schools is (the former) Southern High School,[3] at the intersection of Warren Avenue and William Street in Baltimore’s Federal Hill neighborhood. The architects’ drawings were for a “modern 24-classroom building,” although the existing schoolhouse evidently remained in use next door during the construction process; the cost of the new school was set at $115,000.[4] The high school went through two major renovations before closing at this location in 1978.

A late Glidden and Friz commission comes from 1913. This one, the Commodore John Rodgers Elementary School on East Lafayette Street, is still in use. Hattie Fields Russell’s 1985 application for the school’s placement on the National Register of Historic Places credits the design to Clarence E. Stubbs, the city’s Inspector of Buildings, noting that the Rodgers School “borrow[s]” elements from Edward H. Glidden’s Southern High School [sic]. According to the city’s records, however, Glidden and Friz were paid the munificent sum of $350 for their work in 1912, suggesting that the Rodgers School’s likeness to Southern High was intentional.

Glidden and Friz had interesting and lengthy careers, and these two schools don’t begin to exhaust their versatility. Still, it is fascinating to focus on a smaller element of their oeuvre – and to visit, as I did in 2014, and see these buildings in their neighborhood context.

[3] Al Kaline is perhaps the school’s most famous graduate.