This tale began with a headline – “Fatally Stricken While in Bank” – in the Newport Daily News on 5 January 1965 that described the sudden demise of Anastasia Dwyer, age 76 [sic]. A reserved, quiet, unmarried woman, “Stacia” always came to family wakes and sat alone. My Newport Dwyer relatives, with roots in County Kerry, Ireland, assumed she belonged to our clan but did not know any details. Stacia’s death certificate presented the first of many puzzles, beginning with the names of her parents: father — Dwyer, Patrick later inserted, and mother Abbie Mahoney [sic]. Informant: Patrick Mack of Holbrook, Massachusetts. Who was he? It struck me as odd that none of the Newport Dwyers supplied that information. Stacia had lived with her mother, Abbie Dwyer, until the latter’s death in 1946. Abbie Dwyer’s death certificate indicated her maiden name was Sullivan, the names of her parents unknown. A death notice in the Newport Mercury offered no additional information, but her funeral notice disclosed Patrick Mack as one of her pallbearers.

An unfolding case study, published in two newsletters of The Irish Ancestral Association [TIARA], detailed the twists and turns that led to my genealogical conclusions based on circumstantial evidence.[1] Here are the facts:

Anastasia Dwyer was born and baptized in Willimantic, Connecticut, on 5 October 1886, daughter of Patrick Dwyer and Abbie Sullivan. Her parents married in Willimantic on 16 August 1881.[2] After Anastasia’s birth, they joined several other Irish-born Dwyer families who settled in Newport. In the early 1890s, however, Patrick Dwyer, disappeared, leaving Abbie to make her living as a washerwoman. Patrick’s parentage remains unlearned — and, thus, he inadvertently became the red herring in this saga because his wife, Abbie Sullivan, turned out to be the one with Dwyer ancestry.

In 1880, Abbie Sullivan, 26, lived in Willimantic, along with her mother, widow Abbie Sullivan, 55, and brother Cornelius, 22.[3] By tracing Cornelius back to County Kerry, I found that he was baptized in Caherdaniel on 26 June 1855, the son of Cornelius Sullivan and Gubnetta [Irish form of Abbie or Deborah] Dwyer, who married there on 24 February 1852.

Holding on to those facts, let’s now go to how Patrick Mack of Holbrook fit into the picture. He was born in Holbrook, Massachusetts, on 2 January 1886, son of Patrick Mack [Macgillicuddy] and Bridget Mahoney, who were married on 14 June 1871 in Cambridge, Massachusetts.  Bridget (Mahoney) Mack lived until 25 February 1927. Her death record named her parents as John Mahoney and Abbie Dwyer, matching up to Bridget’s baptismal record in Caherdaniel on 7 June 1845. Bridget’s parents Johanes Mahony and Gubnetta Dwyer were married there on 26 December 1836.

Comparing these marriages begged the question whether it was Gubnetta in both instances. Yes! Bridget (Mahoney) Mack and Abbie (Sullivan) Dwyer were half-sisters. Their mother, widow Abbie Sullivan, died in Holbrook on 9 April 1905, age “76,” father’s name, Michael Dwyer.[4] Her death notice from The Brockton Enterprise, issue of 10 April 1910, clinched the evidence:

“Mrs. Abbie Sullivan died yesterday morning at the home of her daughter, Mrs. Patrick Mack on Weston Street. Mrs. Sullivan was born in county Kerry, Ireland, and when quite young came to this country. She leaves three daughters and two sons.” [One of these sons, likely Cornelius Sullivan, has not been traced with certainty after the 1880 census]. Thus, it made sense that Patrick Mack would have served as a pallbearer for his aunt Abbie Dwyer and as the informant on the death certificate of his [half-] first cousin, Anastasia Dwyer.

New clues abound on the trail that started with Anastasia. At DNA matches among Dwyer descendants have contributed enormously to recognizing and reordering relationships among pre-Famine Irish families living next to one another. Consider, for example, this snip from Griffith’s Valuation, for Caherdaniel circa 1852. 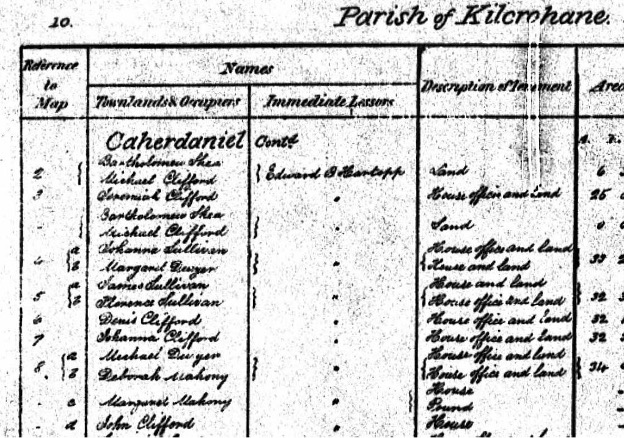 Michael Dwyer and Deborah [Abbie!] Mahony shared plot 8A and B. What was their relationship: brother and sister or father and daughter? Michael Dwyer, my ancestor, married in Caherdaniel on 26 February 1835, making him and Abbie contemporaries. Moreover, using the DNA matches of my father’s first cousin Charles P. Dwyer as well as my own to descendants of Abbie and John Mahony show a range from a high of 33 cMs in two segments, supporting the probability they were siblings. DNA evidence truly opens the door in mapping relationships absent from written records.

[2] Certificates of baptism and marriage obtained from St. Joseph’s Roman Catholic Church in Willimantic. Anastasia was the third of four children and the only one to survive into adulthood.

[4] Abbie’s age at death was off by about a dozen years, not an anomaly among Irish immigrants. See “Missing Years” at Vita Brevis.