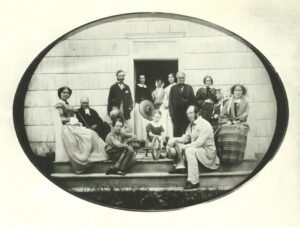 The very large family group photo at left was taken in Goshen, New York, in 1857. It shows the extended family of my great-great-grandparents, John Steward[1] and Catharine Elizabeth White, and includes Mrs. Steward’s mother, Harriet Le Roy White.[2] Mrs. White was born in 1797 and died in 1885; she is one of the earliest ancestors for whom I have an photograph. (It seems possible that her husband, Campbell Patrick White, born as long ago as 1787, is also shown in this group.) 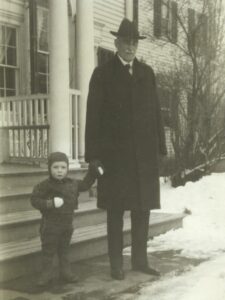 The Steward Homestead, in front of which the Stewards and Whites are posing, passed out of my great-great-grandfather’s hands during the 1870s.

My great-grandfather, Campbell Steward,[3] is the little boy at the center of the group. He was born in 1852, and lived into my father’s childhood. He is shown at right with my uncle — his grandson — in front of the house he built with my great-grandmother following their marriage in 1885. By 1930, the date at which my uncle was old enough to pose with his grandfather, this house — just up the road from the Homestead — had long been home to the Stewards’ five children and four grandchildren.[4] 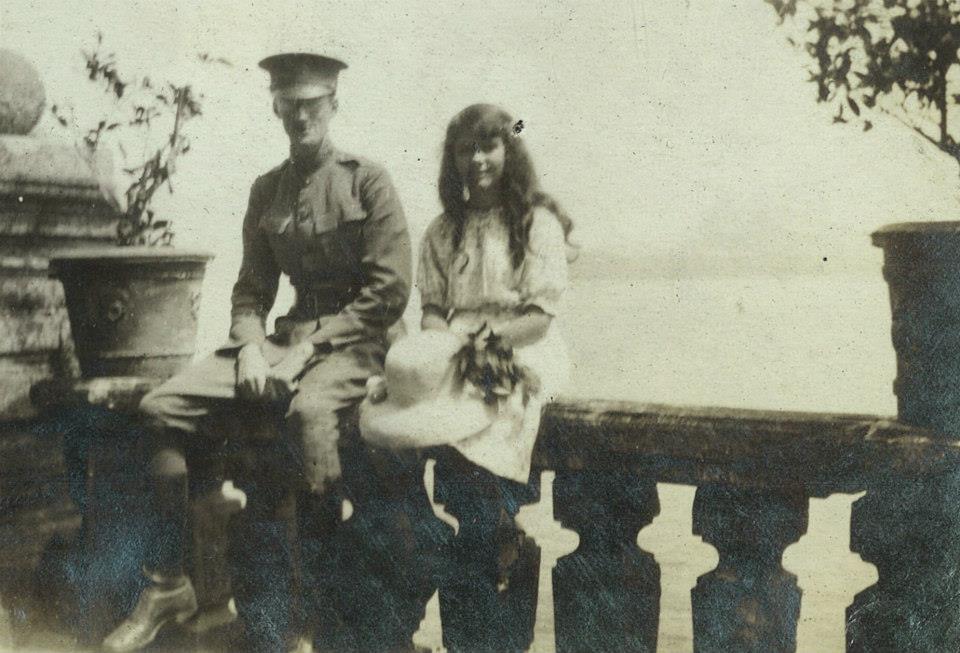 My grandfather, Gilbert Livingston Steward,[5] drove an ambulance in Italy during the First World War. He is shown here with a friend, identified in his album simply as “Ivy,” during a short leave in 1918. 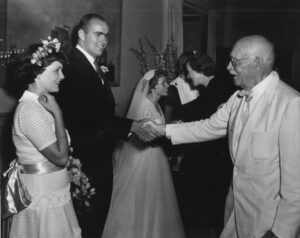 To close the circle, here is his eldest son and namesake, Gilbert Jr., greeting guests at his wedding reception in 1951. With his sister-in-law one one side, and his bride on the other, Uncle Gil is shaking hands with his maternal grandfather, Charles Fanning Ayer (1865-1956); my step-great-grandmother greets Aunt Sally.

Over the 94 year span of these photos, young Campbell grows up until in old age he is pictured with his grandson; twenty-odd years later, Gil is himself a married man. The family resemblances — perhaps best seen in other photos than these — are fascinating, but what these images do convey is at least five generations of the Steward and White families in momentary contact, on a summer day in 1857 or 1918, a snowy day in 1930, and a fine day for a June wedding in 1951!

[2] Harriet Banyer Le Roy was married to Campbell Patrick White 1816-59. Mrs. White sits next to her daughter Catharine Steward, in profile; her husband might be the man at left, with a white cravat, facing the camera. The other people in the photo are likely all of the Whites’ surviving children and Steward grandchildren, along with one servant in the doorway.

[4] Both the Steward Homestead and the Campbell Steward house were torn down during the 1960s.