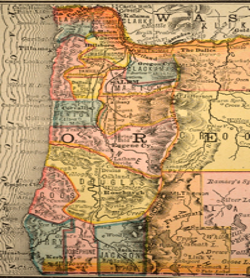 The landline rang unexpectedly last Friday. Its sudden clamor gave us all a bit of a jolt. A day or so before, I’d made the journey north to Oregon for a visit with my father and my once-upon-a-time “force to be reckoned with” step-mother. As the phone rang that day I remember thinking, Darn that noisy dialer, why are you disturbing us? I’d been just about ready to settle into the hush of yet another (the umpteenth) episode of Laramie on the TV.[1]

The ring of a landline is a curious thing. It has a serious trilling, rather than the ready-made tweet of a cell phone. Here in the Oregon Territory, where dad lives and cell service is sketchy, it (the landline) can be a lifesaver, too. However, that day this particular ring was something more. Suffice it to say, this time it was a time-honored “call to action,” insofar as Dad hurriedly clicked off his endless stream of vintage cowboy melodramas to answer the call. After all, old-school wisdom says you just never know when the Oregon State Lottery might call to say you’re the next Big Winner. (Right?)

In this instance though, at least for Dad, the ring of that landline was almost as good as any Super Lotto ticket. You see, dad was getting a call from his old friend Ralph. Now, Ralph’s been around a long time, and, no offense to Ralph, but when it comes to years on the planet, Ralph makes our almost-eighty-seven-year-old father look like a teenager. Ralph, a recent widower, was actually a long-time friend of my grandparents, who passed away decades ago. Nowadays, Ralph still likes to check in on Dad just to see if he is well and doing okay. Sweetly enough, Dad takes great pride in his connection to Ralph. It’s a friendship that’s been multi-generational, has lasted lifetimes, and really (forgive me here) “rings” true. (Wink!) 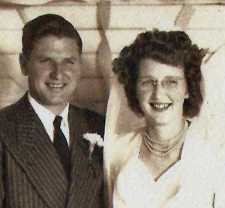 So I got to thinking about Ralph. I have to admit, I hadn’t paid much attention to this friend of my grandparents, who still calls to check on Dad and Mrs. Dad. As much as I could recall over the years, Ralph was a nice and friendly sort of guy. All the same, though, the fifteen-year-old kid that still lives inside of me had (regrettably) stopped paying much attention to friends of my grandparents years ago. This time, however, it felt different. That ringing landline had awakened my curiosity about Ralph. As I considered all those tethered branches connecting the many family lines with which we all come in contact, I wondered if there wasn’t something more underlying my family’s connection to Ralph. Could our families have some genealogical connection? Was there something lying just beneath the ancestral surface?

So, I thought I’d take a look at Ralph instead…

A quick look at Jean’s family tree proved that my working theory was going nowhere fast, as Jean’s immediate ancestry proved to be entirely of early twentieth-century Scandinavian immigrants. Beyond some random non-parental event, any ancestral connection to my grandparents appeared impossible. So, I thought I’d take a look at Ralph instead, and that’s where some of those convergent “lines” of friendship started to make a little more sense. (Not that any of this will explain why dad ran to the phone like he’d just won the Super Lotto, especially when it was nearly time for Wagon Train…)

With regard to Ralph’s father’s family there also were no clear-cut connections. However, I didn’t look very far into Ralph’s direct paternal lines. I didn’t need to. Something caught my eye much quicker. And while I will probably never be able to verify “it” all out, it was seeing Ralph’s mother’s maiden name, that of McGrew, that drew my attention. Much like ‘the trill’ of that landline, it was a curious thing. It was exactly the sort of connection I’d been hoping to find. You see, McGrew was a name with a connection to my Grandfather Record.

I need to back up here a bit and explain something. (Forgive me. I know I digress way too much, but you’ve already come so far…) You see, I rarely find any “connections in common” with my paternal grandfather H.J. Record. Oh, he has distant genetic cousins, of course, but no “party lines” to speak of (that I can find) that might “link” him to someone famous or for that matter even the guy next door. My other three grandparents host a myriad of relations, famous, not-so-famous, dim-witted, next-door-neighbor-like, and otherwise. (Those three also often prove to be related to each other. Ewww.) This however isn’t the case for my paternal grandfather. His direct Y-Chromosome ancestors lie anchored in the muddied silt of Chesapeake Bay and the Delaware River. There simply aren’t any easily discernible connections. And while this particular connection to Ralph comes through my grandfather’s mother’s lines, I am always grateful when I find “my grandpa” connecting to anyone at all. So, you see when I saw that my grandfather’s good friend Ralph’s mother’s maiden name was McGrew I knew I just might have a connection.

I admit I’m relying way too much on the anecdotal suppositions of someone else in relating all of this to you, however compelling it may be to me. Suffice it to say that “my great-grandmother’s great-grandmother” is stated to have been “Mrs. Mary Williams,” who in may very well have been Mrs. Mary McGrew Williams, who in turn was the mother of Julia Ann (Simmons) Harris, who was the mother of Sarah Jane (Harris) Burson, who was the mother of Gertrude (Burson) Record – my grandfather’s mother. While much of this connection is beyond picaresque, there is some fairly good evidence to support my grandfather’s connection to clan McGrew.

“Mrs. Mary Williams” is stated to be the second wife of John Simmons and is mentioned in the excerpt  from Graham’s work above. His first wife was Hannah McGrew and their marriage is well documented. While there is no record that the maiden name of his second wife was “McGrew,” they (that is, John Simmons and his second wife) named the first of six children “Alexander McGrew Simmons,” which was the name of his first wife (Hannah’s) father. In addition to this, John Simmons married as his third wife Mrs. Elizabeth Jackson – a lady also thought to have also been a McGrew sister or cousin. In any event (and if author Graham’s research and theories hold true), it appears that John Simmons may have married three women whose maiden name was McGrew and that three women are likely descended from the original Irish immigrants Robert McGrew and Isabella Finley, the very ancestors of our old family friend Ralph.

However, the story doesn’t end there. Recent DNA “links” from my dad to the McGrews have emerged via a young lady born a McGrew who is as close genetically as a fourth cousin. (Yes, I know that DNA connections may prove to be as random and fickle as the anecdotal evidence but, heck, it is so worth exploring!) Further, there’s an additional connection to my grandfather’s mother Gertrude (Burson) Record in Ralph’s tree. This connection is between John Cox and his wife Rachel of Kennett, Chester County, Pennsylvania.[2] The Cox family’s connection to my great-grandmother’s Burson family appears to be fairly well-documented. “Dinah Cox,” purportedly a granddaughter of John and Rachel Cox, married one Finley McGrew, son of James, grandson of Robert McGrew and Isabella (Finley?) McGrew, who are direct ancestors of, you guessed it, Ralph. All of this makes the possibility of this family friend being an ‘unbeknownst seventh cousin’ really quite possible and certainly quite fun.

So I guess the moral to this tale is never to ignore the ringing of your landline, that is if you still have one and if you are willing to give up some of your free time watching reruns of spaghetti westerns to ponder those tethered branches yet again. It could mean that the lottery officials have found you. It could mean that robocalls have finally caught up with you. Or, it could be an old family friend, who, with a little clearing off of the ancestral dust, might just turn out to be so much more.