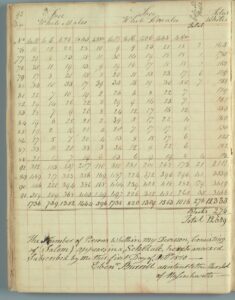 Two hundred eleven years ago today, on 6 August 1810, Assistant Marshal Ebenezer Burrell set out to make a full and accurate count of the residents of Salem, Massachusetts. He was instructed to make a formal inquiry at each dwelling house, or with the head of household, to count the number of free white males (under the age of 10, 1-15, 16-25, 26-44, and 45 years and older), free white females (under the age of 10, 1-15, 16-25, 26-44, and 45 years and older), and free persons of color (no gender or age designator) living at the residence. He was also told to make two copies of the enumeration, placing them both in two public places for verification. After the enumerations were confirmed, one of the copies was sent to the District Court for safe keeping, while a summary of the statistics was sent to the Secretary of State in Washington, D.C.

Until 17 February 2021, the National Archives and Records Administration (NARA) believed the 1810 enumeration for Salem was missing—it being the only absent census for the entire Commonwealth. Remarkably, the census was recently rediscovered after an Instagram post by the Phillips Library at Peabody Essex Museum (PEM) caught the eye of Jack Kabrel, an archives specialist with the National Archives at Boston. The census had been squirreled away in the Phillips Library collection for years, arriving sometime between 1810 and the 1940s.[1]

After careful consideration, it was determined that the census belonged in the National Archives and the item was transferred. However, before the almost 100-page document was moved, PEM scanned the census notebook in full color and partnered with American Ancestors/New England Historic Genealogical Society (NEHGS) to create a searchable database of the images. The collection can be found on our web site at AmericanAncestors.org (available to all members, including free Guest Members).

But it begs the question: Why did the Phillips Library have the census notebook in its collections, and not NARA? Well, the devil is in the details.

Remember, in 1810 assistant marshals were instructed to send one copy of their enumerations to the district court, while a summary of the statistics was sent to the Secretary of State. Those 1810 censuses remained at their respective court houses until 1830, when the courts were asked to forward their 1790-1820 census holdings to the Department of State.[2] It appears that the Salem enumeration never made it. This likely means that Mr. Burrell never forwarded his original enumeration on to the U.S. Marshal in Massachusetts and provided him only with the statistical information required. I am sure Mr. Burrell never realized the frustration he would cause genealogists … for the next two centuries!

The truth is, many, MANY enumerations of the 1810 United States Federal Census are missing.

The truth is, many, MANY enumerations of the 1810 United States Federal Census are missing. For example, we don’t have surviving copies of population schedules taken in Washington, D.C.; Georgia; New Jersey; Ohio (Washington County survives); and Tennessee (Rutherford and some of Grainger Counties do exist). These records losses were preventable! They are missing today due to a lack of diligence by the assistant marshals, like Mr. Burrell, or a mishandling of the material once it made its way to the courthouse (i.e., fire and flooding). But there is a third possibility. These records might be safely stored in local courthouses, archives, and libraries—one just needs to know where to look!

Therefore, I am urging all readers of this article to research whether the 1790-1820 censuses survive for their town or county. If not, you might be able to reunite more of these lost censuses with the National Archives. I wish you happy hunting!

Here are some of the more well-known persons enumerated in the 1810 Federal Census for Salem, Mass.:

1 thought on “Devil in the details”