There was a great commotion in the room that day, a veritable kerfuffle you might call it. I both saw and heard the doctor yell “Get me her chart,” as a well-practiced melee ensued. Our baby girl had just been born, and she was neatly being held by an overprotective nurse. I looked over from our baby to my wife, then to the doctor, and around in disbelief; my wife was exhausted and under an unwonted sort of anesthesia. “Was there something wrong with our baby? Was my wife going to be okay?” I nearly yelled my dumbfounded query, my anxiety level beginning to soar well past normal expectancy. The doctor didn’t seem inclined to say anything at this point, as another ‘sturdy’ sort of nurse held up an old school paper chart for him to flip through one-handed in an apparent effort to see if he had missed something along the way. Then, and quietly, an additional tiny foot appeared in this theater of life, preparing to make her debut. It was only then that the doctor looked up at me to say “Have you ever considered the possibility of twins?”

Well, 1981 must have been a whole lot closer to the Stone Age than I ever thought possible. It’s as peculiar to me now (as it was then) that my wife and I had no idea whatsoever that “we” were pregnant with twins and that the medical folks of those by-gone days were equally in the dark about such things. Nevertheless, we were indeed meant to be surprised that happy day, and forty years later we still marvel and celebrate the birth of our twin daughters. I remember very well rushing into the waiting room to announce their arrival to family and friends and exclaiming “It’s twins! It’s twins!” All those present (and then some) were equally startled and amazed at this incredible surprise. It was at about this time that I heard someone on my side of our clan say “We haven’t had a set of twins in the family since the Burson twins…” What???

I remember very well rushing into the waiting room to announce their arrival to family and friends and exclaiming “It’s twins! It’s twins!”

As happy as I was to eventually learn just who the Burson twins were, I soon learned that the ability to “twin” is thought to be carried through the mother’s genetics and that dear old dad (moi) has perhaps little to do with any “twinning” other than to maybe assemble a second crib or (as in my case) paint the bedroom a rosier shade of pink. The young genealogist in me was curious about this, though, as my wife’s ancestry (and now my daughters’) was one completely veiled in the mysteries of early twentieth-century immigrants from France, Spain, and Eastern Europe. My wonderful in-laws had only sparse knowledge of their ancestries, and no knowledge of twins born in my wife’s family in recent memory or otherwise. With that said, the genetic origins of our own set of twins remains “swaddled” in these mysteries. However (if I do say so myself) all that mystery might just give those old Burson twins a bump to “runner-up” status in the queue of any twins that came before our own.

That was forty years ago. Flash forward to the present, when Chris Child’s recent post on middle initials and alternative middle names (and our mutual enthusiasm for playing a good game of genealogical Clue from time to time) has me thinking about certain naming practices among my own kin. This, along with my last post about a set of unnamed triplets, caused me to further consider some of the not-quite palindromic naming traditions (I use the word “traditions” loosely) with regard to multiple births within my family. It was then that I recalled that epic day back in ‘81, and my own connection with the “Burson twins.” I remember that they had been given what I like to call “mirrored names,” in that one of the boys was called “Harold Raymond Burson” and his twin brother “Raymond Harold Burson.”1

Now, my first instinct is definitely to cry foul at a lack of imagination when it comes to the naming practices of my paternal lines, but I suppose I have to consider the times. The Burson twins were (after all) born fairly dirt-poor in turn-of-the-twentieth-century Kansas. Heck, maybe it was considered a normal thing in the Burson family to “mirror names.” I don’t suppose any of these folks gave “a second” thought to tracing these boys, genealogically speaking, in later years when the issue of “Which one was Harold and which one was Raymond?” might get a little sticky in the storytelling. No problem though, as surely this ‘mirroring of names’ couldn’t have happened any other time in the family tree, right? Well, that might be considered wishful thinking on my part…

Okay, for a little bit of background here, let me just say that “the Burson twins” were the “sons of my great-grandmother’s half-brother Joseph.” No big deal right? (Hence that very apt phrase in 1981 at the birth of my own twin daughters of “We haven’t had a set of twins in the family since…”) But as you might have suspected, there’s more to these “reflecting names” than meets the eye. You see, my great-grandmother Gertrude (Burson) Record’s mother, Sarah Jane (Harris) Burson, was not only related to the Burson twins by her marriage to Gertrude’s father Hiram Burson, but also related by blood in that the twins’ mother was her sister Ida Harris, the wife of her daughter Gertrude’s half-brother Joseph Burson. (Does your head hurt yet?) Yes, it’s a wonder we all don’t suffer from obscure genetic illnesses at this point. But, hey, as if all that family fun wasn’t enough to curdle the milk, it’s really from here that this story gets (in my opinion) even weirder. Bear with me here… 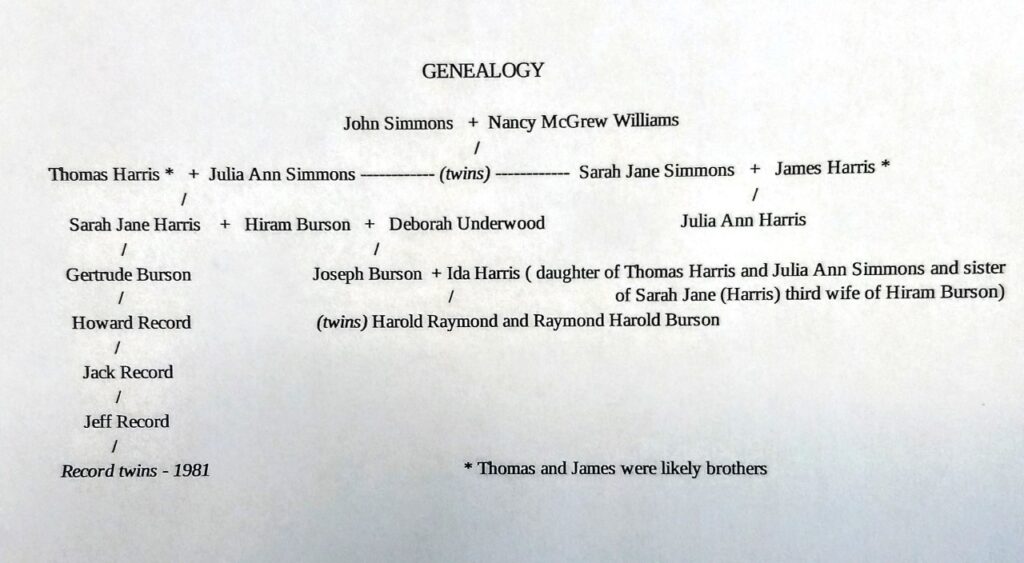 My great-great-grandmother Sarah Jane (Harris) Burson’s mother was Julia Ann (Simmons) Harris. Julia Ann Simmons was born in Dubois County, Indiana on 9 July 1832. Julia Ann Simmons, who married Thomas Harris, had a twin sister whose name was Sarah Jane Simmons.2 Julia Ann’s sister Sarah Jane married James Harris, a man who appears to have been the brother of Thomas Harris, who married Julia Ann. This meant that the twins Julia Ann and Sarah Jane had of course the same maiden name but that they also had “mirrored” the same married name. No big deal, right? However, Julia Ann (Simmons) Harris and Thomas Harris went on to have a daughter (my great-great-grandmother) whom they named after Julia’s sister Sarah, calling their daughter Sarah Jane Harris. Then, Julia’s twin sister, Sarah Jane (Simmons) Harris, and James Harris had a daughter that they named after Sarah’s twin sister, Julia, calling her Julia Ann Harris. Thus the mirroring of names through a set of twins who married brothers and named their daughters after their respective twin becomes fairly complete. (I won’t even go into how they also had respective sons also named after each of their husband’s brothers.) Uggh. 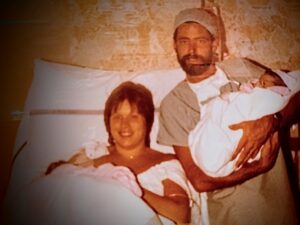 As I said before, I suppose it’s all “no big deal” in terms of names. I mean most kids will answer when called home or to the dinner table. True enough, too, is that most folks out there in the big wide world don’t go crazy looking for and trying to distinguish similarly named folks in census records et al., as “we” do. I just find it oddly interesting (and indeed somewhat poetic) that this particular (and very Quaker) branch of my family tree “mirror named” their children so darn thoroughly. How ever did they keep it all straight?? (Indeed, how did they sleep at night?) Sadly, I am reminded all too well of William Sanderson’s line from The Bob Newhart Show: “Hi, I’m Larry. This is my brother, Darryl. This is my other brother, Daryl.”3 Buy a good nineteenth-century baby name book, people! Stop the insanity, I say! Surely, these folks can’t belong to me! (Wink!)