An article I co-wrote on a colleague’s ancestors in Berwick, Maine was recently published in The Maine Genealogist. While I have worked on families in Maine over the years, and several of my colleagues have specialties in “Northern New England” (Maine, New Hampshire, and Vermont), I have generally stated that my New England ancestry is largely southern (Massachusetts, Connecticut, and Rhode Island). Just how much northern New England ancestry do I have?

My connections to Vermont are even briefer. A great-great-great-great-grandmother, Julia (Vaughan) Perry (ca. 1814-1899), was born in Allegany County, New York. Her parents William and Elizabeth (Foster) Vaughan were born in Massachusetts, Vermont, or Rhode Island (sources vary). William’s probable parents were born in Rhode Island and had moved to Wallingford, Vermont by 1800. I do not know who Elizabeth’s parents are. Those are my only known ancestors in Vermont![3]

William’s probable parents were born in Rhode Island and had moved to Wallingford, Vermont by 1800.

Aside from my Russell ancestors, described above, who were in Mason, New Hampshire, I have a few other ancestors who traveled through the Granite State on their way to New York, as well as some other Ulster Scot families which paused in Londonderry, New Hampshire in the early eighteenth century, all later traveling west. Again, for these ancestors in the three northern New England states, none were living there in the seventeenth century. Do I have any ancestors in Northern New England in the 1600s? To date, I have found … one!

My paternal grandfather descended matrilineally from Phebe (Leete) Parkhurst of Watertown, Massachusetts, and years ago I decided to trace Phebe’s matrilineal descendants through her four surviving daughters. While my grandfather’s line moves in the 1690s from eastern Massachusetts to northeast Connecticut, where it remains today, I noticed some substantial geographic variety among the matrilineal descendants of Phebe’s other daughters, ending up in Rhode Island, Martha’s Vineyard, and New Hampshire. While I had largely considered myself to have little New Hampshire ancestry, through this matrilineal study project I learned I was distantly related to many of the early English families of New Hampshire, such as Batchelder, Dearborn, and Sanborn, among others.

However, recently showing my descent from Phebe to a friend made me realize that I do have a single ancestor who lived in New Hampshire in the seventeenth century, Mary (Carter) (Wyman) Batchelder (1648-1688), a granddaughter of Phebe (Leete) Parkhurst. Mary’s early years were in her native Woburn, Massachusetts, where she married John Wyman, Jr. in 1671, and had two children – John in 1672, and my ancestor, another Mary, in 1674. Mary’s husband John died in 1675 at the “Great Swamp Fight” (or Great Swamp Massacre) during King Philip’s War, leaving Mary with two young children. The following year in Woburn, Mary married Nathaniel Batchelder, who was the widower of Mary’s cousin Deborah (by whom he had nine children). Nathaniel was a resident of Hampton, New Hampshire, and Mary moved there as well. Even though the elder Mary had a living daughter Mary, she had two daughters named Mary with Nathaniel, both dying young, the last Mary likely resulting in the elder Mary’s own death on 16 December 1688. Of Mary’s ten children (two with John Wyman and eight with Nathaniel Batchelder), all but the second and third Marys survived to adulthood.[4] 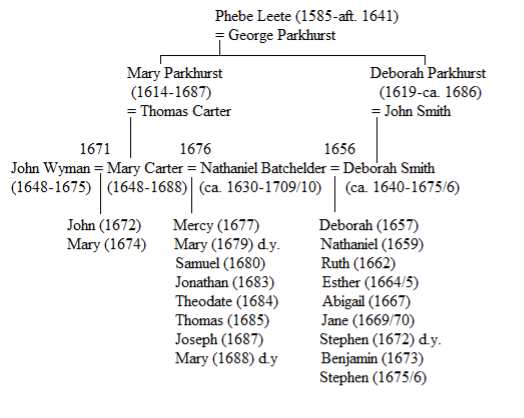 What I am not certain about is what happened to Mary’s children by her first marriage when she married Nathaniel, especially as she attempted to name two of her daughters the same name as her living eldest daughter. Did the younger John and Mary travel to New Hampshire with their mother and stepfather, or did they stay in Woburn with other relatives? At the elder Mary’s death, her eldest two children were only sixteen and fourteen. If they had gone on to Hampton, both were back in Woburn where they married in the 1690s. My ancestor Mary Wyman and her husband Thomas Pierce moved shortly after their marriage to “northern” Plainfield, Connecticut (present-day Thompson), not far from where I was raised.

So, for ancestors in seventeenth-century northern New England, I’ve got ONE!

[2] The first (and so far only) volume of New Hampshire Families in 1790 was published in 2007, profiling families from the first federal census. It included a sketch on my ancestors Jason and Elizabeth Russell, which I believe might be just one of two families in my ancestry enumerated in New Hampshire in 1790.

[4] Genealogy of the Wyman family, 4; Genealogical Dictionary of Maine and New Hampshire, 81. Nathaniel married a third time, but had no children by his last wife – seventeen children (fourteen of whom survived) was plenty.