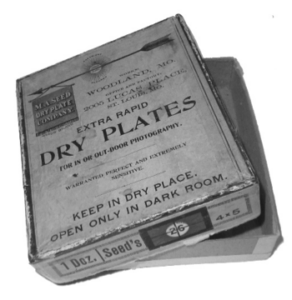 When Mom’s father died, a trove of photographs was discovered in his basement. They had been put there, out of sight, many years before. They were mostly in the form of glass plate negatives – pictures taken by my grandfather when he was a young man, between 1905 and 1919. Many were of his first wife, her family, and areas where they lived. This, of course, was the reason to have put them away. Some of them were in the original boxes in which these dry glass plates were purchased. And there is some history even on those boxes. One is labeled “M.A. Seed Dry Plate Co.” and another is “Eastman Kodak Co., Rochester, N.Y. successor to M.A. Seed Dry Plate Co.”[1]

For some time, not much was done with these negatives. The content of photographic negatives is not easy to determine just by holding them up to the light, and 4 by 5 inch glass plates could not be taken to the local drug store for printing. When I came into possession of them I tried making direct contact prints in a make-shift darkroom. But this process was tedious and other things took priority. Along came the digital revolution and I obtained a scanner with the capability to handle these negatives. In a fairly short period of time, I had scanned all 133 glass and 26 film negatives. These were then digitally converted to positive images.

Now the issue was identifying the subjects, locations, and dates of these photographs. I had very little to go by, and my parents couldn’t add much. They knew my mother’s family had lived in the Crawford-Hotchkiss area on the western edge of Colorado, and then for a year or so in Texas, where my grandfather hoped to participate in the oil boom that was happening there. After a year of disappointment in the opportunities in Texas, the family moved to Denver, where my grandfather opened a dry cleaning business. The photographs could have been taken in any or all of these places. At the time, it was difficult for me to explore these possibilities as I live a thousand miles or more from all of them. 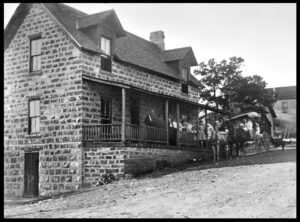 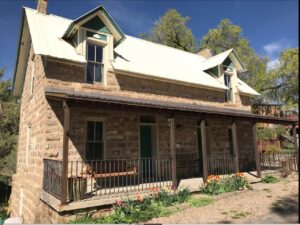 Above, left: The stone house in Crawford, Colorado, taken by my grandfather in about 1912. Above, right:  The Stone House Inn in Crawford, photo from their website in 2021.

At first, the only progress was in assigning numbers to the images and sorting them by subject matter. One day I searched the internet to see what information was available for the towns of Crawford and Hotchkiss. There were a few items of minor interest, but one thing that caught my eye was an advertisement for the Stone House Bed and Breakfast.[2] I thought the stone house in the ad looked familiar. Sure enough, the comparison of the screen image with one of Grandfather’s photographs resulted in a very close match. I sent an e-mail with the picture to the proprietors, asking if this was their building. “Yes!” was the answer. And, then, “Where did you get that picture?” We exchanged a few e-mails and I ended up sending them a mounted print of that photograph. Soon after, I had an e-mail exchange with a realtor in that area, regarding a property he was selling that formerly had been the site of a school that was in one of my photographs.

And, then, “Where did you get that picture?”

A few months later, one or both of those contacts resulted in an e-mail from a man in Hotchkiss who said he was very much interested in my grandfather’s photographs. He was in the process of putting together a presentation for the local historical society and thought he could use some of them. In fact, he wanted me to send all the photographs to him. Well, I was uncertain about that. Who is this person, and would he give proper credit to my grandfather, and what would he do with the images afterward, and would I lose total control of the use of my grandfather’s photographs? He repeated the request a few days later in a telephone call.

I spent several days agonizing over this decision and ended up sending him a CD with all the photos, each one imbedded with my grandfather’s name. Along with that he agreed not to copy or give the CD to anyone else.

A few weeks later, he called me on the telephone and said he wanted to talk about my photographs. “Now as to number one, it was taken a quarter mile downstream from the Gould Reservoir and shows work being done on the lowline ditch, sometime between 1902 and 1910. The next one was taken between 1907 and 1908 in Red Canyon on Fruitland Mesa, looking southwest and showing a channel being dug for a siphon pipe. The next one…” This went on for two hours before he was summarily called to a lunch that had been sitting for quite a while. Before that call, and the several other lengthy ones that followed over a period of a week or two, I had been in great uncertainty about all of the photographs. Now, I was conversing with someone who was giving me dates and precise locations for most of them. Not only that, he was providing detailed descriptions, such as “That hay stacker in number 19 is what was called a Mormon stacker. Do you see the metal stake anchoring it? That is an axle from a Model A Ford. That plow in number 37 is what is called a three-bottom disc plow.” And he knew the names of many of the people in the photographs as well as some of their histories.

With great initial reluctance, I had unknowingly been connected to an individual who knew a great deal about my grandfather’s photographs. And as far as I could tell, he was the only one in the world who did. At this point in my searching, everyone directly connected to these photographs was no longer living. Where would I be if I had said “No” to his request?

Did I say luck was involved?

[1] The M. A. Seed Dry Plate Company, based in Woodland, Missouri, and started by Miles Ainscoe Seed in 1879, was bought out by Eastman Kodak in 1902. Dry plates were an advancement over wet plate technology, where the plates were coated by the photographer in the field and required immediate development after exposure. Dry plates were prepared in factories and could be stored until used and then developed when convenient.