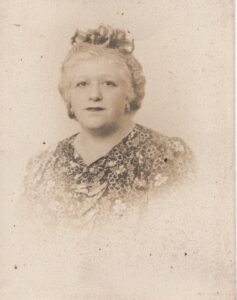 One of my brick walls for many years has been trying to determine when my maternal great-grandmother Tessie Freundlich died and where she was buried. She is the mother of my maternal grandfather, Alfred Schild. I never met my grandfather, as he died a few years before I was born. His lineage was always a bit of a mystery as we were not in touch with relatives over the years. I have made some great progress on identifying their immigrant lines back to Eastern Europe. The family emigrated to America during the 1880s, when many of the pogroms were occurring.

A few weeks ago, I decided to take on myself as a client and investigated every record I could find on Tessie. Her first husband, Herman Schild, died in 1945. She married her second husband, Louis Kaiser, in 1946. I ordered the second marriage license application and certificate copy from the New York City Municipal Archives. That gave me Tessie’s address in Brooklyn, New York.

During one of my regular phone calls with my grandmother, I asked her about where Tessie was buried. She said that she was buried in a Long Island Jewish cemetery and died in the 1960s. I reviewed the NYC Death Index, which is compiled through 1965, and she was not included. This made me think that her death occurred later than 1965. There was also no listing for her in the Social Security Death Index.

As I went through each cemetery and no records found, I crossed them off the list.

I then compiled a list of cemeteries and started making phone calls and sending off emails asking for the cemetery staff to check records (where there was no online burial search on their web site). As I went through each cemetery and no records found, I crossed them off the list. I eventually posted my latest search on Twitter and received some very helpful replies. One of my Twitter friends provided me with a Wikipedia article about Cemetery Row (where several Jewish cemeteries are located in the same proximity). I went through each of their web sites and eventually came across Beth Moses Cemetery.

Beth Moses had an online burial search. I searched for “Tessie Kaiser” and voila! Her record came up with a death date of 13 April 1966. When I first tried searching Alfred Schild, no entries came up. I then tried searching for “Alfred” with no last name and looked in the block near where Tessie was buried. He was listed as “Alfred Shild” and was buried next to his mother. This is an important reminder that even today spelling doesn’t count. 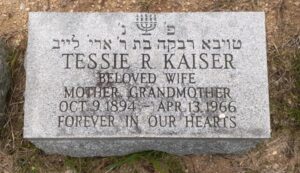 I recently got in touch with one of my new cousins, one of Tessie’s grandsons. He provided me with the lovely photograph of her. His brother even went to the cemetery to take photos of the graves. The inscription for Tessie’s gravestone is perfect: “Beloved wife, mother, grandmother… Forever in our hearts.” 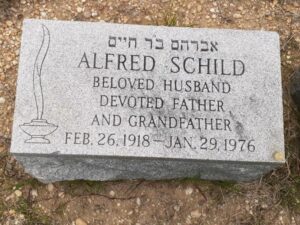 I hope in the future that I can visit their gravestones and finally introduce myself to my grandfather and my great-grandmother. I want them to know that they were not forgotten and that I will honor them by continuing to trace the family. My ancestors are forever in my heart.

4 thoughts on “Forever in our hearts”