[Editor’s note: This series began with Part 1 and Part 2.] 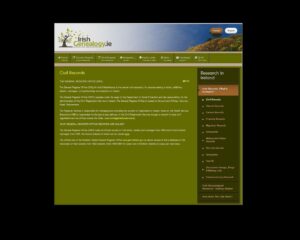 Until recently, unless you were lucky enough to know the names of your immigrant Irish ancestors’ parents and/or the place(s) where they were born or resided in the Emerald Isle, such information was often difficult if not impossible to find in American records. That imposing brick wall remained unassailable for many seeking to pursue their ancestral connections in Ireland … until now. During 2015-2016 digitized troves of the two most significant sources for Irish family history – Catholic church registers and civil vital records – were released online, freely accessible on any internet-enabled device. Like the notorious Berlin Wall, that longstanding, insurmountable impediment to discovering Irish ancestry crumbled almost overnight.

In 2015 the National Library of Ireland (NLI) launched online its unique and comprehensive Catholic Parish Registers collection: 550 digitized microfilm reels containing more than 3,500 baptism, marriage, and some death/burial registers from 1,086 parishes in Ireland and Northern Ireland (https://registers.nli.ie/). Some registers dated from the mid-1700s but most started a century later, and the released records ended about 1880. However, there were major limitations on using them: there were no accompanying indexes, the registers of each parish could only be browsed one by one, and the 1880 cut-off date was early compared to the availability of church records from many other countries into the twentieth century. The latter situation was particularly regrettable given the large exodus of the Irish, continuing for decades thereafter, which made reliance exclusively on civil records necessary beyond that year. Fortunately, within a year or two Ancestry and Findmypast created indexes to this collection, with links to the digitized records on the NLI site.

Then in 2016 Ireland’s government Department of Tourism, Culture, Arts, Gaeltacht, Sport and Media released the first digitized collection of civil registration records of births, marriages, civil partnerships, and deaths (https://www.irishgenealogy.ie/en/). Currently available are births from 1864 to 1920, marriages 1845-1945 (non-Catholic registrations began in 1845, Catholic in 1864), and deaths from 1871 to 1970. (The years 1864-1870 will be included in a future release, and they are already indexed.) Indexes to these civil vital records had been online earlier, but now one could search the indexes to retrieve results linked to the corresponding digitized records.

The years 1864-1870 will be included in a future release, and they are already indexed.

These new indexed online collections of church and civil vital records made it possible for researchers to overcome longstanding barriers in their quest to discover the ancestral places their Irish forebears lived, and to build their family trees with relative ease. However, as revealed in Part 1 and Part 2 of this series, depending on when particular Irish immigrants lived and how much information is available about them, different research strategies may be required to track them back home. And until the NLI puts a notice on the Catholic Parish Registers main search page about the availability of indexes on multiple external genealogy sites, that wonderful resource will not be fully utilized.

Having learned the hard way that there are multiple paths and pitfalls on the way to discovering Irish roots, I offer the following step-by-step approach to maximize your chance of success. Other search options might well be available, e.g., U.S. death records and Catholic parish records might reveal the names of deceased immigrants’ parents and/or their abodes in Ireland, but for most researchers the methods laid out below will probably yield that critical information much faster.

Before we begin, a few clarifying points are appropriate. First, for ancestors born to Catholic parents before extant baptism records, the steps that involve parish registers are obviously irrelevant; however, if you find them using other sources you may be able to find additional information about them and/or their families in surviving marriage, death/burial, and/or congregational records of the relevant parishes. Second, for non-Catholic ancestors, look for and search church records of the relevant denominations. In the late nineteenth century, 80-90% of the Irish population was Catholic, so the methods recommended below should work in most cases.

Third, aside from the civil registration records, I have limited recommendations to the “big four” genealogy megasites (Ancestry, Findmypast, FamilySearch, and MyHeritage) for a host of practical reasons: they are familiar to family historians, they have bountiful resources, two of them have indexed the NLI Catholic Parish Registers that are essential sources, they are widely accessible for free, and they will likely produce success quickly. Finally, and most importantly, although the recommended research strategy below was conceived from the perspective of an American descendant of Irish immigrants, these steps will work for those researching Irish roots whether or not their ancestors emigrated.

Regardless of which database(s) reveal(s) your ancestor’s place(s) of birth/residence, continue searching Ancestry to fill in family lines backward and forward.

For individuals who were born, married, and/or died in Ireland after 1864, regardless of religious affiliation, search the civil registration records covering the years available for each category as noted above. This will supplement and cross-check the parish records up to about 1880, and thereafter serve as the only comprehensive source of vital records into the twentieth century.

For individuals born before 1864:

For individuals born in 1864 and after: