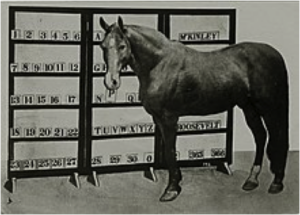 My childhood friends and I are all turning 60 this year. I purchased matching birthday cards for them with this horse on the front. Of course I had to find out his story!

Beautiful Jim Key was a famous horse born in 1889 and owned by the former slave, self-trained veterinarian, and patent medicine salesman William Key. William was a skilled horseman who rescued an Arabian mare, a badly abused former circus horse, and bred her to a Standardbred stallion. He had hoped to get a racehorse; instead he got a clumsy, sickly colt that he named after the town drunk. But William noticed Jim had been letting himself out of gates, opening drawers to get himself apples, and learning tricks from the dog. William developed a training program for Jim and spent seven years nurturing the horse’s unusual talents. Jim eventually learned to spell short words, solve basic math problems, tell time, identify playing cards, use a cash register, make change, dial a phone, sort mail, cite Bible passages, and faint on command! William Key always emphasized that he used only patience and kindness in teaching Jim—never a whip. 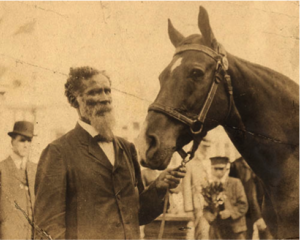 Horse and trainer began performing a comedic medicine show at local fairs to promote William’s healing Keystone Liniment for humans and equines. Fame and fortune arrived for the pair after President William McKinley saw Beautiful Jim spell out the names of politicians requested by the audience at the Tennessee Centennial Exposition in 1897. McKinley was quoted in the press as saying their show was the “most astonishing and entertaining” he had ever seen. 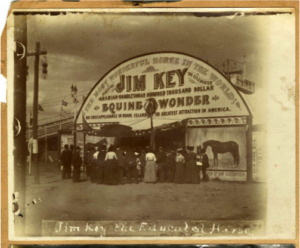 William soon formed a partnership with entrepreneur and animal activist Albert Rodgers and the act began touring the United States in a special railroad car. Beautiful Jim and William performed at venues in most of the larger American cities, from Atlantic City to Chicago, and including New York’s Madison Square Garden. William—who had served his master’s sons as they fought at Fort Donelson, Stones River, and Shiloh, and who was arrested for trying to smuggle a Black man through Union lines—convinced Charleston, S.C. city officials to allow African Americans a day to attend the 1902 World’s Fair. Two years later, Beautiful Jim Key was the most popular attraction at the St. Louis World’s Fair. 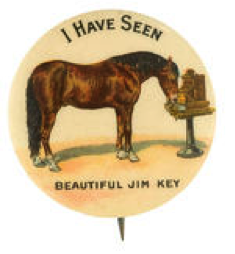 When William started a club called “The Jim Key Band of Mercy” to promote the fledgling cause of the humane treatment of animals, more than 2 million people joined. Millions of children took the “Jim Key Pledge” to always be kind to animals. Beautiful Jim and William Key’s collaboration was applauded by Boston’s own George Thorndike Angell, founder of the Massachusetts Society for the Prevention of Cruelty to Animals,. In 1906 William and Jim retired back home to Tennessee after nearly 10 years on the road. William died in 1909 at age 76 and Jim in 1912 at 23.