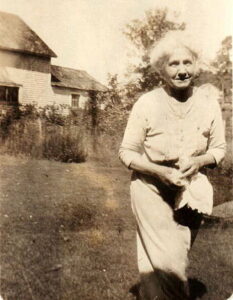 When I began researching my paternal ancestors as a high school student, I had many questions about Barbara Shakshober, the oldest sister of my great-great-grandfather, Jacob Shakshober. Because the 1860 and 1870 censuses report her birthplace as New York,[1] I concluded she must have been born in or near New York City, her parents’ port of arrival to the United States. Finding Barbara’s birthplace might lead to the discovery of her parents’ neighborhood, and perhaps other ancestors with their elusive, often corrupted surname.

The Shakshobers had moved to Arlington, Bennington County, Vermont, by 1860, where the family was composed of John, his wife Anna Maria, and their children Barbara, age 6; Lydia, age 5; John, age 3; and Mary, age 1. Barbara married Theodore Gaul, a jeweler, in Arlington on 16 January 1876.[2] Their original marriage record does provide a New York City birthplace for both parties. A son, Ralph Gaul, was born in Arlington six months later.[3] By 1880, Barbara Gaul was living apart from her husband in Seymour, New Haven County, Connecticut, working as a milliner—her profession prior to her marriage—and boarding with “Clara Schockober,” age 19, also employed in millinery.[4] I assumed Barbara had merely separated from her husband. In 1920 and 1930, she lived with her son Ralph and his family in Bennington, Vermont, possibly indicating her husband had died.[5]

As a college student, I made a few trips to the Vermont State Archives and the Vermont Historical Society to research the Shakshobers in general, but never Barbara in particular. On one of those trips, however, an astute archivist suggested I check the divorce docket books to learn whether Barbara Shakshober and Theodore Gaul formally divorced.

[She] left him for “his willfully deserting her and ever since refusing to live with her or provide for her support.”

Barbara Gaul appeared in Bennington County Court in March 1879, stating she had cohabited with her husband from the date of their marriage on 16 January until 15 February 1876, when she left him for “his willfully deserting her and ever since refusing to live with her or provide for her support.” The court dismissed her petition for divorce in the June term of 1879. But the following year, Theodore Gaul initiated divorce proceedings against Barbara Gaul for the same cause. He stated the couple had lived at the home of Barbara’s mother in Arlington for three or four weeks when his own mother fell ill.

After he returned from tending to his mother, Barbara announced she would no longer live with him. A relative of Barbara’s testified that she had been forced to marry him; “would never live with him a day” and would “rather beg” than live as his wife. To her credit, Barbara’s mother Anna “would not let [Barbara] live with him [;] that she did not like him.” Turned out of the Shakshober home, Theodore went to stay at a local boarding house where he had lived in his bachelor days. The court granted his petition for divorce in the December term of 1880.[6]

I had initially been interested in Barbara Shakshober as a key to my German origins. In high school, I contacted the New York City Municipal Archives to request her birth record, but no record was found. Yet the Gaul divorce file reveals the significance of Barbara’s story in its own right: a nineteenth-century young woman born to immigrant parents, compelled to marry for the sake of her unborn child. It hints at the working woman she would become and the strength of her relationship with her only child, Ralph. Barbara passed her final years in the home of her youngest sister Sybilla Phillips, at whose home she died on 29 November 1934.[7]