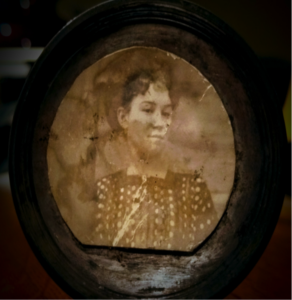 Once rumored to have been Aunt Jennie, her image has gazed back at me for years. Certainly she was Jennie Sage – or so Nana had said before several strokes took hold of Nana’s memories and clutched them tight within her. Jennie gazed out from her oubliette of a broken pocket watch, watching us as if we were playing that age-old genealogical game of Can you guess who I am? Indeed, she’s ‘stayed’ Aunt Jennie for years now, though at the time how my grandmother knew this with any certainty was lost on me. Yes, lost, not unlike Nana’s evaporated memories, and with the question of how my grandmother had come to have the old pocket watch in the first place never resolved.

So the idea of who Jennie Sage was, along with her forgotten image, fell to me, inherited pell-mell out of Nana’s many things. All these years later, I’d be hard pressed to remember what actually brought me to claim that old watch as my own, or how I discerned that, yes, she most certainly was the woman that Nana had more often than not simply called Grace.[1]

Having Jennie near me has brought me back to just one concept, though – that all-too-simple concept of time. Jennie’s image is (for me) one that underscores “the calling” of just who we are and what we all do ‘here.’ We’re the timekeepers. I know this isn’t some big revelation, but in some subtle way it’s Jennie’s ensconced presence that has best answered the question as to what my grandmother was doing with the old watch in the first place. It has made me realize that as we travel through time, we often give it (time) back to each other in some form or another; as we record it, we also keep it. It’s how I go about keeping Aunt Jennie’s ever-so-slightly mischievous smile alive even now.

[As] we travel through time, we often give it (time) back to each other in some form or another; as we record it, we also keep it.

I guess because of this I’ve wanted to examine this notion, that of the “giving of time,” in all its many forms. I’ve wanted to check out the connections shared through its various apparatuses, such as in the ‘Grandfather types,’ the mantle ‘pieces,’ the fob watches, or the Cuckoo sorts, and, yes, even with the occasional designer tattler of an electric Felix the Cat-type or two. What is it with all these clocks, all this time, that seems to follow us forward from one generation to the next? Are they only simple objects of measurement? Or is there something else? Yet before I go down this path (in what I hope is not just another one of my ‘untimely’ soliloquies), I really have to augment my discussion here of our relationship to clocks and indeed to time with something that can surely come as no surprise; that, yes,“my people,” my family, while largely hardworking and humble, were also utterly, terribly, and unabashedly quite poor. While the economic status of my varied family branches and/or its members will at first appear unrelated to that image of Jennie, or the ‘timely’ topic here, I very much hope you will allow me to explain…

No doubt you can see that Miss Jennie Sage isn’t wearing the latest nineteenth-century Parisian couture while posing for a picture at the local dance hall while waiting on that last stagecoach west. Yep, there are no quaint Astors or Vanderbilts to be found hidden near our Little House on the Prairie here. This church-mouse sort of economy appears to have been universal for all the branches of my kin, and Jennie was no exception. However, poverty be damned, as I went about ascertaining that Aunt Jennie “was just who Nana said she was,” I began to see that notwithstanding all of my families’ humble means, “giving the gift of time,” i.e., giving the gift of a timepiece, was something all of them appeared to have in common, and took great pride in so doing. It’s as if the idea of “time everlasting” overcame any such pecuniary lack and became their most precious, if not their only, legacy to give. (Sorry Aunt Jennie, I realize that this is all you’ve been trying to tell me about for years…) It didn’t matter if we weren’t “well-to-do.” We could still preserve memories in a most invaluable gift – literally the gift of ourselves in the form of time. 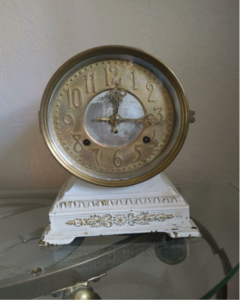 I noticed this a few weeks ago while visiting my Dad’s home in Oregon. There I was greeted by an old friend, a squat ‘iron-bottomed’ clock sitting sentry, a well-worn and somehow quite maternal picket standing guard in his living room. I like to call it the “Burson Clock,” a turn of the century gift for dad largely connected to that end of our clan. It’s a reminder of just who the Burson family was for Dad, and indeed who they are for me, too. Believe me when I tell you that any “living connection” to the Burson family is now long gone. As you know, families become so very scattered – but that old timepiece still “remarks” the rhythms of those very Quaker Bursons when they were here with us. I marvel at the old clock and all that my great-grandparents must have gone through to acquire it while still putting food on the table. As mysterious in its origins as Aunt Jennie, the clock itself is no fancy deal, but is one carved out from the good wishes of their modest lives. Stoic, the Burson Clock sits as a gentle reminder of just who those humble and hard-working people were in life, and indeed what they should always mean to us.

Okay, my friends, you know me too well. There just has to be more time to tell of here, right? Further, there has to be some sort of a Mayflower story among all this timekeeping and, heck, I’d be remiss if I didn’t mention it. No, I don’t have some amazing seventeenth-century timepiece associated with the Cushmans or the Delanos.. (Did I mention that my folks were way poor?) However, there is an old clock, one that I stared at in awe as a little boy. It sat high on the mantle of a faux fireplace, and like most things back in the day, it was something we children were utterly forbidden to touch. It was to be revered. The image of it – much like Aunt Jennie’s – has stayed with me; its “brief austerity” sticks in my memory. The old clock sits at Dad’s house now, as if a trusted advisor helping to perpetuate our Mayflower ties and legacy. 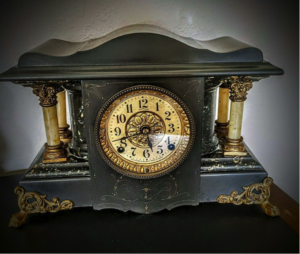 There are probably a lot of names for this clock, yet I choose to call it the “Ogle Clock,” after my great-grandmother who owned it. The clock is much she was, small and good-naturedly stern, practical, and stout, yet largely kind and unassuming, and with just the right amount of bric and brac to adorn her. You see this clock, while never belonging to any seventeenth-century timekeeper, is one that belonged to her, a seventh-generation descendant of Governor William Bradford. (Can you see why they never let me touch it?)

However as Aunt Jennie might have said, “This isn’t the end of it.” In my voyage here of timeless timepiece travel, I have one last clock yet to visit. Like Aunt Jennie’s timepiece, this one sits caged behind glass, frozen “in time” as they say, and was given to me just before the clutches of Alzheimer’s began to close in around my mother and her memories. It’s a different sort of pocket watch than what Jennie’s is. You see, while Jennie’s watch fell almost haphazardly into my possession via Nana’s things, with all of its questions and many broken-down ‘wants,’ I had instead to wait for this singular tattler knowing that in time it was meant to be mine. It was my piece of whatever legacy mom was able to leave behind. She had planned that I would be its eventual steward one day. And indeed, when that day came and it did become mine it was ne’er more than a bittersweet victory. A victory and possession I would have gladly forfeited to spend just “one more last day” with the mother who once knew me as her son. 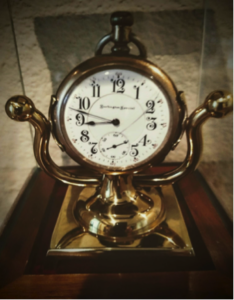 Yes, I’d waited a lifetime for Mom to bequeath me that old pocket watch, knowing that I’d be entrusted to preserve its ‘historicity,’ its time. It’s a watch that ran stagecoach routes, marking Wyoming’s woman suffrage movement and the right to vote – all while remaining a tacit workhorse in a large Western family. While quite well-preserved, there is no ornamental fuss to this ticker, a timepiece I’ve always called the “Wilcox Watch” after its original owner, my great-great-grandfather. It’s a watch that made its way out of the Old West. Each time I look at it I am reminded of my mother and the gifts that have come down to me through the Manifest Destiny of her many New England lines, and indeed through time.

And, yes, as things do, as families do, the old stagecoach driver’s pocket watch may have even crossed paths with a mischievous young girl. A young girl whose image would also appear in a broken timekeep in another time, and in that same picture above. An inkling of a young girl who might have checked the time on her best fob more than once, as she watched for the old man on the stagecoach to do the same. She, after posing for a picture in her best frock while waiting on that last stagecoach home from the dancehall late one night. A girl who’d never know the great-great-grandson of that old stagecoach driver would turn out to be her sister’s grandson, and just a guy who’d wonder who she was one day.

Yes, that mischievous timekeeper of a young girl, a girl called Jennie Sage.

[1] Jennie Grace (Sage) Cameron (1890-1974). Her identity as the woman in this pocket watch was confirmed in the photography collection of Lora Webb Nichols on file with the University of Wyoming.