As a long-suffering amateur genealogist (cue violins!), I suspect there are others like me who find themselves burdened by the proof required in matters genealogical. For me, I admit that is not unique to genealogy – back in the day, I declined to complete work for a second degree, eschewing the rigor of thesis requirements!

Like all genealogists, I have my brick walls, some of them without even a hint of where to go from here. Others, however, have ample circumstances to suggest the likely leap, but are simply unyielding in hard facts to prove my speculation.

A few years ago, I completed a sketch on Prince Williams for Families of Western Massachusetts, where I dealt with the frustration of being unable to prove a second wife’s parentage. Despite my firm conviction to the contrary, there were good reasons to be suspect of the speculation I offered. There was disagreement in extended family records; there was a strange land sale that suggested a third wife; and there were few records in rural upstate New York in the decades after the Revolution … and the records that did exist were equivocal.

Of course, I had my reasons to believe I knew the answer.

Of course, I had my reasons to believe I knew the answer. The supposed parents of my purported great-great-great-grandmother, Jerusha (Havens) Williams, had lived near Prince Williams, my known ancestor; there was an unknown Havens daughter captured in the 1790 and 1800 censuses, and a few other supporting circumstances. (You get the gist.) Over the course of 20 years, I had researched every avenue available and written multiple analyses, only to come each time to the point of “probable.” There remained the nagging questions: Who were her parents; was there a third wife; which children, if any, were hers?

As one of few living in the only descendant line from the two known wives of Prince Williams (through sons John and Benjamin), this was no trivial matter for my personal family history. But was that correct? To slake my frustration, I decided to see if answers could be found in DNA analysis. 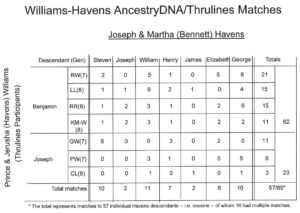 Fortunately, I was able to establish one suspected matrilineal lineage from Jerusha, and others for comparison from a suspected sister, a daughter of Martha (Bennett) Havens. Candidates for mtDNA testing were identified and agreed to participate. While waiting for those results, a cousin match stimulated review of autosomal results across several providers. Before the mtDNA results came in, “crowd sourcing” of matches from other known Williams descendants to more than 50 living Havens descendants had been documented. So the exact mtDNA matches were not unanticipated when they arrived.

Today it feels good to know that Jerusha (Havens) Williams[1] was Martha Bennett’s daughter; there was no third wife; she is my ancestor, the mother of Benjamin. The burden created by “genealogical proof” … well, it stimulated research I am proud of, and lessened my burden!

Now, who were Martha’s parents?

[1] The sketch on Prince Williams has now been updated on AmericanAncestors.org to eliminate the uncertainties answered by the findings of this DNA project.

9 thoughts on “Burdens of proof”