As most genealogists focus their in-depth research on direct ancestors, I have adopted the term “genealogical orphans” for persons with no living descendants to take an interest in researching them. While we usually document the births of all known children in a family, and sometimes their marriages and deaths, we less frequently go beyond the basics to learn about their lives. We have been encouraged to investigate family, associates, and neighbors (the “FAN club”), but often do so only in search of evidence to document a hard-to-prove family relationship. Yet I have found that these maiden aunts, bachelor uncles, and childless couples often have fascinating stories, and sometimes had profound impact on our ancestors.

A major presence in my childhood was my grandmother’s unmarried sister, Sally Leeds (1896-1984). She was generous with gifts, took my older sisters on a “Fairy Tale Castle Tour” cruise of the Rhine, and (most importantly!) was the main source of family lore, pictures, and artifacts. Trained by the Junior League, she chaired the boards of several Springfield, Massachusetts non-profit institutions, led the fund-raising campaign for her church’s new parish house, was director of Springfield’s Central Volunteer Bureau during World War II, then chaired the city’s post-war Citizen’s Committee on Displaced Persons and was appointed by the governor to the Midcentury White House Conference on Children and Youth. A forceful woman, even her widowed father (a Yankee businessman of few words) called her “The Boss.”

I had heard lots about Aunt Sally’s achievements first-hand as a child, but only when I started researching family history did I discover how many interesting “genealogical orphans” adorned the family tree. A few years ago I wrote about one, the black sheep Roger Morgan (1867-1936), after unearthing the many reasons why Aunt Sally—usually so eager to share family stories—had so little to say about him.[1] His life was full of romantic and business drama, and, although I’d always heard he was childless, I discovered he had an adopted daughter (with more drama).

Recently, I dug into Roger’s more elusive, childless brother, Daniel Harris Morgan (1879-1958), who, it turns out, married Grace Van Rensselaer Dwight (1876-1963)—the divorced (!) daughter of Hartford’s mayor—eschewed business, and moved to Greenwich Village to squander his inheritance. The couple lived high on the hog, while the money lasted, with three live-in servants (including a chauffeur),[2] European travel, and Parisian couture; they were close friends with the famous avant garde group of artists known as The Eight, especially William Glackens (1870-1938) and his wife, Edith Dimock (1876-1955), a childhood friend of Grace’s and an artist in her own right (with her own inheritance to support the artist’s family). Glackens was a high school classmate of Alfred Barnes, who tapped him to make the initial purchases for his art collection, the nucleus of Philadelphia’s incomparable Barnes Foundation; Glackens remained Barnes’s influential art advisor for years.[3] 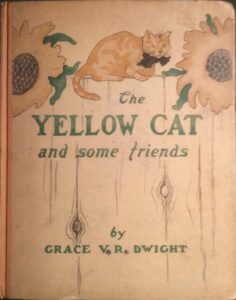 Imagine my surprise to discover that not only had Aunt Grace written a charming book of children’s stories, illustrated by Edith Dimock,[4] but that she appears in William Glackens’s “signature piece”[5] – his “largest and most important work,”[6] “Family Group” – which was first exhibited at the famous Armory Show in 1913, reproduced in LIFE magazine in 1956,[7] and now hangs in the National Gallery! Although Grace was not part of the Glackens family, William’s son Ira said: “Mrs. Morgan … returned from Paris with some fashionable clothes and among them was a stunning creation by Paul Poiret, at that time the leading French couturier. Father liked this brilliant costume and asked Mrs. Morgan to pose in it, and completely reorganized the color scheme of his painting.”[8] Curator Avis Berman says that “Morgan’s addition to the canvas symbolizes the necessity for progressive American artists to recognize and embrace contemporary currents in French art.”[9] Grace and “Dan” Morgan appeared in other Glackens paintings, too.[10]

Not every “genealogical orphan” will turn out to be a fascinating reprobate or appear in a major artwork (or both). But many have played pivotal roles in our ancestors’ lives. After my paternal grandmother Ruby Barrus (1882-1959) and her brother George (1884-1971) were orphaned young, they depended on childless and unmarried aunts from both sides of the family. George recalled that “Mother died when I was 3yrs. and father put us with his sister Theresa [Theresa (Barrus) Peckham (1856-1920)]. Then he died when I was 9 yrs and I staid on until 14 yrs of age when I chose aunt Aggie [Agnes Barton Latta (1844-1915)] as my guardian. Aunt Thres held onto Ruby to wash dishes and do the house work. Ruby was afraid to argue upon choosing [a] guardian at 14 yrs of age. Because Ruby staid with him [uncle William D. Peckham (1855-1928)] gave her $500000 when she bought the house in Haddonfield[, N.J.].”[11] That is the house in which my father grew up.

Aunt Aggie Latta and Aunt Theresa and Uncle Bill Peckham appear to have lived quiet lives in far upstate New York. They made homes for their young niece and nephew and, ultimately, their cash helped provide a stable, secure home for Ruby’s young family through the Depression.

One way the memory of maiden aunts, bachelor uncles, and childless couples lives on is through namesakes.

One way the memory of maiden aunts, bachelor uncles, and childless couples lives on is through namesakes. I have not done a systematic tally, but it seems their names carry on more frequently than those of siblings with children of their own. My grandparents named my uncle Barton Latta Searle in honor of Ruby’s beloved maiden Aunt Aggie, who herself was named for her aunt, Agnes (Latta) Barton (1774-1858). Both my sister and my mother’s cousin were named for my mother’s childless great-aunt, Ellen Lambert (Leeds) George (1869-1958), who was in turn named for her maiden aunt, Ellen Louise Lambert (1837-1914). My maternal grandmother carried her childless aunt’s name [Mary Warren (Leeds) Devens (1874-1925)], and so received all of her monogrammed silver when Aunt Mary died.

You might have a passel of genealogical orphans just awaiting your discoveries, too. Looking back three generations, I find that 36% of my great-grandparents’ generation (the earliest for which I have complete information) who lived to adulthood were either unmarried or childless. In the prior generation I have incomplete information about collaterals in many lines, but 41% of the known adult siblings of my great-great-grandparents were either unmarried or childless. That is a lot of “genealogical orphans.” Because they have no descendants to research them, it’s up to me. I’m sure I’ll find a few more intriguing tales that have been lost to memory.

21 thoughts on “In praise of maiden aunts”