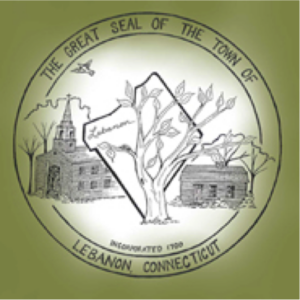 With Patriots’ Day almost upon us, I feel especially lucky to be working remotely from my historic hometown of Lebanon, Connecticut. While many New England towns have their own history during the Revolutionary War, Lebanon to this day is still very much defined by its patriotic past. Although large in acreage, Lebanon has one of the smaller populations. As a small town in eastern Connecticut, Lebanon consists primarily of farms, rural roads, historic homes, and a deep-rooted patriotic history.[1]

Almost 250 years ago, on 19 April 1775, a detachment of British troops set out to seize military provisions at Concord. With the “shot heard around the world” fired at Lexington, the call for troops was soon spread throughout the colonies. A rider named Israel Bessel was sent by the Massachusetts Committee of Safety to spread the alarm through Connecticut. Mr. Bessel rode through Windham County at around noon on 19 April, intent on alerting Connecticut’s Governor Jonathan Trumbull. He reached his destination shortly thereafter, arriving at Governor Trumbull’s home in the center of Lebanon. From that moment on, the town of Lebanon asserted itself in the history of the Revolutionary War.[2]

Located in the center of Lebanon is the town’s main attraction, the Lebanon Green. A mile long, lined with a stone dust path, and lovingly preserved by the town, the Green provides people with chance to take a stroll through history. Surrounding the Green are picturesque farmhouses, churches, town buildings, and historic sites. During the 1770s the Green was first used as a training ground for the local militia before housing half of the Duc de Lauzun’s Legion. The troops camped in the nearby fields and trained on the Green, where they also erected ovens to bake their own bread. The Duc de Lauzun’s Hussars and Light Infantry, under the command of General Rochambeau, were encamped at Lebanon from November 1780 until 21 June 1781, when they rendezvoused with Rochambeau’s army and began their journey to Yorktown.[3] 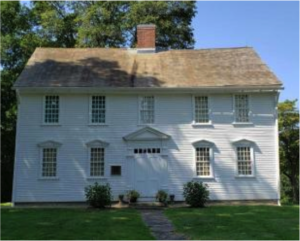 Jonathan Trumbull Sr. played a major role in the Revolutionary War. Not only was he one of only two colonial governors to govern both a British colony and an American state, but he was also the only governor to immediately support the Patriot cause. Governor Trumbull’s house is still standing to this day and is just one of many historical sites located on the Lebanon Town Green. The Governor’s house is currently run by the Daughters of the American Revolution. This home was also the birthplace of all of Jonathan Trumbull Sr.’s children, many of whom would lead exceptional lives themselves. For example, his son John Trumbull was a Revolutionary War veteran, a prominent artist, and became known as the “Painter of the Revolution.” His work has depicted numerous historic figures and important battles; however, his most recognized work is his Declaration of Independence. This piece is currently one of his four paintings housed in the U.S. Capitol Rotunda and can be seen on the back of the two-dollar bill.[4] 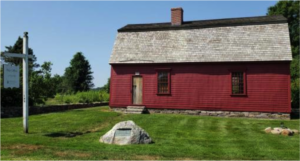 Once reachable by a secret tunnel, Governor Trumbull’s house was closely connected to his store, the building also known as the War Office. During the Revolutionary War, Governor Trumbull converted his store into a military hub. At the War Office, countless plans were made for supplying provisions to the Continental troops. Some of the most famous individuals to attend meetings at the War Office include George Washington, Benjamin Franklin, John Adams, Thomas Jefferson, Henry Knox, the Marquis de Lafayette, the Comte de Rochambeau, the Duc de Lauzun, and numerous other military and political figures. Although it has been moved further down the green from its original location, the War Office is still like stepping into a Revolutionary War version of the Pentagon.[5]

About halfway down the Green is another Trumbull home, this one once owned by Jonathan Trumbull Jr. During the Revolutionary War, Jonathan Jr. enlisted in the Commissary Department and was named Paymaster-General of the Northern Department. He was eventually named military secretary to George Washington, played a major role in the siege and surrender at Yorktown, and even hosted General Washington at his house on 4 March 1781. Jonathan Jr. became involved in politics and was elected to Congress, was the second Speaker of the U.S. House of Representatives, and served as a senator. He later followed in his father’s footsteps and served as Governor of Connecticut 1797-1809.[6]

[When] the French Army was encamped on the Lebanon Green, David [Trumbull] offered Redwood to the Duc de Lauzun to use as his residence and headquarters.

Just across the street from Governor Trumbull Sr.’s home sits a grand red house surrounded by a small vineyard. Built during the Revolutionary War, and designed by builder Isaac Fitch, the house known as Redwood was home to yet another Trumbull. David Trumbull was the son of Governor Jonathan Trumbull Sr. and the first occupant of Redwood. Like his family, David served extensively during the war, most notably as a supplier for Rochambeau’s French forces. In fact, when the French Army was encamped on the Lebanon Green, David offered Redwood to the Duc de Lauzun to use as his residence and headquarters. Although the house is now a private residence, the vineyard is open and active. With all of the history surrounding Redwood, it should come as no surprise that one of their best sellers is “Revolutionary Red.”[7]

What may seem like just another beautiful home in the center of Lebanon is actually another piece of history. Although it is also privately owned, this house is listed as a National Historic Landmark since it was once the home of William Williams. Williams was not only a member of the Sons of Liberty but was one of only three Connecticut men to sign the Declaration of Independence. He was an elected member of the Continental Congress and also attended the ratification of Connecticut’s constitution.[8]

The houses and sites listed above are just a few of the many historic sites located in Lebanon. The Green also houses the Alden Tavern site, the Congregational Church, the Wadsworth Stables, and the house of Dr. William Beaumont. With the diverse historic homes surrounding the Green (and the Green itself), the town of Lebanon truly embodies its nickname as the “Heartbeat of the Revolution.” After years of growing up in Lebanon and many field trips to the Green with its wealth of history, is it any wonder that I ended up working in the history field?

[1] All photos courtesy of the Lebanon Town page: https://www.lebanonct.gov/history-lebanon-ct.

[3] Alicia Wayland, Lebanon and the Revolution. Retrieved 9 April 2021, from https://historyoflebanon.org/local-history/lebanon-revolution/; History of Lebanon, CT, from https://www.lebanonct.gov/history-lebanon-ct.

[5] Wayland, Lebanon and the Revolution.

[8] Wayland, Lebanon and the Revolution.

17 thoughts on “Heartbeat of the Revolution”