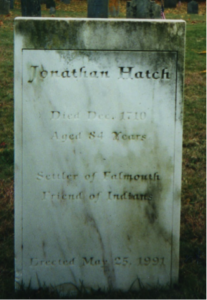 In recently editing an article for Mayflower Descendant, I went down a rabbit hole to confirm the ages of two siblings in seventeenth-century Cape Cod. This concerned the family of Thomas and Grace Hatch, who arrived in 1633, first settling in Dorchester, Massachusetts, then Yarmouth, and ultimately Barnstable (by 1641). From Robert Charles Anderson’s summary in The Great Migration Begins, Thomas and Grace had two children – Jonathan (born say 1621) and Lydia (born say 1625). The reasoning for Lydia’s age was a 1641/2 Plymouth Colony court proceeding, and the assumption that Lydia had to be at least sixteen:

The article I was editing was arguing that the Edward Mitchell in this case was perhaps as young as fourteen! For this reason, I attempted to identify the ages of any of the other characters involved. I could not determine who Edward Preston was, but the Hatch siblings above were summarized as such. Their age in The Great Migration Begins are guesses, and Jonathan did not marry until 1646 and Lydia not until 1650, which, given those ages, would mean first marriages for both in their mid-twenties.

While I could find nothing solid denoting Lydia’s age, I was led to the above gravestone of Jonathan Hatch at Falmouth Old Burying Ground, which says “Died Dec. 1710 Aged 84 Years,” which would imply a birth of around 1627. However, this is clearly a self-identified modern stone, “erected May 25, 1991.” The notes on the Findagrave memorial page wondered if this “truly replaced a former crumbling gravestone.” The short answer is, it doesn’t.

While I could find nothing solid denoting Lydia’s age, I was led to the … gravestone of Jonathan Hatch at Falmouth Old Burying Ground…

Using David Allen Lambert’s A Guide to Massachusetts Cemeteries, he notes a 1903-1904 transcript of the gravestones in this Falmouth cemetery, as well a 1976 compilation of Vital Records of Falmouth, Massachusetts to the year 1850, neither of which have Jonathan Hatch’s death.

Is this date of death accurate? It would make sense, as Jonathan Hatch’s will was dated 15 September 1705 and proved 4 January 1710/11. Using the sources referenced for Jonathan Hatch in Clarence Almon Torrey’s New England Marriages Prior to 1700, the earliest book I found with this information was C.F. Swift’s Genealogical Notes of Barnstable Families (1888), which notes that Jonathan Hatch died “Dec. 1710, aged about 84 years” (exactly like the gravestone above). This source is a reprint of the Amos Otis Papers, which were originally published in the Barnstable Patriot. Through the Yarmouth Library’s digital newspaper archive, you can now search this paper, and the item regarding Jonathan was first published there on 31 May 1864, which is written the same as the 1888 work, without further citation on the death date and age.

Where did Amos Otis get this death date and age for Jonathan Hatch? Was this family information kept for a century and half, or did Otis assume the date based on when Jonathan’s will was proved? Who knows, but a modern gravestone is now remembering it for even longer!

7 thoughts on “What the stone says”