Robert Rhodes’s entry as a pauper in the 1871 England Census provides a snapshot of life in this institution, a place of last resort where he was counted among 306 inmates, slightly more men than women, ranging in age from 4 to more than 80. Contrary to the norm of families with missing parents, the page below, where Robert is listed on line 18, shows one complete family, whereas most of the adult inmates were unmarried or widowed. 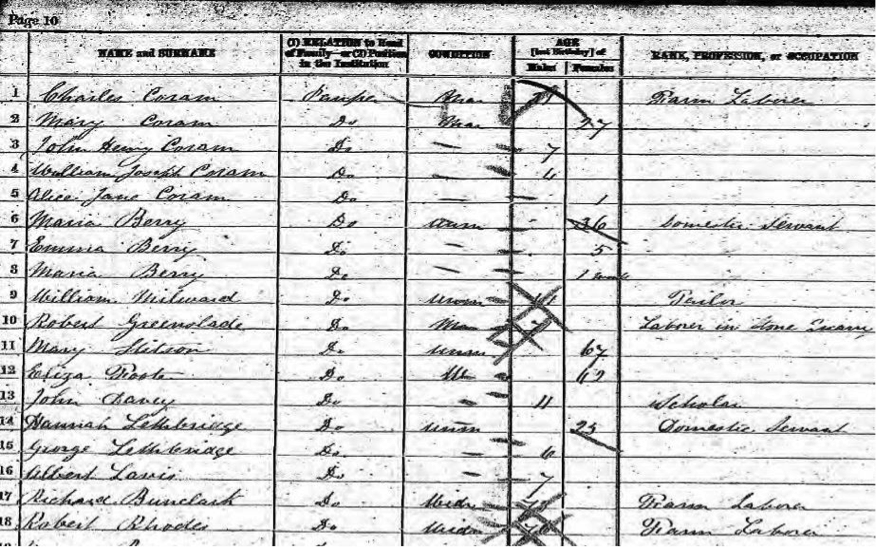 How then did Robert Rhodes come to spend his last years in this place?

A romantic notion that my Rhodes ancestors in Devon belonged to a class of sturdy property-owning yeomen soon evaporated through a trail of records slowly obtained via the Devon Council Trust. Five generations of this Rhodes family preceding Robert, illiterate farm laborers all, moved within a fifteen-mile area around Newton Abbot, leaving little imprint on records save baptisms, marriages, or burials in the records of the Church of England. They experienced high infant and childhood mortality rates. The rigid class structure of Georgian England offered little hope of education or upward mobility for those at the bottom. The youngest of eleven children, Robert Rhodes was baptized in Broadhempston on 24 March 1795. He married, at twenty, to Anne Allen, from the same village. They had six children; four died before reaching maturity. Following Anne’s death at age 33, Robert wed Mary Ann (Cox) Hellyer, a widow, with one surviving child from her first marriage. They had three more children.

In the next decade, Eliza disappears from history…

England’s census for 1841 finds Robert Roads, 45, occupation agricultural laborer; wife Ann, 45; eldest son William, 25; and younger children Eliza, 13, and Henry, 7, living in Highweek, Devon. In the next decade, Eliza disappears from history, and William gets admitted—twice—to the Devon Lunatic Asylum in Exminster. As counted in the 1851 census in the village of Wolborough, Robert Rhodes, 57, gardener, lived with wife Ann, 57; son Henry, 17, also a gardener; and John Rhodes, age 6, Eliza’s out-of-wedlock child. Still in the same location in 1861, Robert and Ann’s household now included two boarders but no other family members. When Ann died in 1868, it left Robert in the vulnerable position of having outlived all his children.

In the meantime, Henry Rhodes, 19, married Mary Voysey of Kingskerswell, both signing the church register with their marks. Four children, beginning with William Henry Rhodes, soon followed. As industrial change transformed villages and towns, Henry then sought work in a big city, as evidenced by his young family’s residence near London, where they were counted in the 1861 census. Only months after the census, Henry returned to Kingskerswell, where he died, age 27, the cause of death a gastric ulcer. His widow, Mary, outlived him by nine months, leaving their four children as orphans. One would expect the Rhodes children to have been relegated to a workhouse, but their Voysey grandparents intervened to take them in, as the 1871 census reveals.

Remarkably, even before the passage of compulsory education laws in England, William Henry Rhodes received an education at the Kingskerswell National School, founded by the Church of England. In October 1865, the school governors awarded William a Bible for regular school attendance. This treasured family possession has been handed down over four generations. On its flyleaf, William later made a family record, a personal milestone as well as an indicator of burgeoning literacy among a new generation.

Undoubtedly the ability to read and write opened more doors for William than his grandfather Robert could have experienced. In his teens William worked as a railroad porter and a telegrapher. The year 1873 proved pivotal. In January, William married Mary Jane Fragell. Right after the birth of their son Thomas Albert Voysey Rhodes on 17 May 1873, William left Liverpool aboard the ship Malta, arriving in Boston on 6 June 1873. I am struck by the timing of Robert’s death in the workhouse and William’s emigration to America. In the end, Robert Rhodes did not escape the grinding poverty into which he was born. Grandson William Henry Rhodes chose a different path. I wonder if William bade farewell to his grandfather in the workhouse? Curiously, though William fathered eight sons, the name Robert is not found among his descendants.

William Henry Rhodes did not find the streets of America paved with gold. As a stonecutter and mason, he moved frequently before settling in Westerly, Rhode Island in 1890. Having outlived three wives named Mary, he enjoyed a vigorous life amid children and grandchildren. He continued to work at his trade until weeks preceding his death at age 87. Among the many memories shared by family who remembered him is that he always poured out his tea from the cup and drank it in the saucer, a habit that came with him, along with his dropped H’s, from England.

15 thoughts on “A different path”